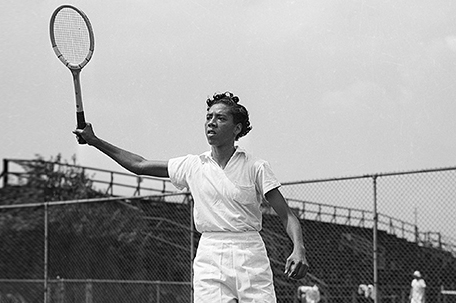 This fall, Thirteen’s “American Masters” presents Althea, premiering nationwide Friday, September 4, 2015 at 9 p.m. on PBS (check local listings) during the U.S. Open.  The 90-minute documentary reveals the highs and lows of this remarkable athlete whose life and achievements transcend sports and have entered the annals of African American history. From her roots as a sharecropper’s daughter in the cotton fields of South Carolina, to her emergence as the unlikely queen of the highly segregated tennis world in the 1950s, her story is a complex tale of race, class and gender.

In recounting Gibson’s story, the filmmakers were meticulous in finding period imagery, including over 450 vintage photographs.  Producer and director Rex Miller weaves this archival visual material and interviews with those who knew Gibson, such as former New York City Mayor David Dinkins, Wimbledon champions Dick Savitt and Billie Jean King (who also serves as one of the film’s executive producers), Jeanne Moutoussamy-Ashe, widow of Arthur Ashe, and more.

Gibson was born in Silver, South Carolina on August 25, 1927. At the age of 3, her father moved the family north migrating to Harlem in 1930. Gibson was a tomboy who grew up loving sports, but disliked school so much that she started skipping classes at the age of 12 and, by 18, had dropped out of high school.  She played basketball, but “…paddle tennis started it all,” says Gibson, in a clip from a 1984 interview. 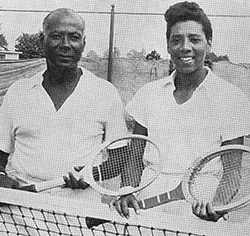 She learned to play that sport on the streets, but it was bandleader Buddy Walker, who was also the neighborhood play street director, who introduced her to tennis and The Cosmopolitan Club, a private black tennis club.

At the club, she met Fred Johnson, the one-armed coach, who taught her how to play. Under the auspices of the American Tennis Association (ATA), an organization of African American players, she began to develop as a tennis player.  It was during this time that she met boxer Sugar Ray Robinson, who would become a friend and mentor.

Though a talented tennis player, Gibson was a street kid who lacked the genteel manner associated with the sport. It was under the tutelage of Dr. Hubert Eaton of Wilmington, North Carolina and Dr. Robert W. Johnson of Lynchburg, Virginia, two African American physicians who loved tennis and helped young African Americans who wanted to play, that she flourished.

She honed her skill, while receiving lessons in etiquette and the social graces, traveled and played in the segregated south, and even earned her high school degree.  Her success in tennis earned her an athletic scholarship (basketball and tennis) to Florida A&M, where she received a BA in 1955 at the age of 27. Yet, with all she achieved, she never felt comfortable with the black middle class.

Gibson’s first appearance at the U.S. Nationals in 1950 is an extraordinary and dramatic story. Her triumphant return seven years later to win the U.S. Nationals in 1957 and then again in 1958 has been attributed to her coach at the time, Sydney Llewellyn (her second husband). In 1957 and 1958, Gibson was at the top of her game, winning major tournaments including at prestigious Wimbledon.

Though now a world champion, Gibson was unable to make a living playing amateur tennis. In 1959, she turned professional, touring with the Harlem Globetrotters and played paid exhibition matches. Branching out to other areas, she recorded a jazz album for Dot Records, appearing on “The Ed Sullivan Show,” and even landed a role in a John Wayne/John Ford movie, The Horse Soldiers (1959), In the 1960s, she took up golf and in 1964 she became the first African American woman to become a member of the LPGA (Ladies Professional Golf Association).

In 1965, she married the love of her life, William Darben. Angela Buxton, Althea’s doubles partner and friend, and Sandra Terry, Darben’s niece, speak lovingly about their relationship, though Gibson and Darben’s marriage ended in 1975. Gibson would remarry in 1983 to former coach Llewellyn. Art Carrington, ex-professional player, tennis historian and Athea’s friend, recalls she married Llewellyn because she was invited to bring a spouse on a trip for former champions. Buxton shares that they were just very good friends and that Gibson felt Llewellyn had done a lot for her. Five years later, this marriage also ended in divorce. Gibson and Darben remained close, reuniting towards the end of her life.

By 1968, Gibson had stopped competing and for a while worked as a tennis teaching pro.  In the years that followed, Gibson found it difficult to make ends meet. Was her failure to achieve financial success partially her own doing? As portrayed in the film,  Gibson is crushed when she is turned away — unrecognized and unwelcome — at the on-site restaurant on U.S. Open Championship Day.

Depressed and impoverished, in 1996, Gibson called Buxton to say goodbye. In a generous outpouring of financial support, orchestrated by Buxton, the tennis community showed Gibson she was not forgotten. Gibson died September 28, 2003. She was 76.

Though Gibson’s accomplishments put her in the forefront of the struggle to eliminate segregation in tennis and to gain equal rights for players, she was a reluctant figure of the civil rights movement.  “As far as Althea was concerned, it was not about representing the race,” says Arvelia Myers, Althea’s friend and tennis professional.  Says Billie Jean King, “Arthur and I used our tennis as a platform, that’s not what she wanted. She just wanted to play.”

“Gibson’s athletic prowess was unmatched on the tennis court, making her a formidable competitor,” says Michael Kantor, executive producer of American Masters and tennis enthusiast. “Her story remains an important part not only of sports history and African American history, but of American cultural history.  American Masters is proud to share the story of this trailblazing athlete and extraordinary woman.”