There’s Something Fresh About “Something Rotten!” 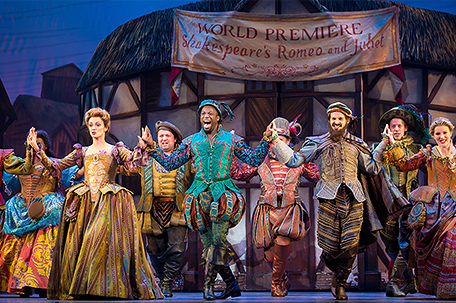 By Kharisma McIlwaine
Imagine if you will, a world where poet extraordinaire William Shakespeare is a bonafide rock star level celebrity. Now imagine how you would feel if you were a lowly competing playwright during the Renaissance era without any of Shakespeare’s accolades.

Set in South London in 1595, “Something Rotten!” tells the story of the Bottom brothers and what the quest for success can drive people to do. Nick, an unsuccessful playwright, and his hapless, romantic brother Nigel, playwright by day, but a poet at heart, are on a mission to finally write a hit play. Nick’s lack of inspiration amplifies his fears of being a good provider for his wife Bea and his unborn child… all of which eventually lead him to desperation. After seeking the help of the soothsayer Nostradamus to predict the future of theater, Nick finds himself falling down the rabbit hole as he attempts to create the world’s first musical.

“Something Rotten!” debuted on Broadway in 2015. Real life brothers Karey and Wayne Kirkpatrick conceived the music and lyrics. The book was written by Karey Kirkpatrick and John O’Farrell, and the production directed and choreographed by Casey Nicholaw. Now Philadelphia welcomes the 10-time Tony nominated musical “Something Rotten!” for the first time, and this endless adventure is one theater goers will never forget!

From the moment the first actor steps on stage, the spectacle that is “Something Rotten!” draws the audience in for a non-stop ride. The tongue-in-cheek style of the show brilliantly combines elements from past and present to create a perfect balance of nostalgia and carpe diem. Musical numbers like “God, I Hate Shakespeare” stand out with hilarious lyrics like, “And that’s another thing I hate about Shakespeare! Is all the twits who bloviate about Shakespeare! And how they prattle on about his great accomplishments, well la-di-da-di-dah! And once they start their gushing there’s no stopping them.”

“A Musical” is equally as entertaining as Nostradamus tries to explain the concept of a musical through the use of lively lyrics, full out tap dancing sequences, and chorus line choreography complete with feathers and sparkle. The musical references within this musical borrowed from “Cats”, “Chicago”, “Annie”, “Rent” and many more add to the fun as audience members find themselves in a game of name that tune. The music and lyrics are undeniably clever and the cast a force!

The chasm between Shakespeare and the Bottom brothers, the deceit that marries Nick’s attempt to finally be at the top, Nigel’s forbidden love of Brother Jeremiah’s Puritan daughter Portia, the outstanding choreography, and the set design all add something very special to the production “Something Rotten!” Another element of the story that is sure to make audiences smile is art imitating life with the real life love story of on-stage and off-stage husband and wife Rob McClure (Nick Bottom) and Maggie Lakis (Bea)… both of which happen to be Philadelphia natives.

The truth is there’s nothing rotten about “Something Rotten!” On the contrary, it’s a real treat! “Something Rotten!” will be at The Academy of Music, Tuesday, February 27th through Sunday, March 4th. This is a show you absolutely do not want to miss! For more information on tickets and show times visit www.kimmelcenter.org.