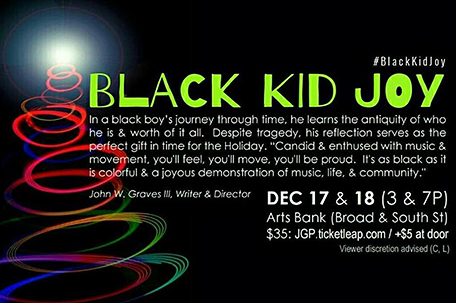 The expression “Those who don’t know their history are doomed to repeat it.” is a familiar one. This piece of imparted wisdom is one of many themes that ran throughout the musical production, ‘Black Kid Joy’. Philadelphia native, John W. Graves III commemorated his 30th birthday and the 10th anniversary of his non profit production company John Graves Productions, with ‘Black Kid Joy’ as his 10th stage production. The multi-faceted writer, producer, composer, choreographer and director packed the theater of The Arts Bank at Broad and South on Saturday, December 17th and Sunday, December 18th for two out of three sold out shows.

The opening scene of ‘Black Kid Joy’ begins with a child named Chris (played by Kai A. Thompson), who is gunned down as a result of senseless gun violence in front of his parents. After his death, Chris arrives at a place called “Melanin” where the beauty and uniqueness of blackness is celebrated in the form of a never ending party. He travels through time struggling to accept his fate, longing for his parents, all while attempting to absorb the new knowledge of his true identity as a young Black man. Various figures throughout history including Rosa Parks, Dr. Martin Luther King Jr. and Mrs. Mamie Till the (mother of Emmett Till) remind him of his roots with the mantra “you are Black, you are brown, you are yellow, you are gold.”

Throughout ‘Black Kid Joy’, the audience is faced with some harsh truths; our men and women are dying at an alarming rate. Images of Black men covered with bullet wounds, blood stained shirts, and nooses sing words of warning against the violence plaguing our communities as a ineffective solution to an identity crisis. A negative self image manifests in a number of ways.  Taking a life has less value when the person killed is viewed as worthless by most. The symbolism of the violence once used to enslave Black people vs the violence currently killing so many brothers and sisters was jarring and powerful.

The large ensemble cast poured out a number of songs, throughout the first and second acts. The gospel elements, and soulful melodies are piercing; the harmonies intricate and non-conventional. The musical numbers paired well with a mixture of traditional African dance, contemporary dance, and modern  choreography.

The message was clear, don’t let the world dictate who and what it means to be Black. The most powerful line from the musical was, “Freedom starts in the mind.” If you missed ‘Black Kid Joy’ the first time around there will be an encore performance at The Arts Bank on January 14, 2017. Visit JGP.ticketleap.com for additional details.