Theatre in the X goes virtual with “Running Numbers” screening 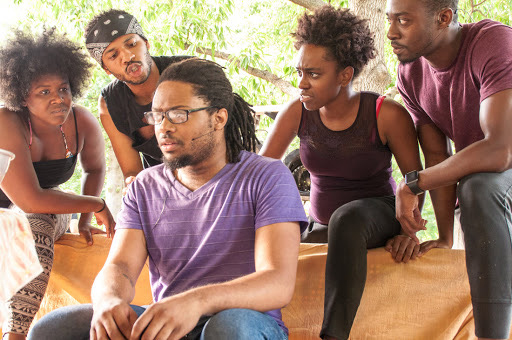 We’ve reached the one-year mark of COVID-19 and the subsequent shut down. As a direct result, creatives are still seeking innovative ways to share their gifts while adhering to social distancing guidelines. Among those creatives is actor and producer Carlo Campbell.

As one of the founders of Theatre in the X at Malcolm X Park, Campbell has been sharing performance art for years. In 2017, Campbell and his team presented a production called “Running Numbers”, a play written by Cheyenne Barboza and directed by Starfire. “Running Numbers”, which was inspired by the poem “Financial Aid” by Carvens Lissaint, tells the story of an inner-city high school senior whose dreams of going to college quickly turn into desperation. “Running Numbers”, stars Abdul Sesay, Jarrett McCreary, Khadijah Davis, Iman Aaliyah, Aurica Hurst, Angelica Jackson-Thomas, Carlo Campbell, Walter DeShields, Niya Colbert, Brandon A. Drummond and Dwayne Alistair Thomas. Katrina Shobe serves as the stage manager for the production. Campbell spoke to The SUN about how Theatre in the X was birthed and the upcoming virtual screening of “Running Numbers”.

Theatre in the X was created in 2013 as a concept among a group of friends and has continued to grow since its inception.

“I started Theatre in The X with just an idea to get busy in the park.” said Campbell. “There were always people doing things at places like Clark Park and in Central Park in New York. I lived in West Philly for a good part of my life and I’ve been around Malcolm X park my whole life and I never saw anything like that at that park”, he added. “I went to Walt (DeShields), who is one of my best friends and said we should do a play in the park and he said yes. At the time LaNeshe (Miller-White) who is also one of the founders, just happened to be next to him. Walt knew what she was capable of administratively and asked if she would help us fill out paperwork to get some grants. She said yes, and that’s how it began. It began as a labor of love and an offering to the community.”

After opening with Amiri Baraka’s “A Black Mass”, people wanted more of Theatre in the X. Fast forward to 2017 when Theatre in the X put on the first production of “Running Numbers”, a work that is relatable on a number of levels.

“It was a departure from a lot of what we had done before. It was the first play we did with a bit of rough language. We had done a lot of upright stuff and works that highlight historic figures prior to that. This was more down to earth and modern. It dealt with some subject matter that people in our community could deal with in the immediacy of the moment… like going to college, all of the hardships and how you navigate that”, said Campbell. “In Carvens’ poem, he metaphorically and allegorically sticks up a bank for all of the financial aid. It’s witty and it led Cheyenne on the journey creatively to come up with “Running Numbers”.”

After revisiting some old footage, Campbell came across an old recording of “Running Numbers” that a videographer documented. After their productions were cancelled last summer due to COVID-19, it seemed like the perfect opportunity to be innovative and move forward by sharing the recording of Running Numbers with the public.

“It’s such a strong piece and this was my way of saying we can ceremoniously visit the park through the eyes of the past and that’s kind of what was the springboard for this”, Campbell stated. “Sometimes when we’re in the park we’re so busy with the production that we can’t enjoy it for what it is. This time we get to enjoy it with the people who enjoy it, consort, chop it up and respond to their take on things in real time. It’s going to be one day and we’re all going to revisit it together online.”

The one-day only screening of Running Numbers will take place on Thursday, March 11, 2021 from 7-9 pm. Tickets for “Running Numbers” are free and available at theatreinthex.ticketleap.com. If you are able to donate to Theatre in the X without it being a hardship you can do so at the previous link.