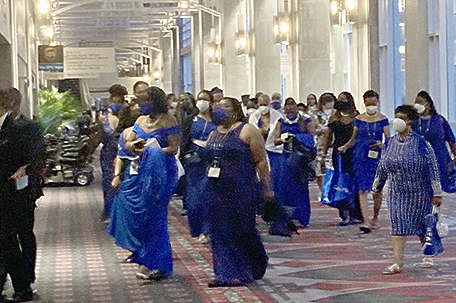 A grand affair, last week’s convention will go down in Philadelphia history.

Over 6,000 enthusiastic participants registered for the Zeta Phi Beta Inc. 2022 Grand Boulè convention. The event took place at the Philadelphia Convention Center from July 18 through July 24, marking the first time that the Zeta Phi Beta Inc. sorority was able to convene since the start of the pandemic in 2020.

This year’s Grand Boulè theme was “Honoring our founders, continuing their legacy, the dream lives on.”

During the convention, members of the sorority gave back to the Philadelphia community in a big way, donating over $600,000 and bringing internationally known artists, speakers, and performers to the Grand Boulè main stage.

“It was an absolute honor to celebrate our 2022 Grand Boulè in Philadelphia this year,” said Valerie Hollingsworth Baker, international president of Zeta Phi Beta Sorority, Inc. “Over the week-long period, our sorority brought over 6,000 members to the city, provided over $640,000 in donations, and left behind an economic impact of over $6.5 million.

With scholarship being a principle I hold in high regard, I am especially happy that Zeta Phi Beta provided a $125,000 scholarship to a deserving high school student as she embarks on a college education.”

“I am so pleased and proud to welcome my sorors, the finer women of Zeta Phi Beta Sorority, Inc., to the great city of Philadelphia, the City of Sisterly Love,” she said.

During the week of sorority business meetings, service-oriented projects, and celebratory moments, Gilmore Richardson, in partnership with the Free Library of Philadelphia and Unity Unlimited, welcomed a special visit from educator, activist, and Zeta Phi Beta Sorority, Inc. member Opal Lee, known as the “Grandmother of Juneteenth” for her efforts to see Juneteenth recognized as a national holiday. Lee read her acclaimed book “Juneteenth: A Children’s Story,” which aims to teach young audiences about the history and significance of the holiday.

“Ms. Opal Lee is an incredible woman whose relentless dedication has allowed her to answer the call for African American rights for over 50 years,” Gilmore Richardson said. “As a fellow member of Zeta Phi Beta Sorority, Inc., words cannot express my gratitude for her hard work and unwavering commitment to making Juneteenth a federal holiday; she is the true ‘grandmother’ of Juneteenth.”

The Boulé also included two award ceremonies that honored Lee. A donation of $130,000 was also made to Jefferson Hospital’s neonatal intensive care unit by the sorority, with $10,000 of the donation coming from lifetime members. More than half a million dollars was awarded to community partners in total.

“It feels good to be in Philadelphia,” said Bevy Smith, TV personality and best-selling author. “I’m so very excited to be here with you as we celebrate the wonderful accomplishments of Zeta’s members.”

Smith hosted the Zeta Phi Beta Inc. Grand Boulè 2022 Gala Awards Banquet. She joined the organization in 2019 in New Orleans for a charitable event and was excited to reconnect with the Zetas in Philadelphia.

“These are such inspiring women that give themselves all the time,” Smith said. “They’re always doing great service. They raised over $600,000 for charity this weekend alone and it’s great to be a part of that magic.”

As the women adorned in navy blue and white hit the streets of Philadelphia, they personified the true meaning of excellence.

While holding down their reputation for being known to work hard, the fine women of Zeta Phi Beta Inc. also know how to have a good time.

“We have a fun side to Zeta, too,” Hollingsworth Baker said. “I wanted to make sure that my members had the best entertainment possible so that they can really enjoy themselves and party and have fun.

So this year, in the city of brotherly love and sisterly affection, we’re bringing to the main stage for one night only, a private performance by the legendary Mary J. Blige.”

In addition to their generous gift to Thomas Jefferson Hospital, Zeta Phi Beta awarded St. Jude’s Hospital with $200,000 and presented a check in the amount of $45,000 to Micah’s Voice to support children with autism.