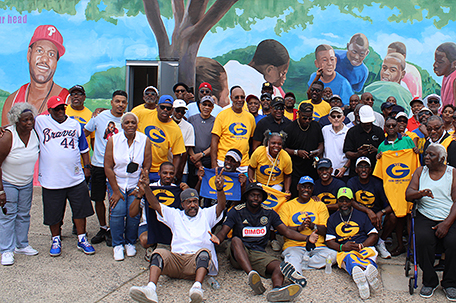 ABOVE PHOTO: Group photo of participants at the Young Great Society Reunion in Mantua (Photos by Jim Brown)

During a recent reunion of the neighborhood’s old players, coaches, and administrators at Miles Mack Playground, Mantua residents reflected on its 58-year-old past, recalling a childhood that few could have imagined possible.

In many African American neighborhoods at the time, youth organizations represented a “field of dreams” where young people participated in activities that could change their lives.

Dr. Herman C. Wrice and community leader Rev. Dr. Andy Jenkins started the Young Great Society in Mantua in the 1960s and 1970s, providing youths with an alternative to poverty and violence.

Over 200 people attended the reunion and shared stories about their childhoods in “the Bottom” and being a part of the organization.

“It’s one of the greatest reunions that I have ever witnessed in my life,” Jenkins said. “I thank God that he allowed us to reach down to help the younger generation. And I thank God that Donald Grady and I lived long enough to see the greatness of the Young Great Society.”

Through the afterschool, anti-gang violence and sports programs created through the Young Great Society, Black kids were able to play in a safe playground, join sports teams, be part of majorette teams, cheerleading teams, Cub Scouts, take trips to other cities, states and even out of the country.

Wrice’s goal was to give the young people of Mantua hope of a better life.  Many of them were able to do just that.

Also celebrated at the reunion were Jean Wrice, the widow of the late Dr. Herman C. Wrice, Rev. Dr. Andy Jenkins, Donald Grady, Freida Williams, Bill Thorpe and others who gave kids in Mantua a childhood they will never forget.

“I think the reunion is great,” said 82-year-old Grady, one of the coaches. “Outstanding! I wish more people would have attended. But, this is a great turnout that we did have. We get to see all of the young men that we coached and how they’ve grown up and how their mannerisms are, and I think they did a great job putting this together.”

During the event, Mayor Jim Kenney recalled the days when he played against some of the Young Great Society Giants in 1972. Kenney was also able to meet Keith Robinson, the best player in the organization.

Ronald “Ron Boo” Brown spoke about that team and Robinson, who was his quarterback.

“It was truly, truly extraordinary (playing with Robinson),” Brown said. “The team itself had a lot of energy, a lot of wisdom and a lot of determination. We were well coached by the late Gene Hope, and Keith Robinson was a natural born leader.”

Kenney, who still has his yellow football weight class ID from 1970, shared it with those in the room. Everyone there said they wished they still had their cards.

“I experienced the Young Great Society firsthand back in the ‘70s while playing football in South Philly with the Edward O’Malley Athletic Association,” Kenney said. “Actually, this was the first group of African American athletes we ever encountered. [There were] interesting lessons we all learned by playing against each other.”

The organization provided a vital foundation for the neighborhood’s children, something that is sorely needed these days given the proliferation of guns and violence in the city, Kenney said.

There was an exhibit in the Miles Mack meeting room that told the story of Dr. Herman C. Wrice, his legacy, and how he worked with others to address issues and concerns facing young people during that time.

It was nice to reunite with many of the people who were touched by the organization, Jean Wrice said.

“I’m glad to see that his legacy (Dr. Wrice) is going on and that’s very important,” she said.

Your legacy in Mantua is deeply imprinted on each of us, Dr. Wrice.