The Tatum Talks: Dear Broadway, ‘A Raisin in the Sun’ has shriveled up 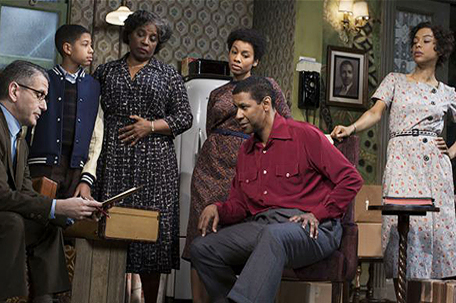 ABOVE PHOTO:  A scene from the Broadway play, A Raisin In The Sun.

Everyone should see it, but not on Broadway. Hear me out…

”A Raisin in the Sun” is an American classic, beautifully penned by playwright Lorraine Hansberry.  Originally staged in 1959, the story centers around the Younger family and their struggles to escape a dilapidated apartment on the south side of Chicago, while its main character struggles to rise above the dilapidation of his spirit in a racially tense setting.

Starring the incomparable Denzel Washington as Walter Lee Younger, this historic play has made its way back to Broadway for the third time.    Directed by Kenny Leon, a stellar cast featuring LaTanya Richardson Jackson, Anika Noni Rose and Sophie Okonedo supplies a firm foundation for an excellent show.

So, what’s my issue?  Show BUSINESS.   ‘Raisin’ was first revived just 10 years ago with a mediocre Sean Combs carrying the lead.  Thanks to a booming bottom line, a mediocre TV film was released by ABC in 2008.  As much as we see African-Americans on their stages, “The Great White Way” still lives up to its ironic nickname by pigeonholing us into roles of impoverished struggle (we’re only discussing plays, not musicals).  Our stories have been deemed uninteresting unless it spotlights stories set in the ghetto or leading up to the Civil Rights movement .

Washington dashed my hopes the most.  As a commanding artist, he could have used his star power to greenlight just about any project he wants.  Approaching his 60s, he instead decides to portray a character that is 35.  Perhaps portraying Walter Lee was a “Bucket List” item (I mean, he IS approaching 60), but I just wish he would have used his influence to get Broadway to bring a fresh idea to the forefront.

We have become too comfortable simply being employed that sometimes I don’t think we care about HOW we’re employed.  Either it’s a staging that has been regurgitated many times over (‘Raisin’ and “Porgy & Bess”), or a pointless all-Black re-casting of classic pieces such as “Cat on a Hot Tin Roof” or “A Trip to Bountiful”.  (Have you ever seen an all-White cast replace an August Wilson piece?  Exactly.)  Why not invest in plays that cast blacks in original, colorblind plots or struggles that don’t involve race?  People will pay top dollar to see Denzel act his way out of a Ziploc bag, let alone a quality modern tale.

‘Raisin’ should always maintain a pulse in theaters across America; it is a legacy that should be passed down to every generation regardless of race.  Broadway, on the other hand, needs to promote new and exciting projects that represent the other side of OUR story instead of only satisfying palates that want to see us in downtrodden lifestyles.

Tanya Tatum is the opinionated host of “The Tatum Talks,” a live Blog Talk Radio show focusing on African-American interests.  Feel free to join in on the weekly madness every Wednesday night from 9-10p EST at www.blogtalkradio.com/thetatumtalks and daily at www.facebook.com/thetatumtalks.  She can be reached via email at [email protected]