The System Is “Rigged” 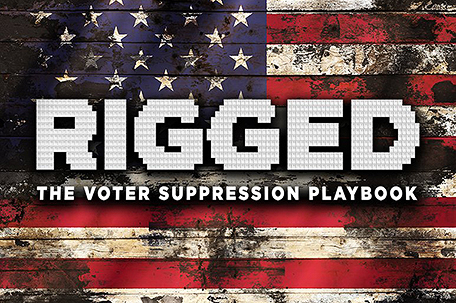 The documentary “Rigged: The Voter Suppression Playbook” shows that there is voter fraud, but not the kind you think.

A few years back, former Pennsylvania Gov. Tom Corbett and the Republicans in the State Assembly tried to put forth a law requiring voters to have a state ID in order to exercise their franchise.

When many Pennsylvanians got wind of what the law entailed, they thought of the people living below the poverty level and the senior citizens that might not have the birth certificate, the other documents or the money needed to get the driver’s  license or other state ID.

In response to this law, which would have nullified some of the forms of ID for voting that people in Philadelphia have traditionally used including utility bills, people from around the Commonwealth took to the streets, and organizations like the Pennsylvania NAACP and the Pennsylvania ACLU filed court challenges to keep the law from taking effect. In the end, it was struck down.

And with that, Pennsylvania avoided being one the many states that signed on to the Voter Suppression Playbook that is detailed in the documentary, “Rigged.”

Director Michael Kasino’s “Rigged: The Voter Suppression Playbook” tells the story of the shenanigans that have made exercising that whole right to vote thing harder of late. From gerrymandering to voter ID laws to court packing and straight up voter intimidation, the playbook includes it all.

Narrated by “Westworld”’s Jeffrey Wright, “Rigged” begins with the election of President Barack Obama and tells a story about the real people whose lives have been impacted by this playbook on both sides of the aisle.

And I can tell you right now that if the right to vote is important to you, there’s a whole lot about “Rigged” that’s gonna make you mad.

You’re going to be mad when you see members of North Carolina’s so-called Voter Integrity Project challenge people’s right to vote through sending them letters and making them come to a challenge hearing that wouldn’t be allowed to happen if North Carolina Republicans weren’t so dedicated to making sure people couldn’t vote. When I saw them in action, I asked myself, “Do you work for the Secretary of State? Where do you get off?!”

You’re going to be mad when you see people like Karen Wilson-McCoy who wasdenied the right to vote due to one of these purges in 2016, but got that right back when the courts struck down a North Carolina voter ID law that judges said “targeted” Black voters when performing voting roll purges.

You’re going to be mad when you see Manuel Rodriguez of Edwards County,Texas in jail for voter fraud at the hands of Sheriff Pam Elliott, who kept him there for 18 months without a trial and seems to be accusing everyone Brown in her town of voter fraud.

And you’re really going to be mad when you hear Republican operatives keeping it 100 percent real about how the desire to stay in power in spite of the changing demographics of the country is driving all of this, something that made the complaints of Voter Integrity Project folks about being called racist more than a little disingenuous.

But while “Rigged” is going to make you mad because of the voter suppression itself, it’ll also make you a little hopeful because you’ll hear from the people fighting the often uphill battle to keep it from happening, a battle made even more uphill by the election of Donald Trump as president and his packing of the courts with people who want to ignore just how infrequent voter fraud actually is.

It’ll also make you hopeful as people point out the importance of state legislatures and how the problem can be solved by voting people out who want to suppress the vote.

“Rigged: The Voter Suppression Playbook” is a documentary that everyone one should see as we head into this election cycle because the playbook is for the most part complete now.

But who really needs to see it is all of those folks who decided to take the 2016 election off. Just saying…

“‘Rigged: The Voter Suppression Playbook” can be found on ITunes, Amazon.com, and at www.riggedthefilm.com. Check it out if you can.