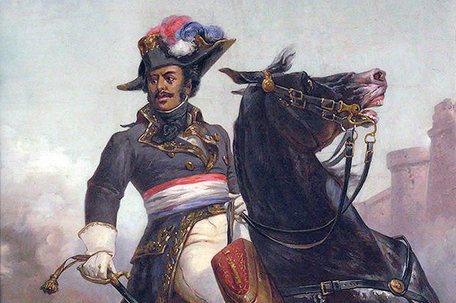 ABOVE PHOTO:  The Black Count

In addition to the Sony Pictures feature film that was announced in April (with John Legend’s Get Lifted film production company), comes news today that Spike TV has put in development a “The Count Of Monte Cristo” TV serial project with “a contemporary and high-octane action and political twist,” says Deadline.

It’s said to still be in the early stages of development, so no other details are available.

Of course, we here at S&A are most interested in the casting of any project based on the Alexandre Dumas classic novel, which was based on the life of his father.

Alexandre Davy de la Pailleterie, aka Alexandre Dumas, aka “Black Devil” by some of the armies he fought against (let’s just say he was good at his job), aka The Black Count, is the subject of the 2013 Pulitzer Prize-winning book from acclaimed author Tom Reiss, titled “The Black Count: Glory, Revolution, Betrayal, and the Real Count of Monte Cristo.”

It’s a riveting, well-written story that reads with all the thrills of a novel written by Dumas’ son, likely the most popular Dumas, also named Alexandre Dumas, author of literary classics like “The Count of Monte Cristo” and “The Three Musketeers.”

Dumas, the father of the author, is the figure at the center of Reiss’ riveting “The Black Count,” and which is encouraged reading.

In short, his life is/was the stuff of legends, and became fodder for his son’s novels. “The Count Of Monte Cristo” and “The Three Musketeers” for example, were, in part, based on Dumas, the father’s real-life story; his ending just wasn’t as happy as it was for the fictional count in the 2002 film that most are probably familiar with, starring Jim Caviezel and Guy Pearce (there’ve been several film adaptations of the novel, however).

Dumas, the father, The Black Count, was born in Saint-Domingue (present-day Haiti) in 1762, the son of a black slave woman and a rebel French aristocrat. He was briefly sold into slavery but eventually made his way to Paris where he was schooled as a sword-fighting member of the French aristocracy. Enlisting as a private, through pure ability, skill and determination, he rose up through the ranks rather quickly, and would eventually command armies at the height of the French Revolution, in audacious campaigns across Europe and the Middle East.

He wasn’t only a great soldier, but also became the highest-ranking black leader in a *modern* white society, at that time. By the age of 32 he was appointed commander-in-chief of the French army, which is the equivalent of a four-star general here in the USA.

Initially praised and loved by Napoleon for his daring, heroic battlefield feats, the same Napoleon would eventually come to despise Dumas for the same reasons he liked him in the first place – his independence and revolutionary ideals which dictated his approach to war, and earned him victories, as well as the respect of both his friends and enemies.

The last years of his life were unfortunately spent in captivity, before he would be released, all his accomplishments virtually forgotten, eventually dying of an incurable illness at just 43, in poverty, leaving a wife and three children – one of them being Alexandre Dumas, the son, who would go on to become the prolific and notable author.

While Dumas languished for two years in an enemy dungeon, Napoleon made himself dictator and destroyed the “post-racial” society that was France at the time, imposing cruel race laws, and re-instituting slavery in the colonies. Napoleon then went to extraordinary lengths to completely bury the memory of Alex Dumas, ensuring that he was all-but forgotten, until recent memory.

His story was ruthlessly suppressed by the country he practically gave his life to (France), and remained buried for some 200 or so years.

The book itself is both a riveting true action/adventure story of this one man’s life, as well as a peek into what was essentially the modern world’s first multi-racial society. The author provides just enough crucial back-story, before diving into Dumas, the father’s own narrative. In fact, he doesn’t get to Dumas’ story until about 60 pages in – we first learn about his father, his mother, what the world, and specifically France and Haiti (the two key locations in which the novel unfolds) were like in that century (the 1700s primarily), and how the landscape changed over time.

The Black Count was actually born Thomas-Alexandre Davy de la Pailleterie (his aristocrat father’s name), but he would eventually take his slave mother’s surname when he enlisted, becoming simply Alexandre (or Alex) Dumas.

Cary Fukunaga is set to adapt and direct the Sony film. No word on casting on that project. Also no news on who will star in the Spike TV project based on the novel. But I certainly wouldn’t be surprised if casting on both projects goes as it did with the casting of the 2002 film that starred Jim Caviezel and Guy Pearce.

If you’d like to read the book, go to HERE to pick up a copy.