The story behind ‘Santa Baby’ 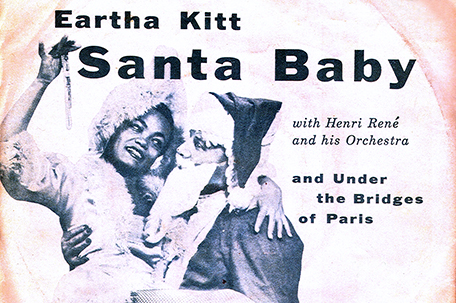 Eartha Kitt, who made the popular song famous in 1953, died on Christmas Day in 2008

Back in 1953, songwriter Philip Springer wrote the lyrics to “Santa Baby” in about 10 minutes inside his Manhattan apartment, with the help of his music partner Joan Javits. However, he didn’t believe the song would be a hit, much less consider it would be a song people would make famous for decades to come.

Despite his low expectations, Springer decided to give the song to Broadway star Eartha Kitt, who needed a song to help get her music career on track. So taking a gamble, Kitt made the decision to record “Santa Baby” — a song that was sassy with a little edge to it, but seemed to be pretty harmless enough.

The producers thought the song was a little sexy; but after hearing the lyrics, they knew the song would be a hit.

Joe Carlton, the head of RCA Victor Records at the time, almost lost his mind when he heard the tune. He flipped and jumped on the phone to contact RCA music arranger Henry Rene’ and asked him to work on the track.

They brought in Kitt and recorded the song. When the song hit the radio station airwaves, a classic was born.

After its release in 1953, “Santa Baby” became a big hit for the holiday season. It became the top selling Christmas song of the year, selling over 620,000 copies. However, despite the record’s success, quite a number of people became upset over the song’s tawdry lyrics. Many people around the world thought the song was too sexy for virgin ears. It had gotten so bad that the King and Queen of Greece wanted “Santa Baby” removed from its theater performance. They didn’t want Eartha Kitt to perform the song ever again on stage. They thought the song was too adult for its royalty audience.

Also, there were many radio stations around the world that banned “Santa Baby” from airplay.

By the fall of 1954, RCA Victor Records made the decision to change up the lyrics and release a variety of different versions of “Santa Baby”. But through the years, “Santa Baby” continued to be a popular hit. The producers made sure the song met the approval of all radio stations across the United States. The lyrics were watered down. The song was approved by the Federal Communications Commission (FCC).

Springer liked the idea and he also agreed not to take any royalties for the song. In a matter of weeks, when Madonna recorded “Santa Baby,” she sold over 250,000 copies and donated the proceeds to benefit the Special Olympics. Madonna helped revive “Santa Baby” while keeping the Christmas song on the holiday charts.

And as for Eartha Kitt, she went on to become one of the greatest female performers in the world. Born in South Carolina, the former Broadway star had a difficult childhood. She grew up into poverty on a plantation. Her mother, who was Black and Cherokee, abandoned her. Kitt was left to live with many relatives.

But despite her struggles, she managed to get herself through school as she became famous on the stage. Kitt became a renowned singer, dancer and actress in film, television and Broadway. She also became popular when she got cast in 1967 as Catwoman in ABC’s “Batman” television series. That’s where she developed her ‘sex kitten’ image that became her longtime signature until her death.

Always outspoken, Kitt also became infamous for verbally attacking then First Lady Lady Bird Johnson in 1968 at a Women’s Doers Luncheon being held at the White House. Towards the end of the luncheon, Kitt spoke directly to the First Lady and criticized her for allowing young boys and men to fight in Vietnam. Her comments so stunned Mrs. Johnson that the media reported she burst into tears.

Women in the room ran to the microphone to defend President Johnson and his wife. The Washington Post reported that President Johnson then had Kitt blacklisted in the United States. The incident almost ended Kitt’s acting career.

Unable to get jobs in the United States, Kitt was forced to perform in Europe until she returned to America in 1978. Kitt’s career was rejuvenated after she headlined in the Broadway musical “Timbuktu.”

During her fabulous career, Eartha Kitt earned two Tony nominations, a Grammy nomination and won three Daytime Emmys.   Kitt died on Christmas Day in 2008; the same holiday which was the backdrop for her hit song “Santa Baby” so many years before.