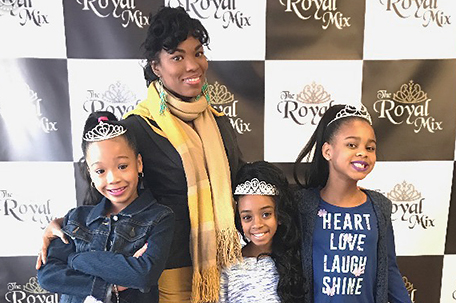 ABOVE PHOTO:  Shown in photo with writer Kharisma McIlwaine, is from left: Chy, Lady T, and Jaye of The Royal Mix.

In honor of March being Women’s History Month, the world is honoring women of all nationalities, professions, and ages. Among the women we should be celebrating are the young trio; Lady T, Chy, and Jaye better known as The Royal Mix. The young women of The Royal Mix are; Lady T, 10; Chy, 9; and Jaye, 9, are new to the music scene but are already on the path to longevity. These three young women are fearlessly following their dreams, and were eager to share what’s next on their journey to stardom.

The Royal Mix was conceived a little over a year ago from the mind of Vera Poitier, affectionately known to the girls as “Aunt Vera.” “I was just saying that I wanted a group of girls that could dance with high energy,” said Poitier. “I found  Jaye first, and she didn’t have to audition. Lady T came second, she did audition. Chy came third and was recommended by Lady T.” In just over a year, the girls are well on the path to  fulfilling the vision their Aunt Vera had for them.  “They are definitely entertainers! I wanted them to be good at everything, and they are but dancing is their strength,” said Poitier.

The girls, equally vocal about their personas, chimed in with both the inspiration behind the group as well as their goals for the future. Jaye and Chyna tag teamed their responses explaining how the name The Royal Mix was conceived. Jaye said, “we were inspired by The Little Mix, they’re a performance group also,” Chy added, “the reason we have royal is because we’re royal, and the reason we have mix is because we have different personalities and races.” Lady T added that her favorite  aspect of being in the group is that “I get to dance, rap, and sing with my SFFs (Sister Friends Forever).” When asked what they wanted their group to say to the world, they answered in unison, “We want to make you look, touch your hearts, and connect our smiles.” The girls plan on doing just that by working diligently to become excellent entertainers. They also offered a list of some of their biggest musical influences which include TLC, Beyoncé, Chris Brown, and Zendaya. Their newest single “It’s All About the Party Right” created by local producer Traydigga, is a fun party anthem that encourages all who listen to get on their feet and dance. They recently celebrated with an private party to celebrate the release of the music video. The Royal Mix currently has two singles but are working towards a third entitled “Keeping It Cute”. Stay tuned for more from this powerhouse trio, and in the meantime visit http://theroyalmix.com/ to stay up to date with The Royal Mix.

‘Arsenio’ is back! Bringing a mix of new and familiar in Fall return Sept. 9