The return of the signified monkey 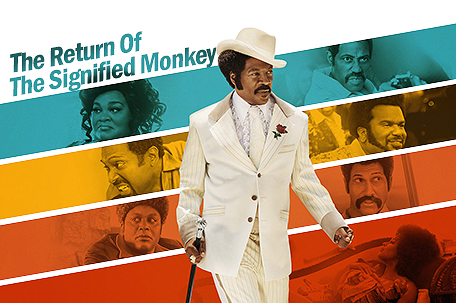 With his new movie “Dolemite Is My Name,” Eddie Murphy and a cast filled with really funny people give you not only an excuse to go to the movies, but a reason to renew your Netflix subscription.

Unless you’re a real film buff or someone who can remember when the president staring down the barrel of impeachment was a dude named Richard Nixon, you probably don’t remember the Blaxploitation era of filmmaking.

Because it was hard for Black actors to find roles in mainstream film productions that didn’t include slavery or housekeeping, many of these actors found themselves in films where the neighborhood pimp or drug dealer was the hero, helping community activists defeat “the Man,” who was usually a White guy.

(Unless it was a film like “Cleopatra Jones,” which featured Oscar-nominated actress Shelley Winters as Mommy, the drug queen pin. Then it was “the Woman.”)

Now some of these films, like “Cleopatra Jones,” “Shaft,” “Super Fly” and “Coffy” are considered classics and dealt with serious topics as seriously as you could in sky-high platform shoes. But others were classic because you could tell that the filmmaker was trying to make a film that didn’t make you have to think too hard.

The story of someone who was definitely in the second category, comedian Rudy Ray Moore, is the subject of the new movie “Dolemite Is My Name,” which is in theaters now and will be coming to Netflix on Oct. 25.

Eddie Murphy portrays Moore, who is trying to find his way in the world of entertainment. At first, he tries a straight comedy act, but after talking with some of the, well, elder statesmen of the streets and hearing their stories and rhymes, he takes his comedy to a bawdier place, creating Dolemite, who makes you laugh both with a combination of hilarious quips (I’m still trying to figure out what a ‘signifying monkey’ is) and bad kung-fu.

It’s been a while since Murphy has been this funny in human form. As the hapless comedian who goes on to be a comedy legend, he brings the kind of innocence you wouldn’t expect from a character looking to create content featuring bare breasts and kung-fu.

But while Murphy is the center of the movie, his supporting cast is hilarious as well. From Keegan-Michael Key, who plays Jerry Jones, the man who wrote the script for the first “Dolemite” film, to Mike Epps, Craig Robinson and Tituss Burgess, who play the  “ride or die” friends who help Moore make the first Dolemite record and work on the movie, the laughs kept coming.

But while Murphy was the center of the film, Da’Vine Joy Randolph, who plays Lady Reed, a woman Moore meets in a bar after she beat her cheating man to the ground, and Wesley Snipes, who portrays D’Urville Martin, the actor who winds up directing the “Dolemite” film because he had done bit parts in mainstream films like “Rosemary’s Baby,” chew up the scenery whenever they come on screen.

“Dolemite Is My Name” is a hilarious movie that not only gives you some insight into what content creation (and special effects, for that matter) looked like before it all went digital, but also what happens when someone uses the power of perseverance.

“Dolemite Is My Name” is a production of Netflix Studios. Now, if you want to see it on the big screen, it is playing at the Ritz at the Bourse, located at 400 Ranstead St., and at the Studio Movie Grill, on 69th Street. It moves to Netflix on Oct. 25.