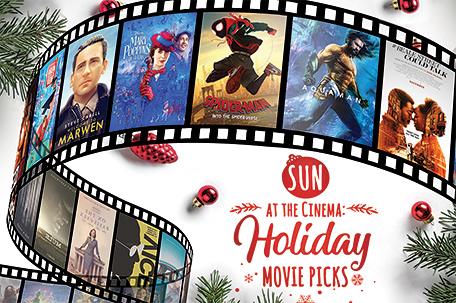 After the last nap has been taken and the last dish has been washed, here are some movies you can check out.

Sure, Christmas Day is going to be a day filled with family, friends, gifts and a whole lot of food.

But after you’ve opened those presents, eaten some dessert, and loaded that last dish into the dishwasher, now what? Sure, you could watch some television or even play some games, but why not go see a movie instead?

This year offers a variety of choices, some of which might even be Oscar contenders. From reboots (“Dr. Seuss’s The Grinch”, “Robin Hood”), to robots that are actually Volkswagen Beetles (“Bumblebee”), to children’s movies that will end up making parents hit the toy store (“Ralph Breaks The Internet”), there’s all kinds of things out there for you to check out once you’ve had that last glass of egg nog.

Here’s the ones I’m looking forward to seeing this holiday season:

As the SUN’s resident Comic Book Geek, I circled both of these movies on my calendar.

I saw the trailer for “Spider Verse” when I saw “Venom” a few weeks back and was really excited about the adventures of Miles Morales (Shameik Moore) as he battles the Kingpin with the help of a gang of other people with his abilities from various universes that wound up coming to his neck of the woods due to a wayward device.

As for “Aquaman”, this movie has the heavy task of saving the DC Cinematic Universe. As with one of the few things that anyone liked about “Justice League”( which is kind of unfair, because the movie itself wasn’t bad), Jason Momoa’s turn as the title character caused a certain amount of excitement about this film, something that its Rotten Tomatoes score kind of bears out.

Both films are in theaters now.

Through his Oscar-winning film “Moonlight”, director Barry Jenkins showed an ability to tell complex stories in a way that elicits heartfelt emotions. This time around, he takes on the James Baldwin novel “If Beale Street Could Talk”, which tells the story of a couple (Stephan Jones and KiKi Layne) whose love is challenged when one of them is wrongly accused of a crime and sent to jail.

Set in the Harlem of the early 70s, it tackles a lot of the same issues, such as police brutality and inequities in the justice system that communities of color face today. It might be a little dark for Christmas Day viewing, but you can’t go wrong with anything that has a James Baldwin novel as its source material.

Back in 2012, Christian Bale, or as I like to call him, the only human being that should have ever played Batman, hung up his Caped Crusader costume after “The Dark Knight Returns” was released.

In the new movie “Vice”, Bale portrays former Vice President Dick Cheney, a man that to many was the Dark Knight without a costume. Or the desire to do good. Or a soul.

With a cast that includes Amy Adams as Lynne Cheney, and Sam Rockwell doing the best George W. Bush imitation that I’ve ever seen from anyone, including producer Will Farrell, “Vice” interests me because the events connected to this movie are fairly recent. I wonder what will be put in…and what will be left out?

If the trailer is any indication, Cheney shooting his hunting partner in the face, an incident that showed just how gangsta the VP was, because gangsta is what you are when you can shoot someone in the face and get THEM to apologize to YOU, made the cut.

As the SUN goes to press, President Donald Trump has announced that he won’t sign the bill continuing to fund the government until February because it doesn’t include funding for his campaign promise of putting a concrete wall along the Mexican border to keep disease, drugs and, most importantly, Mexicans, from getting into the country.

In his new movie “The Mule”, Oscar-winning actor/director Clint Eastwood takes time from his busy schedule of talking to empty chairs at Republican political conventions to tell the story of a White guy who’s actually the embodiment of Trump’s worst nightmare.

Taking time off from hanging out in the Marvel Cinematic Universe, Laurence Fishburne, Michael Pena, and local dude Bradley Cooper co-star with Eastwood (who also directs) in telling the story of Earl Stone, a 90-year-old horticulturalist and Korean War vet who becomes the Sinaloa Cartel’s most prolific drug mule when facing foreclosure on his farm.

This is based on the New York Times article “The Sinaloa Cartel’s 90-year-old Drug Mule”, written by Sam Dolnick. While it appears to be sort of “Roseanne”-esque in its portrayal of the poor, downtrodden White man in search of sympathy after pushing just about everyone in his life away, and some of the reviews have included words like “racist”, “sexist” and “lacking nuance”, it also appears to be worth the time.

The Mule is in theaters now.

This winter appears to be the “Winter Of Comedic Actors Stretching Dramatic Muscles”. From Kevin Hart starring with Nicole Kidman and Bryan Cranston in “The Upside” to Andrew Dice Clay in “A Star Is Born”, folks seem to be saying “Hey! I can be more than just funny!”

Steve Carell, who has already starred in a couple of dramatic roles and has actually been pretty good in them, joins the list with “Welcome To Marwen”. “Marwen” tells the story of Mark Hogancamp, an illustrator who was attacked and beaten so badly that his memories, which include a marriage, are erased. In order to make peace with his world, he creates a world using action figures that makes the women in his life heroes and makes himself heroic, too.

The film, which is based on a true story, co-stars Janelle Monae, Leslie Mann, and Gwendoline Christie of “Game of Thrones” fame.

“Welcome To Marwen” is in theaters now.

Don’t get me wrong. I believe in recycling. Reimagining a glass or plastic bottle as a chair or a school book is a-ok with me.

But there are too many good and creative ideas out there for Hollywood to have to turn to recycling every chance it gets. Unless you’re turning something old, like say, the “Rocky” franchise, into something that looks at it from another angle entirely, there’s really no need to recycle old ideas.

Fortunately, “Mary Poppins Returns”, the reboot of “Mary Poppins” that stars Emily Blunt as the titular character and Lin-Manuel Miranda playing the role that made us all fall in love with Dick Van Dyke (who’s in this movie as well), puts just enough of a new twist on things to make it interesting.

Poppins returns to her charges in the Banks family as they’re about to be hit with a financial setback and have also forgotten how to have fun. So, of course, hilarity ensues.

This will probably work on some level with those young children not interested in “Spider Verse”, but it’ll also make those of us of a certain age remember the old days.

“On The Basis of Sex”, Focus Features

It’s Felicity Jones in the origin story of Supreme Court superhero Ruth Bader Ginsburg. What more do I need to say?

“On The Basis Of Sex” opens on Christmas Day.

Were you disappointed that you couldn’t take the kids to see “Deadpool 2” because it has the distinction of being a truly R-rated superhero movie?

Well, for reasons that kind of elude me, the folks at Marvel and Fox decided that a PG-13 version of the movie was necessary and that it had to come out just in time for Christmas viewing. My concern here is that most of the movie probably had to be cut in order to make this possible.

But hey, it features a scene with Fred Savage reprising his role as the little boy in “The Princess Bride”, so it can’t be all bad. A little creepy, maybe. But not all bad.

“Once Upon A Deadpool” is in theaters now.

So, that’s my list of movies that kinda interest me right now. I didn’t add “Widows” or “Creed II” because those are kind of obvious, and you’ve probably seen them already.

Have a great time at the movies!