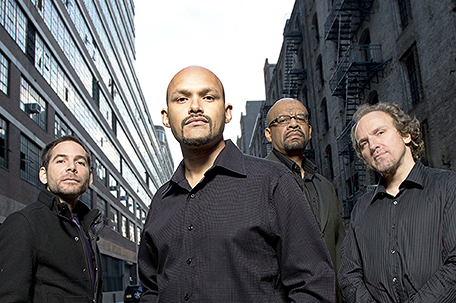 ABOVE PHOTO: The Miguel Zenon Quartet

Puerto Rican altoist Miguel Zenon and his Quartet will appear at the Philadelphia Clef Club of Jazz & Performing Arts on Saturday, May 12 at 7:30 PM. This will be the final concert of the 2017-2018 “Preservation Jazz Series.” Performing with Zenon will be his longtime group, which includes Venezuelan pianist Luis Perdomo, bassist Hans Glawischnig, and drummer Henry Cole.

In a long and storied career, Miguel Zenon has gained renown as a performer and composer who has been able to combine the discipline and innovation of the modern jazz idiom with the high-energy music and rhythms of his native Puerto Rico. His musical explorations and accomplishments have garnered Zenon both The MacArthur Fellowship and the Guggenheim Fellowship.

Born and raised in Puerto Rico, Zenon developed an interest in jazz growing up on the island.  He came to the states to study music at Berklee and Manhattan School of Music.

After graduating, Zenon entered the NYC jazz scene, where he played with the likes of Charlie Haden, David Sanchez, Danilo Perez, The Mingus Big Band, and Jerry Gonzalez and The Fort Apache Band.

Zenon’s recordings  have brought him wide recognition in the jazz community.

As a leader, and composer, he has delved into the ancestral music of his home island, drawing upon the traditional African-based musics of bomba and plena, and paying homage to the historic composers of Puerto Rico.

“Tipico” (2017) is Zenon’s most recent recording.  It features his band members Luis Perdomo, Hans Glawischnig, and Henry Cole, who have been together for over 15 years.

The Miguel Zenon Quartet will perform at the Philadelphia Clef Club of Jazz & Performing Arts, located at 736-38 South Broad St. in Philadelphia. Tickets are $35.00 and $25.00 for students.  Tickets may be purchased online at clefclubofjazz.org, or by phone. For more information, call (215) 893-9912.

The Miguel Zenon concert is part of the “Preservation Jazz Series,” which is sponsored with a grant from the National Endowment for the Arts and the Wyncote Foundation.