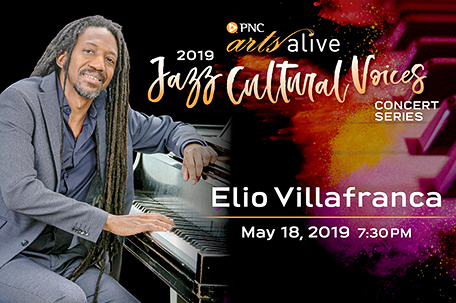 The Philadelphia Clef Club of Jazz will present Grammy-nominated Afro-Cuban jazz pianist Elio Villafranca as part of the PNC Arts Alive “Jazz Cultural Voices” series on Saturday, May 18, at 7:30pm. Performing with Villafranca will be noted altoist Vincent Herring, bassist Peter Slavov, and drummer Charles Gold. Tickets are available for $20.00. For information, please call (215) 893-9912, or access the Philadelphia Clef Club website at www.clefclubofjazz.org.

Ever since Villafranca arrived from Cuba in 1995, he has become known as one of the most creative and visionary artists in the Afro-Cuban jazz idiom. After initially settling in Philadelphia as a professor at University of the Arts, Villafranca moved to New York, where his virtuosity and dynamism on the keyboard placed him at the forefront of the latest generation of remarkable pianists, composers and bandleaders. His first recording — “Encantciones” which featured Philadelphia musicians Pat Martino and Terrell Stafford — was ranked amongst the 50 best jazz albums of the year by JazzTimes magazine.

Villafranca gained the attention of none other than Wynton Marsalis, who got him a commission to make a live recording, “Caribbean Tinge” (Motema), which gained widespread critical acclaim, as well as garnering several European awards. He also received several Grammy nominations in the “Best Latin Jazz Album of the Year” category, most recently for the groundbreaking 2018 release “Cinque,” a musical exploration of Congolese influences in Cuban and American music.  Villafranca is making his debut at the Philadelphia club, so his performance will be a musical event.

“Through PNC Arts Alive, we continue to help invigorate local arts organizations while bringing new and exciting programs to our community,” Joe Meterchick, PNC regional president for Philadelphia, Delaware and Southern New Jersey, said.  “The creativity and collaboration demonstrated by the local arts community is evident in the programs that will be introduced, while enabling new visitors and residents alike to experience a diverse range of exhibits and performances.