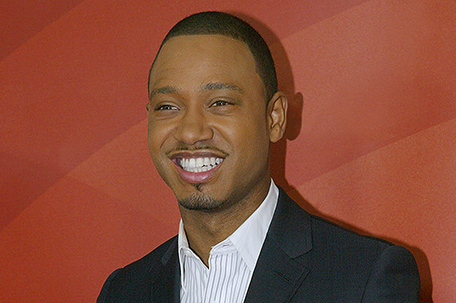 Terrence Jenkins, aka Terrence J, was born in Queens, New York  and raised in Raleigh and Rocky Mount, North Carolina. He earned a Bachelor’s of Science degree in Broadcast Journalism at North Carolina A&T University where he also worked as a DJ and served as Student Body President.

In 2006, Jenkins launched his television career as host of BET’s “106 & Park.” That same year, he made his movie debut alongside Zoe Saldana and Wood Harris in The Heart Specialist . He parlayed that success into roles in Stomp the Yard 2, Think Like a Man and Sparkle, to name a few. And just last year, he played himself in the big screen version of Entourage.

Jenkins has blossomed into a charismatic actor, philanthropist and author who is now one of the most recognizable faces in Hollywood, most recently, as the co-anchor of the news program “E! News.” The three-time Emmy Award-nominee also spent seven years hosting BET’s “106 & Park,” the longest-running music countdown show in television history.

Jenkins published his first literary work, “The Wealth of My Mother’s Wisdom,” in 2014, and he’s also a model and spokesperson for several brands, including ad campaigns for Jeep Wrangler, Crown Royal Black Whiskey, Sean John and Snapple. He’s appeared in GQ magazine four times in the past couple years, too.

Away from work, Jenkins is heavily invested in numerous philanthropic endeavors. For instance, he served as a Centennial Ambassador in the National Park Service’s 100th anniversary “Find Your Park” campaign. 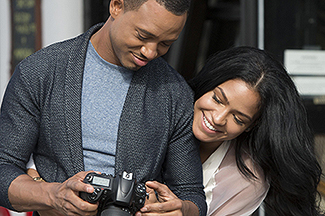 Terrence J and Cassie Ventura in a scene from The Perfect Match.

Here, he talks about his latest outing opposite Cassie Ventura in The Perfect Match, a romantic comedy revolving around a shameless player who takes a dare to remain faithful to one woman for an entire month.

Kam Williams: Hey Terrence, thanks for the time.

Terrence J: Thank you so much, Kam.

KW: What interested you in the script for The Perfect Match?

TJ: I don’t think it was called The Perfect Match at the time, but it had some really amazing characters. And I’d been working with Queen Latifah and Flavor Unit [her production company] for quite some time. When we were able to develop it into a great story with dynamic characters, it became a no-brainer and a project I really wanted to be a part of.

KW: Who put together such a talented cast with people like like Paula Patton, Lauren London, Cassie Ventura, Kali Hawk, Brandy Norwood and Donald Faison? And even that scene stealer Beau Casper Smart was terrific in a minor role.

TJ: Yeah, Casper was great! It was definitely a collaborative effort. Billie [director Billie Woodruff] made some decisions. Queen Latifah’s team made some decisions. I had my hand in it, and we had great casting directors [Kimberly Hardin and Natasha Ward]. We all came together.

KW: How did you prepare to play Charlie?

TJ: I really wanted to nail this character, so I worked with an acting coach. I was heavily inspired by Eddie Murphy in Boomerang and a lot of my favorite movies growing up. Charlie’s a multi-layered character, and I devoted a lot of time to working on him so that I felt like I knew him by the time we shot.

KW: Although this movie is unique in its own right, it did remind me of a couple films, Love Jones and The Best Man. I’d rank it right up there with those urban classics,

TJ: Thank you so much!

KW: What message do you think people will take away from The Perfect Match?

TJ: This is a coming-of-age story about growing up. A lot of times, guys think we can get away with things. In the case of Charlie, he meets his match, a girl who really helps him mature and to look at relationships, his career and other aspects of his life in a new way. That’s what I hope people take away from the film.

TJ: Not really one in particular. I love any script that tells a good story.

TJ: They couldn’t be more different from each other. I’ve really learned to compartmentalize the different parts of my life. I work really hard. Today, I was up at 6 am and, from the moment I woke up, it’s been go-go-go, from shooting a show in the morning to doing press in the afternoon. That calls for a lot of balance. So, I definitely need to know when to turn it off and just take some time for myself to relax. I’ve gotten very good about scheduling time for myself when I don’t have to be “on.”

TJ: Wow! I’ve never been asked that question before. Let me think… Riding on the train with my mom.

TJ: Selling shoes at a Foot Locker in the mall. And that’s how I met the guy from the radio station in Rocky Mount, North Carolina who gave me my first internship.  I sold him a pair of sneakers. I fell in love with radio once I started working there, and I never stopped.

TJ: My ID and credit cards.

KW: Thanks again for the time, Terrence, and best of luck with the film. I really enjoyed it.

TJ: Thank you so, so much, Kam. I really appreciate your taking the time to watch it.

To see a trailer for The Perfect Match, visit: www.youtube.com/watch?v=vKCFkFaIwU0