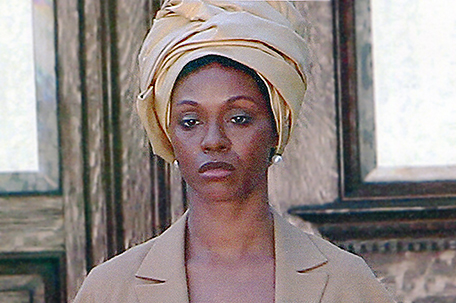 You remember that Nina Simone biopic that Zoe Saldana stars in? You know the one that had everyone all up in arms about Saldana casting, but about which we haven’t heard anything in at least a year?

Well, it looks like it’s finally going to see the light of day, or so Ben Latham-Jones of the UK’s Ealing Studios (the company behind the film) revealed in an interview with The Hollywood Reporter a week ago at Cannes. “Nina,” as the film is entitled, will be released by “eOne and Universal worldwide later this year.” He didn’t give a specific date, but at least we have a time range

I’ll be keeping my antennae up for a first trailer, which I’d expect will surface some time soon (assuming the “later this year” release holds).

Last year, the project was taken to the Cannes Film Market (Marche du Film), where it was screened for potential international distributors, and where eOne and Universal apparently picked up its rights.

However, one key person who wasn’t present for the Market was the director of the film, Cynthia Mort, who was reportedly none-too-pleased with developments regarding the production of the film, leading to her take legal action, something that  may have held up the film’s release. The film was completed 2 years ago.

Mort filed a lawsuit last year against Ealing Studios, claiming that the company effectively cut her out of the decision making process during production, and, as a result, she was not at all happy with the version of the film that was to be screened for distributors.

According to the lawsuit, Mort had rights over the developing picture and “got approval over the final shooting script, the cast and crew, the line producer, the designer and all department head as well as consulting rights on advertising, distribution, shooting schedule and budget.”

However, the suit continues, “throughout the course of the film’s production and post-production, defendants consistently acted to frustrate Mort’s involvement in the film, thereby breaching the Director Agreement. These breaches by the Defendants include, but are not limited to: taking complete control of editing the Film in June 2013 and failing to consult with Mort about subsequent cuts and changes; abandoning Mort’s previous cuts of the Film; failing to disclose the Film’s financials, finishing budget, and financing deals; and failing to keep Mort informed of other crucial creative and budgetary developments and decisions throughout production and post-production of the Film.”

Apparently the film was supposed to have been released prior to the lawsuit (so we’re talking late 2013, early 2014), which obviously didn’t happen.

Mort was seeking monetary damages (the amount wasn’t made public), as well as “a declaration that the defendants can’t make decisions without her meaningful approval and consultation.”

In development for at least six years, Mary J. Blige was initially attached to star in the film, but she was eventually replaced by Saldana, who brought more international box office gravitas to the production.

The one constant actor throughout the ordeal was David Oyelowo, cast from the beginning to play Simone’s Paris-based manager Clifton Henderson.

There still aren’t official images from the film, so the above image is one of several on-set photos circulated online two years ago.

It’s worth noting that Simone’s daughter,  Lisa Simone Kelly, previously publicly expressed strong disapproval of the project, which doesn’t have the Simone estate’s authorization and or cooperation.

In response, Netflix and RadicalMedia paired up to produce and release the documentary, What Happened, Miss Simone?, directed by Academy Award nominated filmmaker Liz Garbus (The Farm: Angola, USA and Bobby Fischer Against the World), which will premiere exclusively in all territories where Netflix is available, on June 26.

The documentary was made in cooperation with the estate of Nina Simone, and is described as an “epic” documentary that interweaves never-before-heard recordings and rare archival footage together, with Nina’s most memorable songs, incorporating never-before-heard audio tapes recorded over the course of three decades, of Nina, telling her life story to various interviewers and would-be biographers. Rare concert footage and archival interviews, along with diaries, letters, interviews with  Simone Kelly, friends, collaborators, and other exclusive materials, make this the most authentic and personal telling of the extraordinary life of one of the 20th Century’s greatest recording artists.

On movies, bold action and why Zoe Saldana shouldn’t play Nina Simone or How I learned to appreciate the lesson of T.D. Jakes even if I’m not a big fan