The new Netflix romantic drama ‘Malcolm & Marie’: Can this relationship be saved? Or should it? 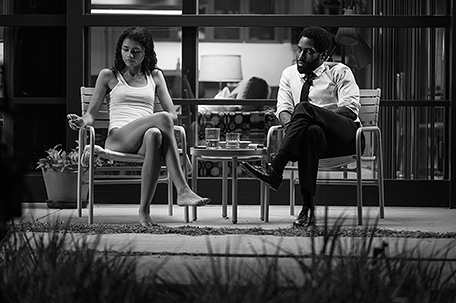 ABOVE PHOTO: John David Washington as Malcolm, Zendaya as Marie in a scene from Malcolm & Marie”.  (Dominic Miller/Netflix © 2021)

The trending topic on all of social media since its February 5 release has been Netflix’s “Malcolm and Marie.” Written and directed by Sam Levinson (Euphoria), the film features two brilliant actors — John David Washington and Zendaya — as couple Malcolm Elliot and Marie Jones. Washington and Zendaya also serve as co-producers on the project along with Kevin Turen, Ashley Levinson and Sam Levinson.

“Malcolm & Marie,” which was the first feature film in Hollywood to be written, financed, produced and filmed entirely during the COVID-19 pandemic, is a cinematic masterpiece shot in black and white.

The film — which focuses on the night of Malcolm’s movie premiere and the turbulent aftermath that immediately follows — begins with Malcolm still reveling in the accolades he received during his big night. Visibly vexed, Marie — still draped in a gorgeous gown — goes out to the patio to smoke. Malcolm remains oblivious to her brewing emotions on the brink of eruption. Tension continues to build as Marie returns inside to make Malcolm a box of Kraft Macaroni and Cheese, asking him, “Do you want salted or unsalted butter?” as a response to his declaration, “I love you, Marie.”

That love presents a diorama of intensity, passion and conflict. Like watering a flower with acid, the erosion of their love is inevitable. The complex emotional rollercoaster ride that is their relationship, reveals just how broken the foundation of their love truly is.

Once Malcolm finally realizes that Marie is upset with him, she attempts to squelch the pending argument stating, “…nothing productive is going to be said tonight.” Her attempt fails. At this point, the audience is introduced to the dysfunction of Malcolm and Marie’s relationship. It quickly becomes clear that fighting is something that they do often. In many ways they are fueled by it. This first argument of many to come is a valid one.

In Malcolm’s excitement during his speech, he forgot to thank one very important person… Marie. That fact is vital not only because she is his better half and partner, but also because the film he created was based on her life — a life of hardship for a recovering addict. The argument continues to escalate, and the crux of the story is revealed.

This relationship is steeped in chaos — on every single level. This couple lacks the emotional intelligence to know when it’s necessary, even in conflict, to wave the white flag. Instead, their relationship dissolves into a battle of pain where the goal becomes winning at the cost of their individual and collective destruction.

In relationships, there will always be disagreements and arguments. Often, the longer a couple is together the more arguments they have; sometimes for nothing or for a culmination of everything. The arguments between Malcolm and Marie however differ from those in any healthy relationship in one major way — they harm one another intentionally. The venom which resides at the heart of so much of their dialogue centers around the fact that Malcolm and Marie have completely different perspectives on how they see their relationship.

Malcolm questions Marie’s timing and reason for being upset, “Why is it that anytime anything good happens in our lives you have to find something, anything, the most minor detail to harp on, to make ugly to ensure there’s no reason to celebrate?”, he asks. Marie doesn’t answer this question until later, but not in the way that Malcolm expects. She later explains to him, “You spend your entire life catering to the feelings and the whims of literally everyone but me.”

Marie wants something that Malcolm refuses to do — acknowledge her. They speak in two distinctly different languages. Marie wants a thank you, Malcolm gives her defensive retorts and tells her he loves her instead, but it’s not the same.

The most alarming aspect of “Malcolm & Marie’’ is the callousness in which they speak to one another. They say things to intentionally hurt and devalue one another as sport. They speak to each other more like enemies than lovers for the majority of the film, crossing lines that can never be uncrossed. Once spoken, words can’t be unsaid and the resulting damage can’t be undone.

Yes, their conversations are brutally honest, but the brutality of that honesty is difficult to witness. The reckless abandonment in which they craft new ways to break each other down with words carefully constructed to destroy is terrifying. They attack one another, they stop, they forget their anger momentarily, there are brief glimmers of intimacy and love… and then the attacks return in a vicious never-ending cycle.

Malcolm is a narcissist, addicted to harming the woman he loves and then trying to repair her with adoration and affection. Marie is broken, but not innocent from offenses. The harm she inflicts on Malcolm is often a response to his abuse . With both parties, the desire to win supersedes the desire to protect the sanctity of their love.

Malcolm and Marie’s relationship has no clear boundaries. Malcolm follows Marie into the bathtub and interrupts her bath time, a sacred time for many women, to unload all of his fury on the love of his life while she soaks naked and vulnerable. He informs her that he could “break her like a twig” — which begs the question why would you want to? Why would you want to break the person you claim to love; the person you should want to build up?

Malcolm and Marie’s relationship is an imploding bomb of codependency and the comfort they’ve found in the consistency of their routine. You know these two are headed for disaster, but you can’t look away, so instead you peak through your fingers.

In a film with only two characters, there is an unspoken weight that the actors must carry to make a film that happens in one location, in a few rooms worth watching – and they easily succeed. Both Washington and Zendaya offer riveting performances that will surprise audiences. The “break up to make up” sequences are exhausting in the best possible way. The audience will feel like they are in the fire with Malcolm and Marie.

Zendaya, in one scene in particular, is so convincing it’s scary — mouths will drop. Washington is equally brilliant and the range of emotion in the monologues alone are incredibly impressive. A note to viewers: although this is a film that prominently features Black love, this is not a Black love story that anyone should want to emulate. If any lesson is to be learned from this film, it should serve as a cautionary tale that love itself is not enough.

Some relationships are too damaged to repair, even after “thank you” and “I’m sorry” are finally uttered. “Malcolm and Marie” is available to stream on Netflix — it’s a must see!