The Men of Marvel 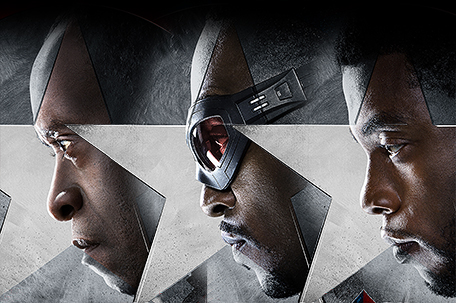 Look up in the sky, it’s a bird, it’s a plane, its black superheroes!

While the nation’s first Black president is on his way out, Black superheroes are coming into the Marvel office. 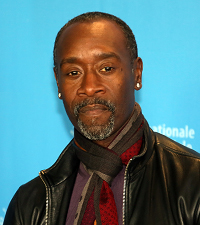 Not one, not two, but three black superheroes on the frontlines of ‘Captain America: Civil War’ made this film a force to be reckoned with on the big screen. Don Cheadle as War Machine, Anthony Mackie as Falcon and Chadwick Boseman as Black Panther, a newcomer to the Marvel Cinematic Universe, owned their roles and executed them flawlessly.

While the movie is in full color, the superheroes were definitely in black and white. Directors Joe Russo and Anthony Russo did a phenomenal job directing such a diverse cast. Captain America: Civil War is still setting records at box offices across the country and doesn’t seem to be slowing down any time soon. I guess we won’t see this action packed film on DVD or On-Demand for quite some time. Brilliant performances by three brilliant actors have set the tone for black actors and Marvel fans all over the world. But then again, why would we expect anything less from the Men of Marvel.

All trailers for ‘Captain America: Civil War’ lead us to believe “Lt. James Rhodes” aka “War Machine” was shot down leaving fans heartbroken over the possibility of “Rhodey” being gone forever. Fans have come to love Rhodey since Cheadle replaced Terrence Howard in ‘Iron Man 2’ and the thought of killing him off was unthinkable. But before these rumors became our reality, fans raced to sold-out theaters just to see if “Rhodey” would live or dies the actors are just as excited to see the outcome of their characters’ fate as the fans. 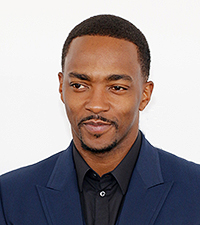 “Once you become a part of the Marvel franchise and run into Iron Man, you are completely changed” says Anthony Mackie aka “Falcon.” Mackie, the real hype-man for the Marvel series, makes it known that Captain America: Civil War is Oscar worthy, calling it the best superhero movie ever made. He goes on to say, “I think it might be the first superhero movie that might be up for Best Picture.” Is he speaking this into existence? We’ll have to wait and see. So far, the only Oscar given to a superhero movie was given to Heath Ledger for Best Supporting Actor as “The Joker” in The Dark Knight.’

While Marvel movies are platinum on the big screen and at the box office, the Academy has yet to acknowledge the phenomenon. Mackie has cemented his place in the Marvel Cinematic Universe as Falcon and if he is betting on the Oscar nod, then my guess is he’s in it for the long haul.

From portraying Jackie Robinson in 42 to James Brown in Get On Up to “Black Panther” in Captain America: Civil War, Chadwick Boseman is saying it loud; I’m Black and I’m proud! 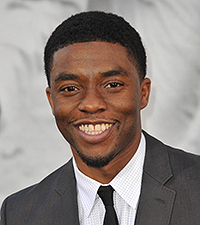 New to the Marvel franchise, Boseman said “It was helpful to be welcomed into the fold. Walking onto the set where these guys have been working together for years was not intimidating, it was reassuring.” Aside from his own plans and distinctive costume, Boseman says “Black Panther doesn’t even look at himself as a superhero. He sees himself as a ruler and politician first.” Black Panther, who is considered to be the comics’ first Black superhero, is slated to hit the big screen in 2018 with Michael B. Jordan and possibly Lupita Nyong’o co-starring with Boseman. When you put some of Hollywood’s most talented black actors in a movie together about Marvel’s most prominent black superhero you are almost guaranteed a cinematic slam dunk.

In no particular order, War Machine, Falcon and Black Panther aka The Men of Marvel have become our favorite superheroes.

However, given the critical feedback superhero franchises have received for featuring mostly white males, Captain America: Civil War seems like an apology; and we accept. They got the message and it shows in this film. It’s us as people in Hollywood catching up to the images people want to see” says executive producer, Nate Moore. While Hollywood has disappointed us in the past with superhero films starring black characters, the demand for diversity in superhero films is still relevant and puts the pressure on Hollywood execs to deliver groundbreaking characters in projects like the Black Panther film.

It can be said that Captain America is the greatest trilogy of all times and adding three black superheroes to the mix was like adding sugar to your iced tea. You don’t really need it but it makes it taste so much better. If you haven’t seen this film, go check it out because it looks like 2016 could be the year of the Black Superhero thanks to the Men of Marvel.