The Man in 3B–suspects abound in inner-city whodunit 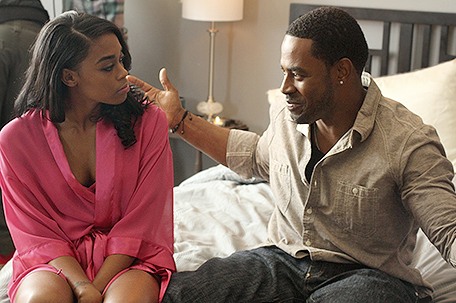 ABOVE PHOTO:  Lamman Rucker stars as the handsome but troublesome Darryl Graham in the new crime drama/mystery ‘The Man in 3B’.

It doesn’t take long for Darryl Graham (Lamman Rucker) to start rubbing people the wrong way after he returns to his ‘hood in a rough section of South Jamaica, Queens. First, a miserably-married neighbor in his apartment building falls in love with him at first sight.

Trouble is, Connie’s (Brely Evans) hypocritical husband is very possessive despite the fact that he’s cheating on her. So, Avery (Anthony Montgomery) exhibits a jealous streak as soon as he catches wind of his wife’s keeping time with Darryl and crying on the brother’s broad shoulders.

Another tenant who develops a crush on the handsome hunk is Benny (Robert Ri’chard). However, he’s deep in the closet and only propositions Darryl after mistaking him as gay. After being rejected, Benny feels so humiliated and worried about being outed, that he’s overheard issuing a death threat by nosy Ms.Mamie (Marla Gibbs), an elderly eavesdropper who lives in 3A.

Meanwhile, Darryl’s being back in town has his ex Krystal (Nafessa Williams) thinking about getting back together, although she’s already in a committed relationship. And Daryl makes enemies with some rough dudes on the street after coming to the aid of Benny.

All of the above means that the detectives assigned to the case (Kellita Smith and D.B. Woodside) have a lot of suspects to interrogate when Darryl perishes in a fire that guts his new flat. The ensuing search for the arsonist responsible is the puzzle at the heart of The Man In 3B, an inner-city whodunit directed by Trey Haley (Perfect Combinatio ).

The movie is based on a best seller by Carl Weber, who adapted the novel to the screen himself. Unfortunately, in an apparent attempt to remain faithful to the source material, the production is cluttered with too many characters to fully develop. As a result, the picture feels like an overplotted soap opera, since most of the players are simplistically-drawn archetypes with little to do besides establishing their motives for murder.

On the positive side, Haley has recruited an impressive cast which includes everyone from the legendary heartthrob Billy Dee Williams to the much beloved Marla Gibbs, best remembered as Florence, the sassy maid on “The Jeffersons”.  Another plus is that the cleverly concealed solution to the crime is definitely difficult for the audience to figure out.

A multi-layered mystery where just about everybody but the butler proves to be a prime suspect.

Rated R for profanity and sexuality

To see a trailer for The Man In 3B, visit: https://www.youtube.com/watch?v=EB1V8IGk2sA