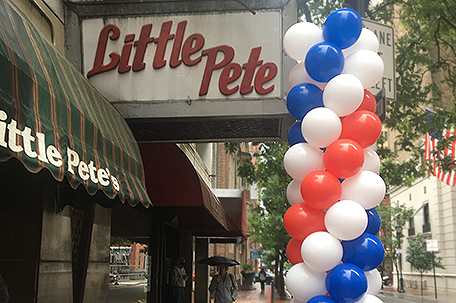 Despite a steady drizzle falling from the sky, the line of people waiting for a last meal at Little Pete’s diner stretched down South 17th Street.

Owners John and Pete Koutroubas threw a block party to thank their longtime customers for 39 years of success on Tuesday. The restaurant closed its doors for good on Memorial Day.

With a menu that included several classic Greek dishes including pork and chicken souvlaki, spanakopita (spinach pie), and Greek salad, longtime fans of the 24-hour diner in Center City came to say goodbye to an institution that became part of their lives.

“I’m in mourning,” one woman said.

“I’m here because I wanted to say my goodbyes,” another woman said. “I’ll miss the Caesar salad with ranch dressing.” 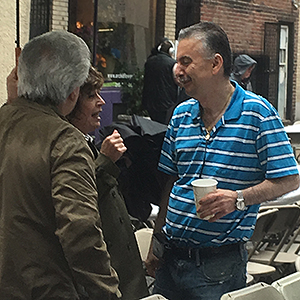 While the branch at 24th and Fairmount will remain open, the closing of the South 17th branch represents the end of an era, said John Koutroubas, Little Pete’s co-owner.

It was the Last Diner Standing in Center City.

“We really accomplished a lot to stay open for 39 years,” Koutroubas said. “We did everything for the customer. Even if we did open another place, it wouldn’t be the same.”

The restaurant was closed to make room for a 13-story, 309-room Hyatt Centric hotel.

A steady stream of customers braved the rain to come to the block party. Many of them hugged John Koutroubas, took selfies with him, and took pictures of a place that held many memories for them.

While he plans on spending some time at the 24th and Fairmount location so his brother Pete can get some much-needed time off, John Koutroubas also plans on getting some rest of his own.

And while he knows he won’t be able to duplicate the magic that was Little Pete’s on South 17th, he hasn’t given up on another diner in the center of town.

Munchies: After The After Party