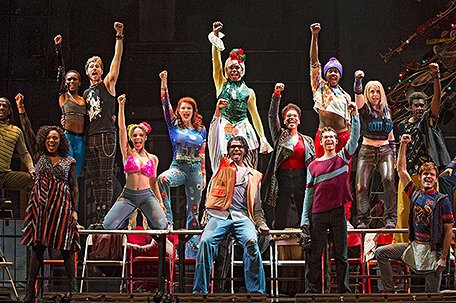 The Kimmel Center for the Performing Arts and The Shubert Organization announce the 2019/20 Broadway Philadelphia season, featuring a brilliant lineup of Tony Award-winning productions and the latest Broadway blockbusters. The upcoming season boasts 14 illustrious productions with a combined 44 Tony Awards and 28 Drama Desk Awards. This season also introduces nine sensational national touring shows making their Philadelphia premieres. Broadway Philadelphia subscribers will receive priority access to the best seats for the 2019/20 season, as well as an array of delightful subscriber perks and exclusive event invitations throughout the year. Season ticket packages for the 2019/20 season are now on sale.

The 2019/20 season will bring the best of touring Broadway to the heart of the City of Brotherly Love, featuring the latest Tony Award-winning productions, as well as returning beloved Broadway classics. A monumental slate of nine  productions will be making their Philadelphia premieres, including: “Come From Away”;” Mean Girls”; “The SpongeBob Musical”; “The Band’s Visit”; “Hello, Dolly!”; “Dear Evan Hansen”; “Escape to Margaritaville”; “Cirque Dreams: Holidaze”; and “Summer: The Donna Summer Musical.”  Broadway Philadelphia is presented collaboratively by the Kimmel Center for the Performing Arts and The Shubert Organization, with productions at the Academy of Music, Forrest Theatre, and the Merriam Theater.

“We are thrilled to announce this exceptional lineup which brings the best of touring Broadway to our Cultural Campus for the 2019/20 Season,” said Anne Ewers, president and CEO of the Kimmel Center for the Performing Arts. “Offering one of the most diverse seasons we’ve ever showcased, these productions will appeal to new and lifelong theater fans alike – harmoniously mixing classic Broadway with the latest hit shows to give Philadelphians the culturally rich entertainment they crave year-round!”

“Each year, the Kimmel Center for the Performing Arts’ partnership with The Shubert Organization offers the City of Philadelphia a theater experience like no other with our Broadway Philadelphia offerings,” said Philip J. Smith, chairman of The Shubert Organization, Inc. “We are pleased to continue our partnership this upcoming season with critically-acclaimed productions and exciting premieres.”

“Our 2017/18 “Hamilton” announcement brought a mammoth 228 percent  jump in new audiences!” said Crystal Brewe, senior vice president of strategic marketing and communications. “We continue to engage these new audiences with a fantastic subscriber experience, perks, and the sense of community we have built – this is good for arts in Philadelphia and great for the Broadway ecosystem.”

Subscribers save single ticket prices and are offered a variety of exclusive privileges, including the first opportunity to select the best seats in the house and the option to renew their seats each year. Subscribers also enjoy a host of benefits, including waiving of exchange fees, priority ticket access, payment plan options, exclusive experiences, and more.

Seven-show packages are available now and include Tuesday through Sunday performances of “Come From Away”, “Mean Girls”, “The SpongeBob Musical”, “The Band’s Visit”’ “Hello, Dolly!”, “Dear Evan Hansen”’ and “Escape to Margaritaville.” Mid-week matinee performances are NEW for the 2019-20 season.

Single tickets for individual productions will go on sale at a later date.

In 1996, an original rock musical by a little-known composer opened on Broadway and forever changed the landscape of American theatre. Two decades later, Jonathan Larson’s “RENT” continues to speak loudly and defiantly to audiences across generations and all over the world. And now, this Pulitzer Prize and Tony Award®-winning masterpiece returns to the stage in a vibrant 20th anniversary touring production.

Broadway’s “Come From Away” is a Best Musical winner all across North America! This New York Times Critics’ Pick takes you into the heart of the remarkable true story of 7,000 stranded passengers and the small town in Newfoundland that welcomed them. Cultures clashed and nerves ran high, but uneasiness turned into trust, music soared into the night, and gratitude grew into enduring friendships. Don’t miss this breathtaking new musical written by Tony® nominees Irene Sankoff and David Hein, and helmed by this year’s Tony-winning Best Director, Christopher Ashley. Newsweek cheers, “It takes you to a place you never want to leave!” On 9/11, the world stopped. On 9/12, their stories moved us all.

Direct from Broadway, “MEAN GIRLS” is the hilarious hit musical from an award-winning creative team, including book writer TINA FEY (“30 Rock”), composer JEFF RICHMOND (“Unbreakable Kimmy Schmidt”), lyricist NELL BENJAMIN (“Legally Blonde”) and director CASEY NICHOLAW (“The Book of Mormon”). Cady Heron may have grown up on an African savanna, but nothing prepared her for the vicious ways of her strange new home: suburban Illinois. Soon, this naïve newbie falls prey to a trio of lionized frenemies led by the charming but ruthless Regina George. But when Cady devises a plan to end Regina’s reign, she learns the hard way that you can’t cross a Queen Bee without getting stung. New York Magazine cheers, ““MEAN GIRLS”delivers with immense energy, a wicked sense of humor and joyful inside-jokery.”

A legendary roster of Grammy® Award winners. A visionary director and a Tony Award®-winning design team. One of the world’s most beloved characters. Turn them loose on stage and what do you get? The musical The New York Times declares, “BRILLIANT!” Broadway’s best creative minds reimagine and bring to life the beloved Nickelodeon series with humor, heart and pure theatricality in “a party for the eyes and ears” (Daily Beast).

“Cirque Dreams :Holidaze” lights up the 2019 holiday season with its popular and electrifying stage spectacular The New York Daily News proclaims it, “a delicious confection of charm, sparkle and talent by the sleigh load and so full of energy it could end our dependence on oil.. “Cirque Dreams: Holidaze” features the most unique cast of incomparable cirque artists and theatrical talent that leaves audiences spellbound. Over 300 imaginative costumes, 20 world-class astonishing acts, the finest singers, original music and seasonal favorites celebrate Thanksgiving, Chanukah, Christmas and New Year’s in a 2-hour breathtaking spectacle. Audiences of all ages will marvel at soaring acrobatics, gravity defying feats and extravagant theatrical production numbers.

“The Band’s Visit” is the winner of 10 Tony Awards, including Best Musical, making it one of the most Tony-winning musicals in history. And now it’s also a Grammy Award® winner for Best Musical Theater Album. In this joyously offbeat story, set in a town that’s way off the beaten path, a band of musicians arrive lost, out of the blue. Under the spell of the desert sky, and with beautiful music perfuming the air, the band brings the town to life in unexpected and tantalizing ways. Even the briefest visit can stay with you forever. With a Tony-and Grammy-winning score that seduces your soul and sweeps you off your feet, and featuring thrillingly talented onstage musicians, “The Band’s Visit” rejoices in the way music makes us laugh, makes us cry, and ultimately, brings us together.

“Riverdance”, as you’ve never seen or heard it before! A powerful and stirring re-invention of this beloved favorite, celebrated the world-over for its Grammy award-winning score and the excitement, energy and dynamism of its Irish and International Dance. Twenty-five years on, renowned composer Bill Whelan brings this mesmerizing soundtrack back to life, completely revitalized for the first time since those original orchestral recordings. Fall in love with the magic of “Riverdance” all over again.

Cameron Mackintosh presents the new production of Alain Boublil and Claude-Michel Schönberg’s Tony Award-winning musical phenomenon “Les Misérables” direct from its acclaimed Broadway return. Featuring the beloved songs “I Dreamed A Dream,” “On My Own,” “Stars,” “Bring Him Home,” “One Day More,” and many more, this epic and uplifting story has become one of the most celebrated musicals in theatrical history. With its glorious new staging and dazzlingly reimagined scenery inspired by the paintings of Victor Hugo, this breathtaking new production has left both audiences and critics awestruck. “Les Miz is born again!” (NY1).

An album that inspired a REVOLUTION. A REVELATION that changed the world. A REINVENTION for this millennium. “Jesus Christ Superstar” is an iconic musical phenomenon with a world-wide fan base. In celebration of its 50th Anniversary, a new mesmerizing production comes to North America. With music and lyrics by Emmy, Grammy, Oscar and Tony winners Andrew Lloyd Webber and Tim Rice, Jesus Christ Superstar is set against the backdrop of an extraordinary series of events during the final weeks in the life of Jesus Christ as seen through the eyes of Judas. Reflecting the rock roots that defined a generation, the legendary score includes ͚”I Don’t Know How to Love Him,” “Gethsemane” and “Superstar.”

A letter that was never meant to be seen, a lie that was never meant to be told, a life he never dreamed he could have. Evan Hansen is about to get the one thing he’s always wanted: a chance to finally fit in. “Dear Evan Hansen” is the deeply personal and profoundly contemporary musical about life and the way we live it. It has struck a remarkable chord with audiences and critics everywhere, including The Washington Post, who says “Dear Evan Hansen” is “one of the most remarkable shows in musical theatre history.”

Meet Jenna, a waitress and expert pie-maker who dreams of a way out of her small town and rocky marriage. Pouring her heart into her pies, she crafts desserts that mirror her topsy-turvy life such as “The Key (Lime) to Happiness Pie” and “Betrayed By My Eggs Pie.” When a baking contest in a nearby county — and a satisfying run-in with someone new — show Jenna a chance at a fresh start, she must find the courage to seize it. Change is on the menu, as long as Jenna can write her own perfectly personal recipe for happiness. Brought to life by a groundbreaking, all-female creative team, this Tony Award®-nominated hit features original music and lyrics by 7-time Grammy® nominee Sara Bareilles (“Love Song,” “Brave”), a book by acclaimed screenwriter Jessie Nelson (“I Am Sam”) and original direction by Tony Award winner Diane Paulus (“Pippin”, “Finding Neverland”).

She was a girl from Boston with a voice from heaven, who shot through the stars from gospel choir to dance floor diva. But what the world didn’t know was how Donna Summer risked it all to break through barriers, becoming the icon of an era and the inspiration for every music diva who followed.  With a score featuring more than 20 of Summer’s classic hits including “Love to Love You Baby,” “Bad Girls,” and “Hot Stuff,” this electric experience is a moving tribute to the voice of a generation.

Welcome to Margaritaville, where people come to get away from it all—and stay to find something they never expected. With a book by Emmy Award® winner Greg Garcia (“My Name is Earl,” “Raising Hope”) and Emmy Award® nominee Mike O’Malley(“Survivors Remorse,” “Shameless”) Escape to Margaritaville is the musical comedy featuring both original songs and your most-loved Jimmy Buffett classics, including “Fins,” “Volcano,” “Cheeseburger in Paradise” and many more. USA Today calls it “A little slice of paradise!” and Entertainment Weekly raves, “It will knock your flip-flops off!” So don’t let the party start without you.