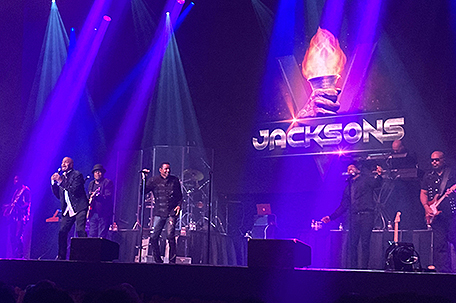 The Jacksons — Jackie, Tito, and Marlon, along with a backup singer and band — came to town and performed nearly all their hits and fan favorites during their sold-out concert at the Parx Casino’s Xcite Center in Bensalem.

The concert raised funds for Universal Family of Schools to help students and young scholars in underrepresented areas of Philadelphia achieve their career and academic goals.

Kenny Gamble and his wife Faatimah Gamble were in attendance and accepted a $35k donation from Parx Casino.

The iconic Jackson brothers opened with their hit song “Can You Feel It,” and closed with their younger brother, Michael Jackson’s “Wanna Be Startin’ Something.” In between the crowd sang along to “Show You The Way to Go,”  “ABC,” “Shake Your Body (Down To The Ground),” and “Never Can Say Goodbye.”

The performance was energetic, top tier, and as Marlon Jackson said “A Jackson Party on the Stage.”

One night only –The Jacksons perform at Parx Casino Xcite in Bensalem Sept. 10