The Idea of Nina 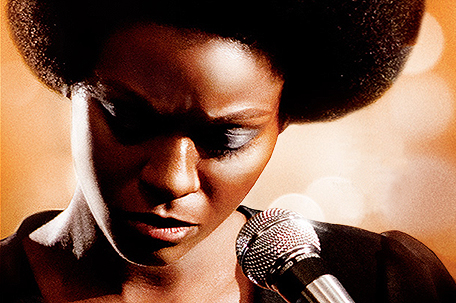 While the new biopic Nina has many asking “Why?!” when it comes to the casting of actress Zoe Saldana, the better question might actually be “Who thought this was a good idea?!”

When it was announced in 2012 that a biopic of Nina Simone was going to be made and that Zoe Saldana, best known for the reboot of Star Trek, Avatar, Guardians of the Galaxy and Drumline would play the singer/activist, the collective groan from Simone’s fans was so loud that it could have been heard in the France she called home.

The biggest complaint from everyone was that, well, Saldana looked nothing like the legendary chanteuse and would have to undergo some serious cosmetic changes to even come close.

After several false starts (the movie was supposed to be released in December), the trailer for Nina was released last week. 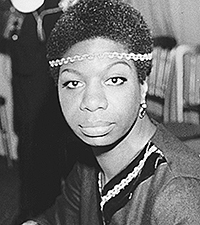 It hit with a thud, as most things that involve a combination of blackface and prosthetics often do. Singer India. Arie summed up the feelings of many in an interview with the Huffington Post.

“When you think about the way that we as human beings can inspire each other by being able to be our authentic selves, to deny someone who looks like Nina Simone the opportunity to play her is sad,” Arie said. “It would have been important and impactful had they made a movie about Nina Simone where the actress really looked like her. It would have changed someone’s life, I think.” 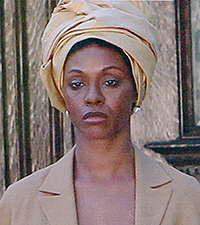 While actresses Queen Latifah and Paula Patton supported Saldana, most folks savaged her via social media for taking a role that probably should have gone to someone like Emmy winning actresses Viola Davis of “How to Get Away With Murder”, and Uzo Aduba of “Orange Is The New Black”, or Oscar-winner Whoopi Goldberg (who Simone herself wanted to portray her in a film according to published reports), or Grammy-winning artist Lauryn Hill, who recently released a Simone tribute album.

But while it’s easy to come down on Saldana because she made the decision to put on a prosthetic nose and clay-like makeup that comes real close to being blackface, we may also want to ask one question.

How did she get here? Or better yet, Who thought that casting an cinnamon colored, Afro Latina in the role of an activist whose physical presence played as much of a part in her activism as the music she made was a good idea?

The answer to that question starts in the same place that many questions regarding Hollywood tend to start: at the balance sheet, said Caril Phang, media researcher and author of the book “Birth of a Beat: How Kana:ta Creates World Music”.

“She has commercial appeal,” Phang said. “So whomever was managing the budget thought she’d be a draw to a millennial demographic. Moviegoers have changed over the years. Going to the movies used to be a social event. You planned to go to the movies. You got dressed for it. It was a social event. But now there’s a lot more competition, so the Hollywood movie machine has to do a bit more.”

“It’s crazy, but the filmmakers felt that there had to be someone who felt a little more familiar,” said Jacqueline Lisenby, Digital Brand Talent Manager for Talent House, a talent development agency based in Clarksville,Tennessee. “If the goal is make money, the thought process may be to cast a more high profile actor in the role regardless of who it is. It can be difficult to receive financing for a project that’s largely a minority cast and in order to get the project made, you have to go with the mainstream..”

But where the makers of Nina appear to have made a miscalculation is in how people would react to the physical changes that Saldana ended up having to make to appear in this film, Phang said.

Unlike Will Smith, who had to go through punishing physical workouts to transform himself into Muhammad Ali in his prime for Ali and Jamie Foxx, who had to learn the world of the blind that the late Ray Charles inhabited for Ray, the transformation Saldana was one that didn’t take into the experience Black women, a group that has customarily been marginalized, has had to endure, Phang said.

“In order to play Nina Simone, Zoe Saldana had to go through additional costuming,” she said. “What a lot of us in the African diaspora found offensive is that all of the physical traits for which Nina was derided, being a thicker woman, having a big nose, having darker skin, not having a more European look, was a part of her art.”

Had the producers and directors of Nina spent more time with the icons family and friends, they may have figured that out and not cast Saldana in the first place, sparing them, and Saldana, some headaches. Phang said.

But some roles are worth the headache, especially when you’re an actress of color whose best known roles either have you painted blue and living underwater or painted red and fighting aliens.

While everything about Saldana taking the role was kind of wrongheaded, it’s kind of hard to pass up the chance to play an historical figure like Simone, said Ernest Owens, author of “The Ernest Opinion” column for Metro US  and editor of “Philadelphia Magazine’s G Philly section.

That’s because the better roles for women of color come in the form of historical figures like actress Dorothy Dandridge (which got Oscar-winner Halle Berry an Emmy nomination), singer Tina Turner (which got Angela Basset her first Oscar nomination) and Bessie Smith (which helped Queen Latifah win an Emmy).

To get your moment in the sun without having to endure what Lupita Nyong’o had to endure in 12 Years A Slave is hard to pass up, Owens said.

“Everything about [the role of Nina Simone] says Oscar bait,” he said. “It’s a complex role, and she’s an historical figure that a lot of people know about. It’s hard for Black actresses to find roles like this to some degree, so I can see the desperation of wanting a role like this. However, the casting director shouldn’t have played on that desperation.”

Nina Simone’s only child slams her, describes the singer as a ‘monster’