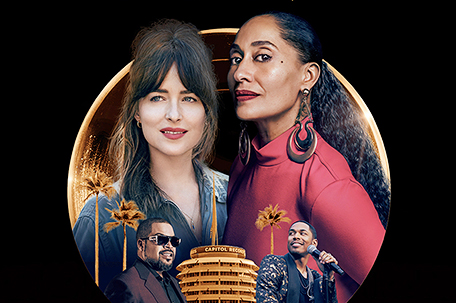 In the film — after years of success and globetrotting —Grace finds herself at a crossroads in her career as she attempts to navigate superstardom in her 40’s. Grace’s personal assistant Maggie, played by Dakota Johnson, is in awe of everything she represents. In addition to her admiration for Grace, Maggie has big dreams of becoming a famous producer in her own right. “The High Note” explores each of these women’s journey to courage and freedom from expectations at all costs.

Maggie loves music and has been surrounded by it her whole life, thanks to her radio DJ father Max (Bill Pullman). After managing Grace’s hectic schedule for three years, Maggie takes a shot at producing her own cut of a Grace Davis live album.

Maggie is also constantly advocating for Grace to release new music, which she hasn’t done in over a decade.

Simultaneously, Jack, who has been the friend and right-hand man to Grace since she was 18, is advocating for easy money by way of a residency at Caesars in Vegas. Maggie and Jack continue to butt heads as Jack tries to reestablish boundaries that Maggie refuses to operate within.

While grocery shopping, Maggie meets David, a handsome stranger who begins flirting with her immediately. A window of opportunity for Maggie to test her hands as a producer presents itself after hearing David sing a rendition of Sam Cooke’s “You Send Me” at a supermarket parking lot concert.

“The High Note” takes audiences on a voyage that explores friendship, romance, trust and the challenges that age, race and gender play in women being able to discover and actualize their dreams. Grace reminds Maggie that, “in the history of music, only five women over 40 have had a number 1 song… and only one of them was Black.”

The film explores what can happen when people let fear takeover and prevent them from trying things outside of their comfort zones. The juxtaposition between Grace and Maggie fighting for an opportunity to be heard is done seamlessly. There are also a number of parallels that are obvious between Tracee Ellis Ross’ character Grace Davis and Ellis Ross’ superstar mother, Diana Ross. Ellis Ross brings presence and solid vocals to the role and is believable as a world-renowned superstar. Her wardrobe helps drive the aesthetics home!

In addition to elements that reinforce women taking charge of their own destiny, “The High Note” offers hilarious moments of movie magic, which include a classic car sing along to TLC’s “Scrubs,” a vocal rest argument and the world’s worst apology. Ellis Ross shines as she balances a character that is both demanding yet endearing — strong but entangled in her own insecurities and vulnerability. The characters in the film are flawed, but likable, and the chemistry between the cast is undeniable.

“The High Note” is a feel-good film that takes audiences on a journey they will enjoy from start to finish — it’s a must see!

Much like her character Grace, Ellis Ross fulfills a lifelong desire to release original music. The official music video for her single, “Love Myself” from “The High Note”  soundtrack is available at:  https://youtu.be/im3lYbG-mSs.

“The High Note” will be available through a variety of streaming services via video on demand beginning  Friday, May 29t.