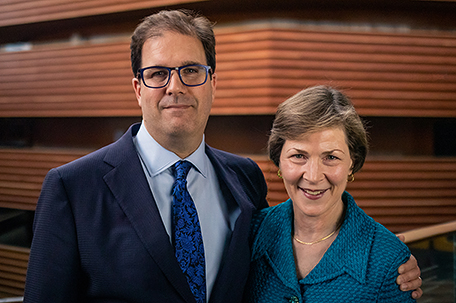 By joining forces, the Kimmel Center and the Philadelphia Orchestra hope to create an entity that will increase Philadelphia’s influence in the Arts.

When the Kimmel Center for the Performing Arts was built back in 1986, the leaders of that organization and the Philadelphia Orchestra had talked about the entities operating in concert as a joint organization.

But there were bumps in the road of that plan, said Anne Ewers, president and CEO of the Kimmel Center.

“The founders wanted the two to be together,” she said. “But they couldn’t make it work.”

Now, as Philadelphia’s arts community transforms in the wake of the COVID-19 pandemic, the Kimmel Center and the Philadelphia Orchestra are giving a formalized partnership a chance.

Last week, Ewers and Orchestra CEO Matias Tarnolpolsky announced that the two artistic entities would form a new company — The Philadelphia Orchestra and Kimmel Center, Inc. — that would allow the community to access performances and arts education while also expanding Philadelphia’s artistic universe.

The process of putting these two multi-million dollar artistic organizations together under one banner started with recognizing that the coronavirus pandemic had changed the arts, and that now might be the time to take another look at creating a partnership, Ewers said.

“Change is inevitable,” Ewers said. “So, we sat down and decided to use this opportunity to fix the places in our structure that have caused some friction.”

“There’s a great deal of trust and friendship between Anne and I,” Tarnolpolsky said. “We wanted to find out how we can do a better job connecting the arts on our stages with the citizens of Philadelphia in the most vibrant, equitable and engaging way possible. It’s an opportunity for collaboration in the performing arts space.”

So, they reached out to Susan Nelson, executive vice president at non-profit incubator TDC, to discuss how a partnership might work. As they brought in other stakeholder and eventually the board of directors of the two groups, enthusiasm for combining the two entities grew, Ewers said.

It’s a partnership that audiences will be happy with, Tarnolpolsky said.

“Audiences are the big winners here,” he said. “There will be more collaborative programming. If you see something on the stage at Verizon Hall, you’ll be able to connect it to performances that you’ll see in the plaza. Also, our commitment to Broadway at the Kimmel is hand on heart. It’s a central pillar and it’s not going anywhere.”

One of those possible connections is possible through the Kimmel’s plan to give arts organizations led by people of color the chance to showcase their creativity in a venue that might financially be out of reach otherwise, Ewers said.

Another thing that the partnership will allow both entities to do is enhance their diversity efforts.

In October 2020, the Philadelphia Orchestra named elevated Doris Parent, coordinator of its IDEAS (Inclusion, Diversity, Equity, and Access Strategies) to vice president. During the pandemic, the orchestra  partnered with the Marian Anderson Museum in South Philadelphia to play the complete symphonies of African American composer Florence Price and also played concerts at Harriet’s Bookshop, Taller Puertorriqueno the Belmont Mansion, and other places around the city as part of the orchestra’s video conference series “Our City, Your Orchestra.”

She will be a part of the new company, and the organizations have other plans, Ewers said.

The new entity becomes official once it is approved by regulators.

Guest Editorial: Kimmel Center leadership stands together in support of the NEA