‘The Girl with the Magical Curls’: A self-affirming children’s book highlighting the beauty and diversity of hair 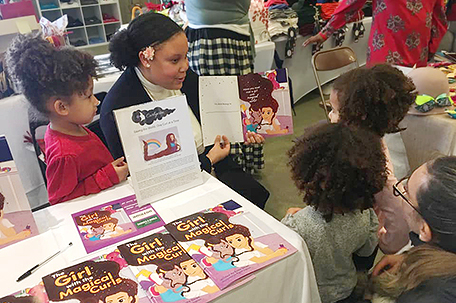 ABOVE PHOTO: Evita with daughter Tatiana at book reading.

The whimsical story “The Girl with the Magical Curls” by Evita Giron and illustrated by Raynah Jaymes, is a celebration of the beauty of African-American and multi-cultural hair. In this imaginative, evocative story, a girl named Tatiana discovers the beauty and magic of her special hair.

At the core of the story, Black and multicultural children are also encouraged to be proud of their heritage, with confidence and pride in this playful, colorful picture book which teaches readers to love every bit of themselves, especially their hair. The story also celebrates different hair shapes, textures, and styles in this self-affirming children’s book. It shines a spotlight on the beauty and diversity of hair, showing young readers that every kind of hair is beautiful.

Through her work, author Evita Giron is dedicated to cultivating equity, uplifting counter-narratives, and promoting positive identity development in children. The story itself was motivated by her four-year-old daughter, who began to ask questions about the differences in her tightly curled hair and the straight hair texture of her many friends.

“I wanted to create for little girls, like my daughter, who is multi-cultural, a character that looks just like them and shares the blessing of having curly hair,” explained Giron, who is a New Jersey native and now lives outside of New York City with her husband Denis.

The story is about a little girl who loves her curls and discovers her ringlets have a mind of their own. At the story’s outset, Tatiana, also Giron’s daughter’s name, desires to have long, straight hair like the fairy tale character Rapunzel. She encounters a mysterious hair growth oil and wonders if it is the answer to her straight hair dreams. In the end, her hair (which remains curly) does grow, but what is even better is that  she loves what her curls have become and the “magic” they perform.

“The messages in this story are relatable to not just children but to all. They are empowering—loving your hair, loving yourself, self–acceptance, and self-empowerment,” said Giron, who understood that her daughter’s curiosity was natural. It was out of her inquisitiveness and her conversations with her daughter about her hair that Giron realized that the importance placed on hair texture in young girls and women’s attractiveness could be particularly detrimental to their psychological well-being, because girls and women are more likely than boys and men to base their self-esteem and self-worth on the appraisal of others.

Giron, a graduate of  Rowan University, began writing poetry and short stories at the age of 12- while in junior high school. She said it was her life-long passion for writing that enabled her as a mom to respond to the cultural din that she felt questioned what years of activism is still seeking answers to, in a way we can uniformly accept: Who are we, what is our standard of beauty, and where are the roots of that beauty to be found?

She noted that “we can’t always agree on the answers, and we both accept and reject the conclusions forced on us by the larger White society.” However, she believes these questions spring from the social positions that are central to American culture.

Giron believes that there are also other questions that hair leads to as well –  about femininity, and questions that haunt women of all shades, hues, and races. Why do we have to live under a global doctrine that suggests femininity is in the length and straightness of a woman’s hair?

“Real beauty, the kind that can light up a room literally and figuratively, radiates from within. Black women, like women all over the world, live imprisoned by a cultural belief system about beauty and hair whose time must pass for the sake of our children,” Giron said.

Speaking of her own hair journey, Giron sports her natural hair, which she describes as a mixture of loose and coil/kinky curls. She recalls, that about the age of 12, she graduated from a kitchen salon, with her mother as a beautician, to the beauty salon, where there were women in professional uniforms, who washed and conditioned her hair and straightened it with a hot comb without the pain her mother’s inexperience produced.

Sitting in their midst of the salon for hours at a time, she heard women gossip about a myriad of topics that ranged from relationships to jobs; the progress of their children and church activities. Going to the beauty parlor was as much about growing up and being initiated into the culture of grown women in her community as it was about her hair.

As she aged, Giron, who is now 37, became an adherent of the natural hair movement opting to “go natural”. She now had choices and increased awareness of who she was.

“I now knew I did not have to be defined by my hair and think less of myself because of the texture of my hair,” she explained.

To help others celebrate their diversity, multiculturalism self-esteem and awareness, Giron created the blog Curlyvita.com. The responses on the blog has taught her that Black and multicultural women make their hair choices for reasons beyond reflexive conformity to White beauty standards, reasons such as convenience and the practical need to “fit in” to a prevailing White standard of beauty for the sake of their careers.

“But I know too how deeply the wounds of racism and self-hatred have dug into the souls of Black and multicultural men and women,” she said. “I still hear too many Black and mixed-race women, and girls of all ages, talk obsessively among themselves, on the internet, in social media, and face-to-face, about their desire for “good hair” and how much they fear having “bad hair” because they do not conform to certain beauty standards.”

The response Giron is pursuing may be found in former first lady Michelle Obama as a positive example. In her opinion, Obama has been crowned as an American queen of style and glamour. She is considered by many ordinary folks, as well as those who are the arbiters of fashion and style, to be beautiful and elegant and a premier symbol of American female beauty, as influential as the late Jacqueline Kennedy Onassis. And her hair—whether it’s straight that day, straight but curly, or straight and shiny —has been an endorsement of conventional, acceptable styles. Michelle Obama’s hair has been accepted world-wide.

Giron, who forwarded a copy of her book to Obama, points to the former first lady as one Black woman in America who has won the hair wars. And the question begs beyond the scope of hair, “Who would have imagined a beautiful brown-skinned, identifiably Black woman holding the position of first lady?”

(Evita will be in Philadelphia February 16th, at Uncle Bobbies Book Store for her book signing from 12-2pm)