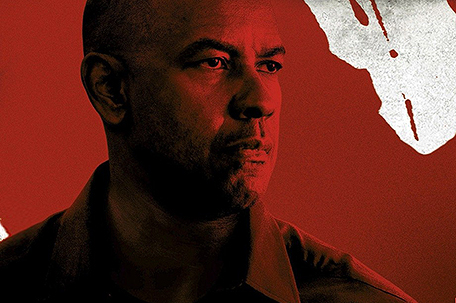 On the surface, Robert McCall (Denzel Washington) is a perfectly-pleasant, hail fellow well met. By day, the affable widower is employed as a sales associate at a hardware superstore where he jokes with co-workers who call him “Pops.” Evenings, he retires to a modest apartment in a working-class, Boston community, although bouts of insomnia often have him descending to a nearby diner to read a book into the wee hours of the morning.

The dingy joint looks a lot like the dive depicted by Edward Hopper in the classic painting “Nighthawks.” Among the seedy haunt’s habitués is Teri (Chloe Grace Moretz), a provocatively-dressed prostitute who hangs out there between clients.

Robert takes a personal interest in the troubled teen, a recent immigrant whose real name is Alina. He soon learns that she’d rather be pursuing a musical career than sleeping with stranger after stranger. Trouble is she’s under the thumb of Slavi (David Meunier), a sadistic pimp who’ll stop at nothing to keep a whore in check.

A critical moment arrives the night she arrives in the restaurant and hands Robert her new demo tape while trying to hide a black eye. But he becomes less interested in the CD than in the whereabouts of the creep who gave her the shiner.

What neither Teri nor anybody else in town knows is that Robert’s a retired spy who had cultivated the proverbial set of deadly skills over the course of his career. At this juncture, the mild-mannered retiree reluctantly morphs into an anonymous vigilante more than willing to dole out a bloody brand of street justice on behalf of Teri and other vulnerable crime victims with seemingly no recourse.

Thus unfolds The Equalizer, a riveting, relatively-gruesome adaptation of the popular, 1980s TV-series. Directed by Antoine Fuqua, this version is actually more reminiscent of Death Wish (1974), as this picture’s protagonist behaves less like the television show’s British gentleman than the brutal avenging angel portrayed on the big screen by Charles Bronson.

Considerable credit must go to Oscar-winner Mauro Fiore’s (Avatar) visually-captivating cinematography for capturing Boston in a way which is somehow both stylish and haunting. Nevertheless, the eye-pleasing panoramas simply serve as a backdrop for Denzel who is even better here than in his Oscar-winning collaboration with Fuqua for Training Day.

Revenge as a dish best served cold by a sleep-deprived, diner patron equalizer!

In English and Russian with subtitles

To see a trailer for The Equalizer, visit: