‘The Devil You Know’: A conversation with Omar Epps and director Charles Murray 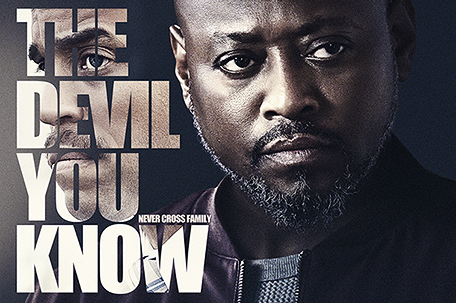 The proverb “blood is thicker than water” is often used to express the notion that family bonds are the most important. The desire to protect those familial bonds can cause people to question their moral standing. But what is the proper recourse when familial loyalty supersedes objectivity?

The film “The Devil You Know,” written and directed by Charles Murray, addresses some of these issues. The crime thriller stars Omar Epps as Marcus Cowans, a man trying to regain some sense of normalcy and dignity when he returns home from prison. The Cowans family is as close as they come with weekly family dinners and a lot of love. Their dynamic is threatened when Marcus’ younger brother Drew (Will Catlett) is found with evidence that connects him to a brutal murder. Marcus is stuck with the dilemma of whether to share what he knows with the local authorities to help protect his brother, or to remain silent.

“The Devil You Know” features an incredible cast that includes Michael Ealy, Glynn Turman, Vanessa Bell Calloway, Vaughn W. Hebron, Keisha Epps, Erica Tazel, Curtiss Cook, Theo Rossi and B.J. Britt. Epps and Murray spoke with The SUN about the eight-year journey to create this film and the importance of telling our stories.

The film, at its core, is a story about family, the power of love and the weight of choices. Murray shared why it was important for him to write and share this particular story from the Black perspective.

“I felt like we hadn’t seen anything like this for Black folks in a while. I think that the times we had in the late ‘80s, early ‘90s has gotten away from us,” Murray said. “I think about seeing Omar in Gina Prince’s movie “Love and Basketball” [and] seeing what Ernest Dickinson, Spike, Wendell B. Harris and Charles Burnett were doing — “To Sleep with Anger” is one of my favorite movies. I also love noir and thrillers, and I felt like there were a lot of movies being made that did not have our perspective, movies like “Mystic River,” “Hell or High Water,” “The Town,” [and] “Gone Baby Gone.” So, I just wanted to jump in and say you deserve that lane as well.”

The character of Marcus in “The Devil You Know” in many ways represents the complications that can haunt those who are seeking redemption. Epps explains the journey he took to bring Marcus, an ex-con and recovering alcoholic, to life.

“Half of it is the genius of Charles Murray because he created the character, but I’ll take my little half a credit,” Epps said with a laugh. “This was an eight-year [long] journey for us to get this film made, so in that sense, I’ve been living with Marcus for a long time. I took a simple approach and emotionally tried to make myself as vulnerable as possible. When you meet this character, here’s a guy that’s just on the precipice of everything in his life. He’s just gotten sober, he’s just gotten a new job, he just opened himself up to romance, and these are all things that keep him in an emotionally precarious position. Then as life is happening around him with his family and his support system, things start swirling. I think in a sense he’s doing two things… he’s building himself up and unraveling at the same time. That’s his journey in the film.”

Murray’s own family inspired him to create this film. He also found inspiration in his leading actor, Epps.

“I didn’t know O when I thought he would be the right person to do this role,” Murray said. “We were at the same agency. They got us a sit down and I pitched it to him. It’s the first time I thought about using an actor to inspire my writing. We clicked and after I wrote the first draft, we took this eight-year journey to get it made. I think Omar and I kind of became family, so it inspired how we moved Marcus through the layers of all of the time we had together.”

“A lot of how I chose to do this film reflects my family,” Murray added. “I got to watch them which was like an ongoing television show. By the time I was 9, I’m thinking [that] I want to grow up to be a filmmaker, so I put a lens on my family. What I wanted to do was introduce something that would come out of left field and think it through as to how my family would respond to it.”

The inspiration Murray found in his family came full circle during filming. Glynn Turman’s role as Preach, the screenwriter in “Cooley High” was the inspiration behind Murray becoming a screenwriter.  In “The Devil You Know,” Turman plays Lloyd Cowans, the patriarch of the family. The chemistry and strength of the Cowans family that makes audiences feel as if they’re watching a real family was the result of the friendships the cast built off screen.

In addition to showcasing the importance of loyalty to family, “The Devil You Know” also puts a spotlight on the distrust that the Black community has for the police. Audiences can see Marcus navigating the internal struggle of determining the right thing to do when it comes to involving the police.

“It was deep because here’s a guy who has had his run-ins with the law,” Epps said. “He’s in a moral [quandary]. Everyone says they’ll do such and such if this happens. No one knows what they would do until they’re actually in the moment and that’s what happens to Marcus. He’s in this moment that he never imagined he’d be in and he doesn’t know what to do. He definitely knows he wants to protect his family, but morality depends on the situation. What’s really moral and what’s not? We all have these types of issues in our families (family secrets) that we have to deal with on this journey being human beings. I wanted to bring that part out in Marcus — that conflict, because it’s something everyone can relate to in their own way.”

“The Devil You Know” is a must-see film that will leave you on the edge of your seat as you witness the struggle between the rules of loyalty defined by family and the law. The film is currently in AMC theaters exclusively, check your local listings for showtimes. In the interim be sure to follow Charles Murray and Omar Epps on social media @CharlesMurray_FilmTV and @OmarEpps.

A conversation with Omar Epps