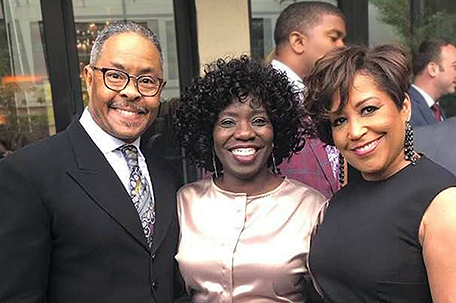 On June 12, cars began lining up at the VIE restaurant, where some of the most accomplished people were emerging from cars, brimming with elegance, power, grace and purpose.

They kept coming until the space was filled with over 600 people from all walks of life and industry, with one primary goal in mind — to raise funds that would support deserving students at Community College of Philadelphia.

They were all there to honor Philadelphia Eagles safety Malcolm Jenkins for his advocacy work in marginalized communities, and Julie Coker Graham, president and CEO of the Pennsylvania Convention and Visitors Bureau, as a visionary leader in business and industry.

The speeches from all the recipients and community leaders left the audience moved and inspired, and the response to them levied a return of over $300,000 in funds raised, which will support students who would not otherwise be able to attend the institution.

It was quite a feat for Dr. Donald Guy Generals, who is the president and visionary of the campus of 30,000 students, and has worked tirelessly to develop strong relationships with the business community to support the students and staff of the college.

“This fundraiser is a way to acknowledge and honor those who committed themselves to college admissions,” Generals said. “Our goal was to honor students, alumni and community together, to celebrate the college and its mission to eradicate barriers for those who [wish] to attend college.”

CCP has in existence a “College Promise” program that subsidizes whatever financial aid doesn’t cover for students. For the last three years, 900 students have been able to attend college with no financial burdens. Most of the funds raised from the Black and Gold Gala goes towards this program. It is a worthy cause.

Although one of the notable honorees, Hayward L. Bell, was a corporate executive who worked in Waltham, Massachusetts, his heart has never let go of his South Philadelphia roots or Community College of Philadelphia, the place that set him on a path to success.

Bell, who earned an associate degree in Applied Science in Accounting from the College in 1973, was chief diversity officer for Raytheon, a global technology and defense company with 63,000 employees. He’s had a successful career and wanted to make sure other inner city students could follow his lead. With a $125,000 gift last year, he endowed an annual scholarship that provides one full-time or part-time student at Community College of Philadelphia with up to $5,000 for tuition and fees. In addition, he has agreed to personally mentor the recipients.

His acceptance speech was riveting. Bell spoke of not being imprisoned mentally by the messaging he received as young man of color, now he learned to ask for help along the way, and his message to young Black men especially was one of vulnerability and redemption. He reinforced the ability to ask for help, which is something Black men struggle with because of the daily disappointments many of them face. He stressed that Black men do not want to project vulnerability, but that it needs to happen in order for them to get help. He cautioned that vetting the source is important, because they want to seek help from the right people. Bell is proud to be associated with the Center for Male Engagement led by Derrick Perkins at CCP, who tells the young males often to love each other and believe in themselves to overcome all the negative input and lack of validation around them.

“Overcoming the barriers are hard but not impossible,” Bell said. “We are prisoners of our own experiences, whether we like it or not.” He went on to say that people who are growing will revisit experiences and discard what no longer works for them.”

There were several alumni student awards given as well. One highlight among the stars was Antoine Mauldin.

At the age of 24, Mauldin’s girlfriend encouraged him to go to school for an engineering degree when he began facing challenges with a higher up at his former job, who was determined to keep him loading boxes so that he would not be able to continue his natural knack towards IT (Information Technology) as a telecommunication specialist, where he thrived.

Mauldin’s determination at such a daunting task, led him to CCP, where he juggled working full-time with going to school.

“I was told hundreds of times that I would not make it, and I wanted to quit hundreds more,” he said.

Determined not to give up, he began researching how he could advocate for himself at work and school, and did just that. Mauldin studied to and from work on the train, and wrote letters to his supervisors who allowed him to attend classes between his work hours. And when he was researching which university attend after CCP, he was thrilled that Dr. Cohen from Temple took his calls and guided him the rest of the way.

“My mom always told me that pride comes before the fall, so I was never afraid to ask for help,” he said.

His willingness to be vulnerable led him to the place where he graduated in 2018 with a degree in engineering.  His former job would not allow him to interview for any engineering positions he applied for, so he took the leap, interviewed at another company, was hired and given one of the highest salaries an engineer could receive.

Mauldin continues to remain humbled by his journey. It inspired one of his co-workers, Greg Zozula, who also rose to become an electrical engineer by following Mauldin’s template.

“As hard as this journey was, I must give credit to great bosses back then – Bill Valentine, Bill O’Brien, and the chief department head Bill Zebrowski – who all stepped up to support me when l needed it most.” Mauldin remarked.

After taking four classes a semester AND working 60 hours per week, Mauldin made it to his goal by seeing the end in sight. CCP was the impetus for his success, coupled with his will, hard work and drive to succeed.

Op-ed- Community College of Philadelphia: A Beacon Of Hope With A Progressive Mission