The Broken Hearts Gallery: A Review 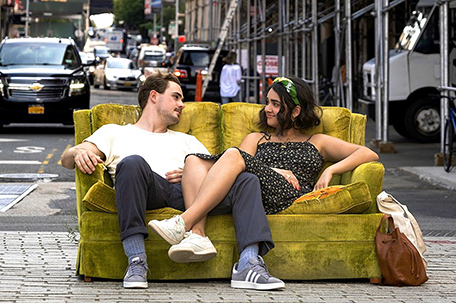 What remains after a breakup? Pictures? Clothing?  Appliances? Are those souvenirs sentimental or constant reminders in the form of torture apparatuses of love(s) lost? Maybe it’s both.

Over the years, she’s acquired a random assortment of items left over from past relationships. Lucy decides to put the reminisce of her broken heart and all of its memorabilia on display, in a gallery for all to see. Her philosophy summarized is that healing is a process, one that would best be helped by a collective effort… we’ve all loved and lost after all.

After the self-proclaimed “worst night of her life” Lucy heads home in what she thinks is her Uber… except it isn’t. It’s the personal car of a perfect stranger, Nick. Nick played by Dacre Montgomery, is kind beyond measure as he listens to Lucy overshare about her latest breakup with coworker Max (Utkarsh Ambudkar).

Their very public breakup and her subsequent meltdown — in front of her peers and her boss no less — also results in Lucy getting fired. Lucy soon realizes she’s in the wrong car but escapes safely with no threat of danger from the charmingly handsome Nick.

Lucy shares the news of her breakup with her longtime best friends and roommates Nadine (Phillipa Soo) and Amanda (Molly Gordon). Throughout the film, viewers experience the sacred bond and hilarious dynamic of Lucy, Nadine and Amanda’s friendship. In this instance, they immediately respond with what appears to be Lucy’s post breakup routine: swaddling her with blankets on the couch, offering gifts in the form of junk food and blocking out the sun.

At the behest of her friends, Lucy finally admits to having an unhealthy attachment to the miscellaneous things that her exes either left behind — or that she’s commandeered. Lucy’s friends convince her to return all of the stuff she’s compiled back to her exes. The only thing that remains is the how. After Nick intercepts yet another disastrous encounter with Max, he and Lucy, when they end up at his old building.

A fellow creative, Nick plans to convert the former YMCA into a hotel called The Hotel Chloe. After a series of unbelievably adorable rounds of banter and flirting, Lucy conceptualizes the idea of turning part of the hotel space into a gallery of broken heart memorabilia. She picks up a marker, writes the amount of time she dated Max on the wall, hangs his tie and pens the following directions, “leave your heartbreak here.”

“When love crumbles how do you preserve its ruins?” Lucy asks this while trying to make sense of this new direction she embarks on towards closure. She soon realizes that she’s not alone. The social media page she creates for The Broken Hearts Gallery grows rapidly and the donations, stories and video entries of other broken-hearted people pour in.

Lucy’s background in art helps her curate the hotel space which becomes a beautiful ode to healing. As the gallery continues to grow, so does the friendship and developing romance with Nick. The chemistry between Lucy and Nick is palpable, playful and pure and truly a delight for viewers.

The Broken Hearts Gallery is not only brilliantly executed by the cast, it’s relatable. Lucy like so many of us, begins this journey because she’s struggling to see her value after a breakup. She’s basing her self-worth on how her ex views her and how quickly he appears to have moved on. A lesson in psychology, Lucy holds onto stuff as a way for her to hold onto the people she doesn’t want to lose… a distant hope that her collection of things will somehow foster a reconnection with those people.

We later learn that the fear of forgetting and being forgotten stems from the fact that Lucy’s mother Cheryl, who like Lucy finds the art in everything, has Alzheimer’s. The loss of her mother’s memory was Lucy’s first heartbreak.

The Broken Hearts Gallery is filled with swoon worthy moments and perfectly timed one-liners. It also comes with its fair share of life lessons regarding self-love and the unpaved path to healing. The cast is stellar and the tempo in which Lucy and Nick fall in love is perfectly juxtaposed with witty dialogue and constant laughter.

The Broken Hearts Gallery is a must see! It opens in theaters on Friday, September 11th. Due to COVID-19 restrictions, be sure to check your local listings for details on theater guidelines and safety protocol.