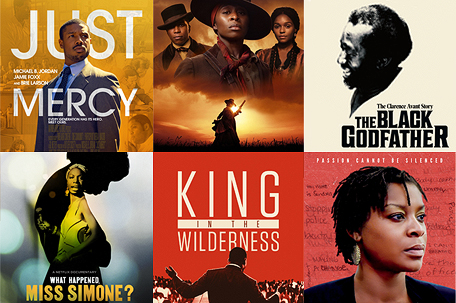 If you’re looking for something to check out with the family this Black History Month, here’s some things you might find interesting.

A couple of years ago, the folks at Marvel Studios proved that they were the smartest marketers in the world when they released the film “Black Panther” during Black History Month.

When the movie hit theaters on Feb. 16, 2018, Black people got dressed up in various forms of African garb and went in groups to sold-out shows. Some of us went to the theaters to see it more than once.

I know it got a lot of my money.

To me, that proved a couple of things.

One, that Black folks will come out in droves to partake in entertainment that’s heritage driven and done really well. It also proved to me that if you can connect it to Black History Month in a way that doesn’t look obvious, and in some ways gets you to look at things from another perspective or teach you something you might not know, folks will go out and spend the money as well.

Now, there’s no “Black Panther” on tap this February. The closest we might get to that is “The Photograph” starring Issa Rae, and since that opens the on Valentine’s Day, there might be some sort of “Girls Night Out,” or “Black Love Matters” thing that might get connected to it.

But since Black History Month is the one month out of every year where most of the virulent racists you see on Twitter take a minute before telling you “Why do you always have to talk about Black stuff?”, it’s a chance for all of us to connect ourselves and our kids to media designed to counteract the “Blacks didn’t actually mind being slaves” nonsense you might get in the average history textbook these days.

But if you have the time, or can make the time, here’s some things you and your family can check out for Black History Month.

“Just Mercy”: This biopic, which was the opening night film at the Philadelphia Film Festival, stars Michael B. Jordan as Bryan Stevenson, a lawyer who went from Delaware to Harvard to Alabama to create the Equal Justice Initiative, an organization that helps people on death row get the justice that they don’t often get in court. Oscar-winners Jamie Foxx and Brie Larson also star. In theaters now. Here is the SUN’s review: https://www.philasun.com/local/southern-justice/

“Harriet”: This Oscar-nominated biopic starring Cynthia Erivo tells the story of Harriet Tubman and her role in making the Underground Railroad the bane of slave masters all over the South. Also starring Leslie Odom Jr. and Janelle Monáe, the film features Philadelphia in a way that makes you forget that we have a tribute to a fictional character on the Ben Franklin Parkway. There will be free screenings of “Harriet” at the UA Riverview Theater on Delaware Avenue on Tuesday, Feb. 11 at 7p.m. and 9:30p.m. For more information and to register for tickets, go to:  https://gofobo.com/index.php/main/blp/UmVnYWxIYXJyaWV0  You can also find the film on Apple TV, Google Play, Amazon Prime and Vedo and the SUN’s review here: https://www.philasun.com/local/giving-justice-to-an-icon/

Sometimes, you just don’t feel like leaving the house to find entertainment.

And thanks to streaming services like Netflix, Disney+ Apple TV and Hulu, you don’t have to. Add television services like YouTubeTV, Sling TV and Philo and Roku, and you don’t even have to have cable to look at some really great things.

Netflix: To say that Netflix has a lot for you to check out for Black History Month would be the understatement of the year.

“Dolemite Is My Name”: Eddie Murphy returns in the biopic “Dolemite Is My Name”, which tells the story of comedian Rudy Ray Moore and how he got the character he’s best known for, Dolemite, onto the big screen. While it might be a tad too raunchy for your elementary school aged children, those in their late teens who might want to learn something about both the history of Black cinema and Black comedy might get a lot out of this film, which also stars Wesley Snipes, Keegan Michael Key, Craig Robinson, Mike Epps, Tituss Burgess and Da’Vine Joy Randolph. To see the SUN review, click here: https://www.philasun.com/entertainment/the-return-of-the-signified-monkey/

“When They See Us”: Ava DuVernay’s four-part mini-series on the Central Park Jogger case and the five young men who spent time in jail for a crime they didn’t commit is a gut punch that brought home for a lot of us just how long the criminal justice system has needed reforming. Again, this might not be one for the elementary school aged kids, but young people aged middle school and up will probably learn a lot from this Emmy-Award winning drama.

“The 13th”: While everyone knows that the 13th Amendment to the Constitution allowed Blacks to be released from slavery to serve as soldiers in the Union Army, and is recognized as the start of the move toward abolishing slavery overall, what you might not know is that this only applies as long as you stay out of prison. That’s just one of the many things you’ll find out about the criminal justice system and the fine print that we sometimes miss when talking about it from Ava DuVernay’s Oscar-nominated documentary. You may have to explain some things to your elementary school-aged children, but it should be understandable to the middle and high school aged folks on your couch.

“The Black Godfather”: For months, people have been telling me that I need to check out this documentary on Netflix called “The Black Godfather.” The subject is Clarence Avant, a Black man who doesn’t look like one of the most powerful men in music, movies and politics, but he is. And the documentary is thorough. So, now I’m telling you to check it out.

“What Happened Miss Simone?”: This documentary uses rare archival film and never before heard recordings of some of her best known work to tell the story of musician/activist Nina Simone. It’s a story of a woman who used her genius as an artist to be an advocate for the things she believed in, but was ultimately done in by the anger that fired that art and advocacy.

And, of course, “Black Panther,” the film starring Chadwick Boseman as the King of Wakanda, is still on Netflix for the moment. You might want to catch it before it heads to Disney +.

“The Last Days of Richard Pryor”: ABC News documentary on the legendary performer tells the story of a man whose comedic genius and his demons were constantly fighting for control.

“Live In Front Of A Studio Audience”: Jimmy Kimmel and Norman Lear have teamed up to bring Lear’s 70s television classics to television as live performances. If you didn’t get to catch them when they aired live on ABC, you can see Jamie Foxx as George Jefferson in “The Jeffersons” and Andre Braugher as James Evans in “Good Times.” There are even some surprise guests that stop by.

Sling TV, for those of you who don’t know, is a streaming service that provides television viewing for those who don’t want to be tied to the cable cord anymore. It includes add-ons like a sports package and movie channels like HBO, Showtime and others.

It also includes a movie section, which brings me to The Film Detective, a channel and app dedicated to showcasing classic films.

The Film Detective’s flagship channel on Sling TV will be featuring films dedicated to Black History Month every Wednesday at 6pm. It’ll start with a showcase of films from pioneer Oscar Micheaux such as “God’s Stepchildren” (1938) and “Within Our Gates” (1920). The channel will also feature the Oscar-nominated film “Sounder”, starring Cicely Tyson and will celebrate Sidney Poitier’s 93rd birthday by showing the film “The Mark of the Hawk.”

HBO has a lot to offer for Black History Month. In addition to the hit series “Watchmen”, there is the documentary “King In The Wilderness,” which looks at the last years of the Rev. Dr. Martin Luther King’s life from the 1965 Voting Rights Act to his death in 1968, “True Justice: Bryan Stevenson’s Fight for Equality,” and “Say Her Name: The Life And Death of Sandra Bland.”

Now there’s probably more than this happening in entertainment for Black History Month, but most of what I’ve spotlighted here are things that SUN readers can watch as a family.

But don’t be afraid to explore and see what other things are out there. You might discover something.