The biggest concerts & music festivals coming to Philadelphia this Summer 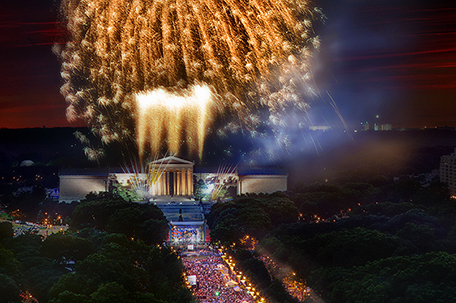 ABOVE PHOTO:  As the birthplace of America, Philadelphia knows how to shine. Fireworks blazing over the Philadelphia Museum of Art are a Fourth of July tradition during PhiladelphiaÕs multi-day Sunoco Welcome America! bash. Timed perfectly with exhilarating live music, the fireworks paint the skies over the Benjamin Franklin Parkway.  (Photo by G. Widman for GPTMC)

This year, concert-goers will enjoy a steady flow of arena-rocking performances at Philadelphia stadiums and entertainment venues. Whether you’re more at home listening to seasoned talents like Bette Midler and Billy Joel sing the classics, or are ready to rock out to the sounds of music industry newcomers like Iggy Azalea, Taylor Swift and Ariana Grande, this list is definitely for you.

To help you navigate the city’s musical offerings, we’ve compiled this list of can’t-miss performances by A-list acts that are making their way to Philly in 2015. New shows are announced regularly, so stay tuned for the latest details.

Read on for our top picks of upcoming concerts in Philadelphia. 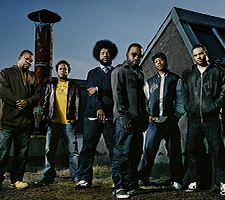 15. Roots Picnic brings another all-star lineup to Festival Pier on May 30.

The Legendary Roots Crew may be everywhere these days, including playing as the house band for “The Tonight Show Starring Jimmy Fallon,” but the iconic hip-hop band always brings it back to their hometown of Philadelphia. Once again this year, The Roots will take over Festival Pier at Penn’s Landing with their signature music festival, Roots Picnic. The Roots handpick the entire lineup, and it’s always packed with some of the hottest names in music — from hip-hop, indie, R&B and more. Enter the Visit Philadelphia Roots Picnic Contest to win a pair of tickets to this year’s show and check out the full lineup on Philly 360°.

14. The Boys Of Zummer Tour with Fall Out Boy & Wiz Khalifa heads to Susquehanna Bank Center in June.

Wiz Khalifa and Fall Out Boy hit the Susquehanna Bank Center on the Delaware River Waterfront in June.

In support of their latest projects, American Beauty/American Pyscho and Blacc Hollywood respectively, Fall Out Boy and Wiz Khalifa team up for a summer tour that is set to touch down in over 40 cities across the U.S. This tour includes opening performances by Hoodie Allen and DJ Drama.

Riding high off the release of her latest album, “1989,” Taylor Swift is officially an international pop music icon. In a world of declining record sales, Swift’s fanbase remains strong. Her 2012 album Red sold a million copies in its first week alone, and would go on to achieve quadruple platinum status in the states.

Founded by South African vocalist and guitarist Dave Matthews, Dave Matthews Band is one of the most successful acts in the history of music. Blending clean pop production with a cross of rock, funk and world music, Dave Matthews Band has consistently ranked as the largest ticket seller worldwide — selling over 18 million concert tickets since coming together in the early 1990s.

11. The Philly 4th Of July Jam returns to the Parkway with The Roots in July.

Celebrate America’s birthday with the “Largest Free Concert in America.” A Philadelphia tradition, Wawa Welcome America’s Philly Fourth of July Jam and Grand Finale Fireworks will again return to the Benjamin Franklin Parkway with Miguel and Jennifer Nettles backed by the city’s favorite band, The Roots. Stay tuned for more information on this year’s headliners and the full festival schedule.

The lawn at the Susquehanna Bank Center.

Fresh off the release of their newest album and accompanying HBO miniseries, both entitled “Sonic Highways,” the Foo Fighters add two Philadelphia dates to their ongoing stadium tour. A love letter to American music, Foo Fighters frontman Dave Grohl recorded the project in historic studios across the country. For the tour, the band will play music from the new release, along with some old fan favorites and covers. 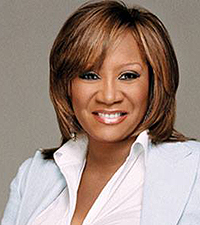 This year, the Dell Music Center in Fairmount Park will kick off the 2015 Essence of Entertainment Summer Concert Series with an all-star Philadelphia lineup that includes saxophone phenom Pamela Williams, touring trombonist Jeff Bradshaw and the original R&B/Soul diva Patti LaBelle. Together, these notable talents will create an unforgettable evening of R&B music under the Philadelphia summer sky. Keep an eye on the Dell Music Center website for details on ticket sales, showtimes and the full summer concert series lineup of shows.

8. Idina Menzel comes to The Mann Center in July.

The star of Broadway smash hits “Rent” and “Wicked”, and the voice behind the multi-platinum hit “Let it Go” from Disney’s Frozen, Idina Menzel comes to The Mann this summer. For this one-night-only affair under the Philly sky, Menzel will take her audience on a special journey through classic pop performances, musical theater favorites and songs from her own personal catalog of music.

Philadelphia certainly holds its own during the buzzing summer music festival season, and the popular XPoNential Music Festival will prove this once again this year. A must-attend summer music festival, XPoNential brings an awesome assortment of alternative rock acts to multiple stages at two venues, Wiggins Parks and Susquehanna Bank Center, on the Delaware River waterfront in Camden, NJ. Stay tuned for more details.

Following up on her third studio album “The Pinkprint,” rapper Nicki Minaj embarks on the North American leg of a US tour in support of the project. The Young Money powerhouse performs at the Susquehanna Bank Center this summer alongside a heavyweight lineup of artists, including Philly’s own Meek Mill, Rae Sremmurd, Tinashe and DeJ Loaf.

Get ready for one of the biggest block parties of the summer as the Mad Decent Block Party returns with a two-day affair on the Philadelphia waterfront. Produced by Philly-based DJ and Mad Decent founder Diplo, this year’s block party features performances from Major Lazer, Swizzymack, ILoveMakonnen and others at Festival Pier on Penn’s Landing.

4. Phish jam at the Mann Center for two nights in August.

After two sold out shows in Philadelphia last year, legendary rockers Phish return to the Mann Center for the Performing Arts this summer for another double-header under the Philadelphia sky.

3. The Philadelphia Folk Festival returns for its 47th Year in August.

Schwenksville is hopping during the Philadelphia Folk Festival. (Photo by G. Widman for Visit Philadelphia)

2. Billy Joel brings down the house at Citizens Bank Park in August.

Even though he hasn’t released an album of new material in over two decades, the demand for Billy Joel’s live concerts remains strong. With a career that has spanned over 40 years, Joel is unanimously hailed as one of the most influential rockers in history. And, with more than 20 U.S. arena concerts scheduled for 2015, there’s no sign that he’s slowing down anytime soon.

1. Jay Z’s Made In America Festival is back for Labor Day Weekend.

It’s back. For the fourth year in a row, the wildly popular Budweiser Made In America festival will hit Philadelphia with two days of genre-defying music on the Benjamin Franklin Parkway. The festival mastermind, Jay Z, will once again curate an epic lineup of the industry’s hottest talents to deliver another round of show-stopping performances across multiple stages. Full details on this year’s festival are still to be confirmed, so stay tuned for more information.

The Made in America Music Festival draws thousands to downtown Philadelphia for an epic two-day music fest. (M. Edlow for Visit Philadelphia)

With dozens of top performers and multiple stages on the Benjamin Franklin Parkway, the two-day music festival is one of the year’s can’t-miss events. (M. Edlow for Visit Philadelphia)

Six must-do Philadelphia festivals this Spring and beyond