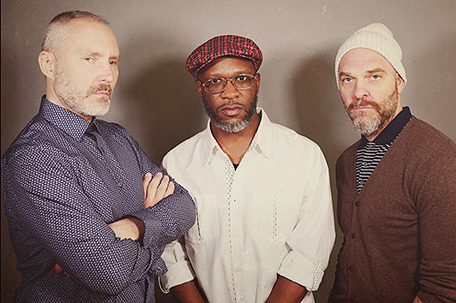 ABOVE PHOTO: The Bad Plus

Music is a universal language. The speech pattern of jazz is a form of communication uniquely its own. The Bad Plus, a renowned jazz band has been speaking to jazz lovers for over 18 years. The jazz trio is comprised of founding members Reid Anderson on bass, Dave King on drums, and the newest member, Philadelphia’s own Orrin Evans on the piano. The Bad Plus is coming to the Kimmel Center for the Performing Arts Perelman Theater to perform as part of the tour for their latest album “Never Stop II.”

Orrin Evans spoke with the SUN about his journey with The Bad Plus, and coming back to perform at his hometown.

Evans found his love for music through osmosis. His mother was an opera singer, and music was a consistent part of his life.

“I had people around that played music,” Evans said. “my uncle was a jazz saxophonist and my dad had a great love for Jazz and I was always around theater and show tunes with my mom being a singer. Jazz was so close to the other music I was hearing which was gospel and R&B… it was an extension of that music.”

“Whether it was birthday parties or cookouts, I just always loved listening to music and buying records, so it’s always been apart of my life,” he continued. “As far as wanting to be a musician, that probably wasn’t until middle school when I decided this is what I really wanted to do.”

Evans’ love for music is evident in his impressive body of work. Evans has worked with a wide array of musicians as a pianist, band leader and producer. He collaborated with long time associates bassist Christian McBride and drummer Karriem Riggins on “The Evolution of Oneself”… a fusion of jazz, neo-soul, hip-hop and country. When asked if he has a favorite project to date, Evans stated, “the next one will be my favorite”, with a laugh. “I’ve done projects on my own label with two different artists, one named Jon Michel and the other one with a gentleman named Caleb Curtis. Jon Michel is from Haiti, so there are some influences of that culture in the music. Caleb is a White saxophonist from Michigan… so they are totally different projects and I love them both. I just finished a third project with a piano player. I like the variety of it. What we have in common is that we’re all from the same village. We all came together musically at some point, but we all have different approaches to music.”

Evans celebrated one year with The Bad Plus in January.  He explained that the name has no real meaning behind it,  saying, “that’s the fun part of it — people try to figure out what it is. Before I knew it didn’t mean anything, I thought it meant something too.”

Although Evans has only been with The Bad Plus for a year, the chemistry with his band members happened very quickly. Their newest album, “Never Stop II” was recorded live in little to no time.

“We recorded the album before we ever did a gig as a band. We got together and did a bunch of rehearsals and got the music together in a short amount of time. We spent two days in the studio, but we did most of the album in one,” Evans said. “Audiences that are familiar with The Bad Plus, this is just a continuation of the legacy that they’ve created. And I say they, because I wasn’t apart of the past almost 20 years. So when I joined the band my goal was to respect the sound of The Bad Plus. My goal was for this record to sound like The Bad Plus with elements and sprinkles for lack of a better word, of me. So I’m playing who I am as a piano player. I’m not the other piano player, but I’m also paying homage and respect to the history of the music.”

For those not familiar with the signature sound of The Bad Plus, Evans encourages audiences to listen and see it for themselves.

“Back in the day there was a saying, I think Art Blakey a famous jazz drummer said it, ‘I’ll tell you about it later.’ That’s how I look at the music in general — I’d rather not describe it,” he said. “It’s trio music… a piano, bass and drums. It’s three people that come together to make one sound. Sometimes when you’re cooking and you tell people how something tastes, the first thing they’ll say is, ‘I don’t like that,’ so they won’t try it. So I say, why don’t you listen. If you like the piano, drums and bass… those three things are there. Come out and see what we do with those instruments.”

As the former leader of The Kimmel Center education Jazz Standards program, Evans shared his excitement in returning to the Kimmel Center, and playing in his hometown.

“It’s always a pleasure to play at home. I haven’t played that stage for a concert in years. I played at The Kimmel Center when they first opened, and then I did a solo piano concert back in 2007.  So it feels really good to come back and play in my hometown… always.”

To support The Bad Plus and to stay up to date with their journey, visit www.thebadplus.com. The Bad Plus will perform at the Perelman Theater on Saturday, February 9th at 8pm. The weekend of jazz at the Kimmel Center will continue on Sunday, February 10th with a performance from Jazz at Lincoln Center Orchestra led by managing and artistic director Wynton Marsalis.

Visit www.kimmelcenter.org for more details on tickets and showtimes.