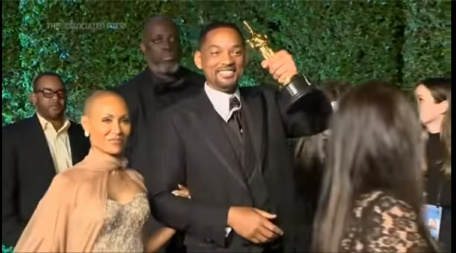 By ANDREW DALTON and LINDSEY BAHR

BEVERLY HILLS, Calif. (AP) — Will Smith gleefully danced with wife Jada Pinkett Smith and their family at the Vanity Fair Oscar party, waving his best actor trophy in the air like he just didn’t care as he rapped along to a mash-up of his own songs, from “Gettin’ Jiggy Wit It” to “Summertime.”

The only sign of the ugliness that went down four hours before — when Smith strode on to the Dolby Theatre stage and slapped Chris Rock over a joke about his wife’s hair, then gave a tearful acceptance speech minutes later — was the outsized attention given to the actor at a party where major stars and newly minted Oscar winners were everywhere.

He was mobbed by people filming the scene and squeezing next to him for selfies.

“Congratulations Will Smith, I love you!” shouted DJ D-Nice as he spun the medley.

The mob followed as Smith and his entourage made their way across the party. Smith clanked Oscar statuettes with other winners and stopped to accept congratulations and pose for photos with Timothée Chalamet.

Smith held his Oscar triumphantly in the air as he climbed into an SUV to leave after the brief party visit.

His son Jaden Smith, staying behind to party with friends, shouted “I love you! You did it!”

The shocking slap and its aftermath hung in the air and dominated conversations at the post-Oscar parties just as it did on social media and in much of the country.

At the Governors Ball, which takes place upstairs from the Dolby Theatre immediately after the show, both joy and tension were in the room. Many were excited to eat, drink and get their Oscars engraved. Many more were still processing what had happened on stage, though few were ready to express their feelings about it publicly. Rock did not appear at either party.