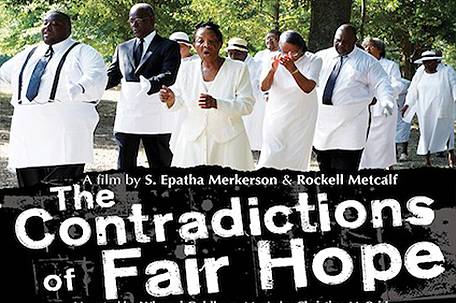 On Saturday, February 1, 2-4 p.m., AAMP presents a screening and discussion of “The Contradictions of Fair Hope.” Winner of numerous Best Documentary
awards, this documentary by S. Epatha Merkerson and Rockell Metcalf, narrated by Whoopi Goldberg and featuring music by Christian McBride, explores
temporal and religious tensions through the lens of an Alabama African American benevolent society and its signature event, the Foot Wash Festival. Free
with museum admission.

To commemorate the 50th Anniversary of Freedom Summer, the Smithsonian’s National Museum of American History will hold a National Youth Summit Wednesday,
February 5, 2014, at noon, linking high school students across the U.S. in an engaging program on the history and legacy of the 1964 youth-led effort for
voting rights and education. AAMP and the National Museum of American Jewish History will convene local students to watch and discuss the live broadcast
with veterans of Freedom Summer as well as current young Philadelphia activists. Teachers who are interested in viewing this broadcast with their classes
can register at http://americanhistory.si.edu/freedom-summer

“Step into South Africa” Saturday, February 8, 1-2 p.m. Though South Africa is often only recognized as the site of the struggle against apartheid in the
late 20th century, this nation of diverse peoples is rich in culture. In this workshop, AAMP will offer an introduction to the languages, music, religions,
rites of passage and everyday life of South Africans. Free with museum admission.

On Saturday, February 22, 1-2 p.m., join two members of the Tiberino family as they lead you through AAMP’s latest exhibit, “The Unflinching Eye: Works of
the Tiberino Family Circle.” The Tiberino Tour provides an intimate look into the exhibit, revealing the stories behind these intriguing artworks and
highlighting the ways in which this community of artists have influenced each other. Free with Museum Admission.

Explore your creative process and delve into new painting approaches Saturday, February 22, 2-4 p.m. at “Feelings to Form: Painting Big with Richard
Watson.” Help shape one of two collaborative murals, as each workshop builds on the work of previous sessions. Feelings to Form is ages 12+ only, and
children must be accompanied by an adult. Free with Museum Admission.

Additionally, AAMP offers ongoing programming which keeps Black history alive year-round, including Audacious Freedom: African Americans in Philadelphia
1776-1876, a permanent exhibit recounting the stories of and contributions made by people of African descent in Philadelphia during these tumultuous years.
In addition to an interactive timeline and ten full-size video projections, Audacious Freedom features a hands-on Children’s Corner, exploring the daily
lives of children in Philadelphia from 1776-1876.