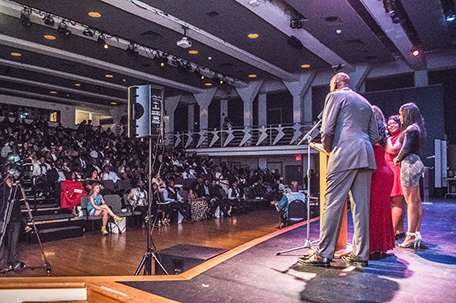 Stand-up comedian TuRae hosted the awards alongside multimedia personality and actress Mia Mendez. TuRae, who has hosted the award show since its inception, shared a few words on his experience.

“It’s the fourth year for me hosting,” he said. “It’s fun for me. I’m not in any of the films, so I get to be a fan. I get to sit back and appreciate all these great artists nominated on every level and I get to be amazed. I get to witness actresses, producers and writers bring their films to the festival from all around the world, and I get to walk through the show.”

“Floyd and his staff allow me to be free, so I’m not the typical host of an award show… I’m not stiff,” he added. “ I think that’s what makes it fun for me… and I get to honor people.”

With live music provided by The John Martin Project, the atmosphere was fun, light and smiles were abundant. First time young actress Kyla Ogden who stars in “Have You Seen Her?” walked the red carpet for the first time beaming with pride, excited to have discovered her passion for acting. “Have You Seen Her?”, directed by Deeva Gordon, had a big presence at the festival. The cinematographers of the film, Sean Chin and Jared Stryker, also shared their excitement about the film and the festival.

“It’s a coming of age story, which is based on true events,” Chin said. “It’s up for five nominations right now. It’s kind of surreal… it’s our first time with anything entered into a festival.”

In addition to some new faces present at the festival, a number of well-known and recognized filmmakers and actors were present. Rel Dowdell, director of the documentary, “Where’s Daddy?” attended. “Where’s Daddy?”, which gained traction nationwide for providing a magnifying glass on the pitfalls of child support in the Black community, was nominated for Best Documentary. Dowdell shared his thoughts on the importance of content that resonates in the Black community.

“The film has done well… it’s done way beyond what I could have ever imagined.” Dowdell said. “It’s got a 100% rating on Rotten Tomatoes. Princeton University and the University of Michigan have it in their curriculum… so does USC and North Carolina. It has a profound effect on people when they see it. It really does touch people, it gets them to emote and say things they probably would never say.”

“It’s a transcendent piece of work and I’m glad I made it,” he continued. “It makes me realize we need more Black documentaries that deal with sensitive issues like this in our community. “

“Where’s Daddy?” which was released last year, is available for viewing and purchase on a number of platforms including Amazon, Vudu, iTunes and YouTube.

The phenomenally diverse actor Christopher Mann was also in attendance. Known most recently for his roles in “Loving” and “Creed II”, Mann was nominated for Best Supporting Actor for his role in “What Death Leaves Behind”.

“What Death Leaves Behind” was screened at Sundance, the Pan African Film Festival, Houston, Cleveland, Atlantic City and quite a few other festivals,” Mann said. “But it’s always good to be home and to win something at home. Everything was shot here. Most of the filmmakers and talent are from this area.” Mann went home with the award for Best Supporting Actor.

Content creators, actors and husband and wife duo Lonyé and Peyton Perrine also took home a win for Best Web Series for “Funny Married Stuff.” Lonyé Perrine fought back tears as she shared parts of their journey with the audience.

“God gave us this vision to do this project about positivity in marriage and showing there are positive examples of marriage in the Black community,” Perrine said. “I am just really humbled with this award and grateful that my husband took this journey with me, along with the amazing cast and crew we have in Los Angeles that have become our family.”

The 4th Annual Philadelphia Independent Film Awards offers the opportunity to highlight talent that might not otherwise be recognized for their gifts. All of the nominees and all of the winners shared the same sentiment — that the road is not and will not be easy, but remain steadfast and never stop. Actor, producer and founder of The Actor’s District, Tobi Gadison, offered a powerful thought during his acceptance speech for The Impact Award. He told the audience that in the current state of our country and the globe that “the world needs our art… it helps people get through.” With platforms like The Philadelphia Independent Film Awards, indie filmmakers can continue to share their art with the world.