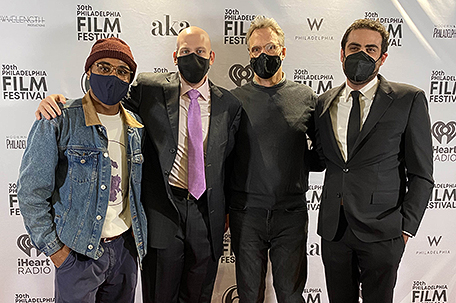 The Philadelphia Film Society (PFS) has always given Philadelphia and its surrounding communities access to brilliant films. The 30th Philadelphia Film Festival (PFF) kept in line with that tradition offering audiences over 100 films from filmmakers from all over the world. The 30th annual PFF took place from Wednesday, October 20 through Sunday, October 31. Over the 12-day event, PFF featured three North American premieres, 10 United States premieres and five East Coast premieres. PFF also offered attendees exclusive access to conversations with directors and filmmakers. The festival opened at The Philadelphia Film Center with an in-person welcome party to the delight of all in attendance.

In addition to the films that were shown in person, PFF also offered a wide array of shorts and full-length feature films online through a virtual screening platform. The following were some of the films featured online: “First Wave”, directed by Matthew Heineman, is a documentary film that showed the devastation that COVID-19 had in New York during the first four months of the pandemic. The film documented, in heartbreaking detail, the impact that the pandemic had on the medical staff at the Long Island Jewish Medical Center in Queens.

“Light Years Apart,” created by Team Spacecamp from Drexel University, is an animated short with limited dialogue about a man who longs to be back with his family after exploring various regions of outer space. On his way back to Earth, he’s hit by an asteroid and lands on another planet with purple sand. The story ends with his daughter following in his footsteps and a “thank you Dad, we made it.”

“Sisters of the Soil,” directed by Raishad M. Hardnett and Aidan M. Un, was filmed here in Philadelphia and documents the opening of Harriett’s Bookshop at the beginning of the pandemic. Harriett’s owner Jeannine Cook details her experience as both a Black woman and the owner of a bookstore. The film highlights the importance of books as a way of keeping our stories alive, the sordid and racist history and present of Fishtown and hopes for what Harriett’s Bookshop can continue to offer to the Philadelphia community.

“BJ’s Mobile Gift Shop,” directed by Jason Park, is a hilarious 16-minute-short about a Korean American man named BJ who owns a mobile company that sells everything you can think of from ties and dress shirts to paper towels. He also sells his grandmother’s kimchi — which is a big hit. The film is a hilarious tale of a hustler that also ties in the value of ingenuity and cherishing family.

“Joe Buffalo,” directed by Amar Chebib, tells the story of Joe Buffalo, a skateboarding legend from Alberta Canada who is a member of the Cree Nation.  During this short documentary, Joe shares the trauma that three generations of his family endured (which included sexual and physical abuse) while attending the residential schools the government forced them to attend. Joe, who suffered from both residential school trauma and intergenerational trauma, fought for a healthy mental state, and shared how skateboarding helped him to achieve peace.

Finally, “Senior Prom,” directed by Luisa Conlon, tells the stories of several elders who either didn’t attend their proms or couldn’t attend their proms with full autonomy because they were gay. Throughout the documentary, those seniors shared their stories and celebrated the opportunity to enjoy their prom later in life as residents of the Triangle Square retirement home.

During the closing night of the 30th PFF, writer, director and filmmaker Peter Hedges attended and participated in a Q&A session with audience members after the East Coast premiere of his incredible film “The Same Storm.” The film, shot with the cast members via Zoom, highlights the lives and experiences of a number of people during the pandemic. Everyone in the story is connected through one to two degrees of separation and a series of full circle moments. The film begins with the quote “We are not all in the same boat, but we are all in the same storm.” Hedges shared some of his journey with creating this film.

“For me I’ve always told stories that have a hero and an antihero. It was really fun to begin to think about how we’re connected,” Hedges explained. “What scene could I write that would show another side of their life and how unknowable we are, how complicated we are and how complicated this moment is. Once I understood that it was about how each of us is being tested in sometimes marvelous ways, then it was incredibly liberating… so it was a different story we get to tell.”

One of the biggest challenges to this brilliant film was directing from afar. Hedges expressed his gratitude for his actors and what he considered a collaborative effort.

“I feel so incredibly proud of them,” he said. “The actors came and trusted each other, and they trusted me. Traditionally what happens on a film is the writer writes, and the actors come and do what the writer says. I needed to make this as resonant as it could be (especially since 14 of the 24 actors were actors of color) and I was trying to write about the moment when the moment is a complicated time. One of the ways I was able to write beyond my experience was that I was able to hear their experiences. The work became co-created at times.”

Overall, the 30th PFF offered audiences a wide variety of films and subject matters. Next year’s festival will certainly give film lovers a lot to look forward to with its film selections. To find out more about the 30th PFF and to keep up to date with other screenings from The Philadelphia Film Society, visit: www.filmadelphia.org.