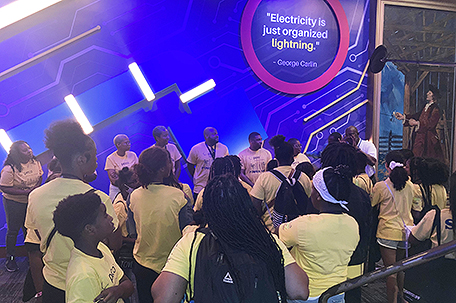 Camp Jill Scott is a free day camp powered by the Blues Babes Foundation and was created to provide fun outdoor experiences for young scholars who reside in North Philadelphia.

Aisha Winfield is the executive director at Camp Jill Scott and she oversees the programming for the Blues Babe Foundation.

“My role really is to make sure that young people that are doing what they’re supposed to do academically, from North Philadelphia, have opportunities to learn, to experience new things as well as meet new people, and to just be inspired,” Winfield said.

The camp takes place in the final weeks before the new school year begins.

“We always do camp right before school starts so that they can get those leadership development and team building skills and confidence so they return to school energetic and ready to take on any obstacle that may come,” Winfield said.

Through the generous support from PECO, campers visited the Franklin Institute for “PECO Power Day” on Friday, August 19.

The group was welcomed by chief astronomer and director of the Fels Planetarium, Derrick Pitts, and afterward, they enjoyed a screening of “Astral Almanac: A Festival of Light” in the Planetarium. The campers also had the opportunity to explore the electricity and Harry Potter exhibits.

“We are so grateful that we’ve been working with PECO for a couple of months to really forge a relationship so that they can help us to expand the work that we’re doing,” Winfield said.

“At PECO, we are deeply committed to cultivating arts, culture, and STEM in our region, as we believe it is essential to the growth and vitality of our communities,” said Romona Riscoe Benson, director of corporate and community impact at PECO Energy. “Our partnership with Jill Scott and the Blues Babe Foundation is an exciting example of how we plan to further our commitment.”

In addition to the summer program, the Blues Babes Foundation is looking to expand its family and civic engagement throughout the year.

“PECO has been a phenomenal partner,”  Winfield said. “They bring their full energy and a team to the table to make sure that they can introduce young people to all kinds of career options that they may not have thought about. And just bring that energy and excitement and love for young people and their future.”

North Philadelphia resident Amaya Jackson believes that the Jill Scott camp has already changed the trajectory of her life.

“I’ve been involved with the camp for five and a half years and I am now a CIT (a CIT is a counselor in training) [and then] on to a junior counselor,” Jackson said.

Through the Camp Jill Scott program, Jackson currently coaches and supports younger students while gaining transferable skills that she can employ in the future.

“It has made a huge impact for me, because I’m now able to go somewhere. I’m able to be busy with myself instead of staying home being bored in the house,”  she said. “I’m now able to have bigger opportunities, to meet new people — amazing people, at that. And so it’s, like, a big opportunity for me to change my life, and I actually got to meet Jill Scott.  That was super fun.

Jackson hopes that this year’s camp makes a positive difference in the lives of other young folks as it did for her.

Before summer comes to an end, the scholars will also visit the Philadelphia Zoo, the Discovery Center, Still Rise Farm, and the Charles L. Blockson Afro-American Collection at Temple University.