All Around Philly Social Scene: The 10th Annual Back in the Day BBQ draws hundreds of attendees 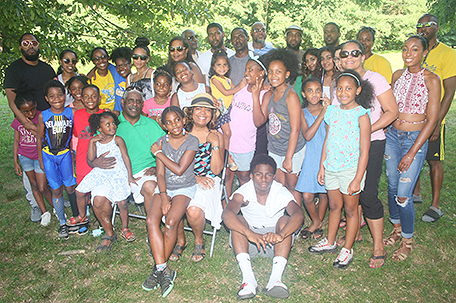 ABOVE PHOTO:  Barry Crawford (seated) and his wife (seated)  Jackie Crawford take a photo with members of their family . Barry is a committee member and will be celebrating his 70th birthday on Monday July16th.   (Photo: Robert mendelsohn)

A beautiful summer day and the camaraderie of friends and family marked the 10th Annual “Back in the Day BBQ” (BITDB). The day-long event took place at Blue Bell Park on Saturday, July 14th. Hundreds came and stayed for the duration of the BBQ, but some just stopped by to say “Hi.”

The BITDB, formerly known as “The Back in the Day Picnic,” is organized by a committee of friends, some who have known each other since childhood and who work throughout the year to plan this special day. The committee members are: Lynda Brown Bagley, Malcolm McGraw, Bobby W. Williams III, Barry D. Crawford, Michele Lewis-Bell Roberts, Donald Johnson, Norris Roundtree, Harold “Rusty” Frye, PhD and Keith Crawford.

The first BITDB gathering in 2009 was inspired by the loss of the group’s beloved friend, the late Michael Johnson, and was coordinated by Barry D. Crawford. A committee was formed the next year and since then the BITDB has become a well-known Philadelphia tradition. The determination to gather friends together for this occasion and not only for farewells continues.

“The Back in the Day Committee remains thankful for all of our friends, old and new, who come to Blue Bell Park each year to rekindle memories, eat, drink and remember all of our comrades,” Malcolm McGraw said, speaking on behalf of the committee. “We give a special thank you to Barry Crawford who originated the idea of having a joyous affair that brings us together.” 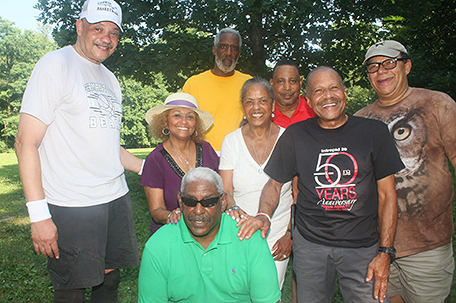 The entire committee for the event takes a group photo. (Photo: Robert mendelsohn)

“Every year we see many of the same people we have known for decades and miss those no longer with us,” he continued. “We see new faces, those who have never previously attended, and we see many who have traveled great distances to be with us. We have now been doing this for ten years without any drama, controversy or bad feelings. Our Back in the Day [BBQ] is built on a foundation of love and respect and the committee wants everyone to know how much, we appreciate their participation and attendance. Please keep coming, tell others, take and share photos and let us know how we can make this more enjoyable for everyone.”

Some Philly natives who moved away came back to town from near and far to attend the festivities, they included: Adolphus Chipper Lewis from Puerto Rico; Robert S. “Bob” Whitehead from The Dominican Republic; Michael Dutton from Washington, D.C.; John “Cheeks” Jones from San Antonio, Thomas “Satch” Saunders, Jr. from Chicago, Michelle Peni Thompson from Richmond, VA; Harry Drummond, also from Virginia and Barbara Blount Armstrong from Baltimore.

In addition to all the grilled hot dogs, hamburgers, chicken and Bobby Williams’ awesome pasta seafood salad, Gregory Coleman and Barry Crawford celebrated their birthdays with a beautifully decorated cake.

Most of the crowd hailed from Germantown and Mt. Airy, but many were originally from West Philly, South Philly, North Philly and neighborhoods across the city. There were people who attended high schools from all over the city including Germantown High, Girl’s High, Central High, West Catholic High, Overbrook High and West Philadelphia High. There were Deltas, Kappas, Ques, AKAs and more who attended Hampton, Howard, Temple, Cheyney, Villanova, Lincoln, Drexel and other well-known colleges and universities. Many have retired following successful careers as lawyers, teachers, business men and women, social workers, entrepreneurs, and healthcare providers, as well as other fields. And there were just as many in attendance who continue to be viable parts of the workforce.

It was great to see families come together in such a positive way. Many came with children, grandchildren, great grands and other relatives.  The Crawford Family was certainly well represented.

At the end of the day, friends formed a circle in remembrance of those no longer here but not forgotten. As their names were spoken, a dove was released into the clear sky as a symbol of peace and love.

We were blessed with another year of fun, laughter and appreciation for valued old friends and meeting new ones. It was a great time to be “All Around Philly.”

All Around Philly Social Scene

All Around Philly Social Scene: Hat and Tea Party