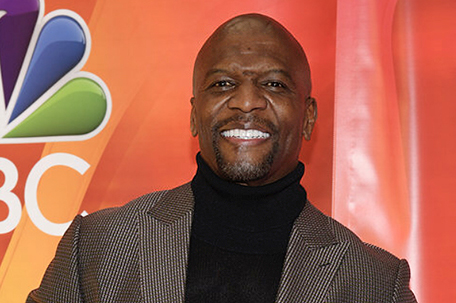 Terry Crews truly embodies the word multi-hyphenate, having been incredibly successful in various aspects of the entertainment world.

Born and raised in Flint Michigan, Crews beat the odds by earning an arts scholarship to Western Michigan before also earning a football scholarship. He went on to become a professional linebacker and defensive end in the NFL. Eventually, he found his true calling as a creative.

During a visit to Philadelphia, Crews participated in an intimate press luncheon at the LIFT Labs Comcast Technology Center and spoke candidly about navigating success, offering a wide variety of gems and life lessons and sharing what his fans could look forward to next.

As an actor, host, artist and comedian, Crews’s career spans over 20 years. Most attribute his success to his talent, which is vast, but he offers a different perspective.

“It’s not about talent to be honest,” he said. “I’m what I would call ‘un-embarrasable.’ I just do it and try it. What’s weird is that people don’t remember the failures… they just remember the successes as long as you keep going.”

Known best for his comedic roles in “White Chicks,” “Next Friday” and “Brooklyn Nine-Nine,” Crews’ knack for comedy is unquestionable. The source of his comedy however, may come as a surprise.

“You’re talking about a really volatile upbringing and the way that you deal with that is through comedy and laughing,” he continued. “To me, comedy is the medicine for hard times.”

Inspired by the trailblazing films and works of Spike Lee, Crews initially set out to be behind the camera, not in front of it.

“I wasn’t an actor. I was trying to get behind the scenes, I was trying to be more of a creative guy. It was in the middle of “Do The Right Thing” and “Hollywood Shuffle” where Black people were making their own movies,” he said. “I wanted to make a film.  I never saw myself in front of the camera until we (his family) went broke. I got an invite to do an audition and the first thing I ever auditioned for I got and I never stopped. I never knew it was my destiny.”

Throughout the luncheon, Crews emphasized the importance of knowing oneself and not allowing others to define or confine the gifts and creativity we all possess.

“One thing I had to do, was define who I was going to be and I called myself an entertainer. It’s a little more than actor, host, or personality,” he said. “It’s a very right-handed, left brained world where math and science get everything, but where they treat the arts as hobbies and side things… but it’s literally half of your brain. If you don’t emphasize the arts, you’re missing something. I think we need to lend some equality to that.”

In addition to the shift in thinking that needs to happen as it pertains to the importance of creativity, Crews also shared his thoughts on shifting the narrative of competition and fear of missing out within the entertainment industry.

“I had to remind myself and remind young people coming into the business — you never really miss anything,” he said. “The whole trick is to make you think you missed it. I was a bouncer. The club could be empty but you keep a line, so the image is this aura of inaccessibility… people feel like I have to get in there.  The trick that was played on me, when I had anxiety about not getting a project, is that you’re missing it and now I’m out — but you’re not out.  It’s just that that’s not for you, this is for someone else and your time will come.”

“I truly believe that competition is the opposite of creativity,” he added. “When you’re competing with another person, you’re actually doing something that hinders your own creativity. Once I got out of the competitive world, I was in a world of my own.”

Crews is certainly in a world all his own as the host of “America’s Got Talent.” He  expressed the joy he has experienced being part of the show, and what makes “AGT” special.

“AGT” is so good — the story is better than the act or the performance,” he said. “What did they go through? How did they get here? Oh my goodness, the obstacles. “

“The winner of “AGT” last year Kodi Lee is a man who could have been put into an institution and you would have never seen him again… that’s the reality,” he said. “The fact that he got on tv and showed us what he could do with severe autism;  he showed his gift, live in front of everybody. To watch it happen… that was the story of the century!”

“I’m telling you this is entertainment on steroids! ” he continued. “People are like ‘is this real?’ Instead of being based on a true story, let’s put some true stories out there. I would do this show for free… we’re giving dreams away.”

In addition to hosting “America’s Got Talent,” starring in “Brooklyn Nine-Nine,” and writing a new book — “Stronger Together”– with his wife Rebecca Crews due to be released later this year, Crews also is a furniture designer. The only question remaining is… what’s next for him?

“Film is the next iteration,” he said. “What’s wild is, I haven’t even started doing what I want to do. I have scripts, I have things I’ve written and I’m waiting for the time. In this industry you just have to wait it out. You literally have to hold onto your project and when the time is right… boom, there it is!”

You can see Terry Crews hosting “America’s Got Talent” every Monday at 8/7c on NBC. Mark your calendars for the return of “Brooklyn Nine-Nine” on Thursday, February 6 at 8/7c on NBC. To keep up with all things Terry Crews, be sure to follow him on social media at: @terrycrews.