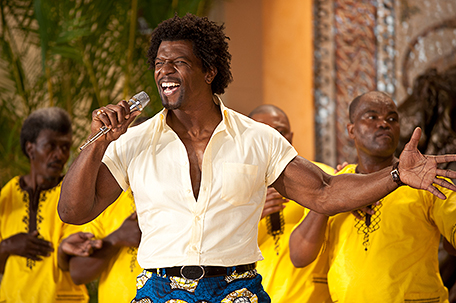 Since retiring from the NFL, Terry Crews has traded in his helmet and cleats to pursue an acting career while also becoming the ultimate family man and fitness enthusiast. Over the past several years, the omnipresent Crews has been seen almost everywhere, whether as the pecs-popping pitchman for Old Spice, portraying the overworked dad on “Everybody Hates Chris,” a tough guy in The Expendables film series, the loveable goofball in White Chicks, Will McAvoy’s bodyguard on HBO’s “The Newsroom,” or randy congressman Herbert Love in “Arrested Development.”

The year 2014 has been a busy one for Crews, who has already appeared in Tyler Perry’s The Single Mom’s Club, and in Draft Day opposite Kevin Costner. And later this year, he will be starring with Sly Stallone in Reach Me, and reprising the role of Hale Caesar in The Expendables 3.

Terry is currently a series regular on the Golden Globe Award-winning TV sitcom “Brooklyn Nine-Nine,” playing Sgt. Terry Jeffords, whose ripped exterior belies a sensitive and beleaguered interior. Crews also just added author to his resume with the release of his first book, “Manhood.” And it was recently announced that starting this fall, he’ll be hosting the game show “Who Wants to Be a Millionaire?”

Kam Williams: Hi Terry. Thanks for the interview.

KW: Congrats on the Golden Globe for your TV show, “Brooklyn Ninety-Nine.”

TC:  Thank you! It blew me away when we got that Golden Globe. What an honor! I had no idea.  It’s an awesome show and one of the best things I’ve ever done.

KW: And you get to play a complex character in Sergeant Terry Jeffords.

KW: I loved Blended, and I’m not a fan of Adam Sandler’s lowbrow brand of humor. But this one is different and kept me laughing non-stop.

TC: That’s great! And it touches your feelings along the way, too. That’s the thing. What’s so good about the Adam-Drew [Barrymore] collaborations is how she tempers him. It’s the real deal. Their 50 First Dates was the first comedy that I ever caught feelings on. I was like, “Whoa! I’m feeling the romance here. I want them to get together. Why do I care so much?” And I got emotional about it. That is what they bring, a magical combination that works every time.

KW: I liked the two of them in The Wedding Singer, too.

TC: They’re a great combination. My wife does that for me. By myself, I’m a hard pill. But, wow! My wife makes me look real good, because she smoothes my rough edges. That’s why I say, “Take your wife everywhere. It’s a good thing.” [Laughs]

KW: You provide the comic relief throughout this movie. Just when we’re about to forget about Nickens, he pops up again with that Greek chorus.

TC:  You know what’s wild? Adam called me up and before I’d seen a script, he said, “Man, I wanna do this movie with you that we’re shooting in Africa. Are you down, brother?” I had no idea what was going on, but I was like, “Let’s go! This is awesome!” I’m a card-carrying member of the Happy Madison Productions family. Adam put me in The Longest Yard, Click and The Benchwarmers. Every time he calls, it leads to nothing but great things. That’s why I just said, “Let’s do it!” We didn’t really have this character all straightened out. We sort of figured it out as we went along. He came up with a great idea. He said, basically, “Let’s make him the South African Tom Jones.” Once we had that, we were off and running.

KW: Had you been to Africa before?

TC:  No, that was my first time, and I loved every minute of it. I traveled all over South Africa. I was in Cape Town, Soweto, Sun City and Johannesburg. I would’ve visited Durban, too, but we just didn’t have the time. We met the most beautiful people and ate the best food! And we went on safari in Madikwe, which is near Botswana. It was amazing. Some people say Santa Fe is spiritual, but you haven’t experienced anything until you’ve been to Africa. You know the world is bigger than you are after you see Africa.

KW: I was surprised that they shot the film in Africa at all, since it’s a romantic comedy that could’ve been made in Hollywood, not a drama that called for an exotic location.

TC:  I think the moviegoers are tired of always seeing L.A. and New York. Come on! I think you can only do but so much here. It’s about time that the rest of the world is represented in entertainment. Africa is a huge continent. The world is gigantic. We get a little insulated. New Yorkers never go anywhere because they think everything’s already in New York. You can to Disney World or watch Mutual of Omaha’s Wild Kingdom, but you have to travel to Africa to have the real experience. And if you ever do go, it will change your life. I was changed. It was one of the best things I’ve ever done.

KW: What do you think about the 300 schoolgirls kidnapped in Nigeria?

TC:  Oh man, what can I say brother? I have four daughters. I consider myself a feminist. My whole life has been about standing up for women, for anybody really, who’s been abused. So, I’m outraged about the way they kidnapped and are mistreating those young ladies. That’s sick! All I can think about is what if someone took my daughters from me. It hurts. My heart is still breaking. You can post or tweet about it, but it’s not going to rest, until we find them and get them back home safe and sound. But nothing will change, until really righteous men stand up and say, “This is wrong! Females cannot be treated this way. Women are not property. Women are not second-class citizens.” Women all over the world deserve pay equal to men, a voice equal to men, education equal to men, and to be respected. We’ve got to realize that we’re all the same.

KW: Since you’re a former pro athlete and you live in L.A., I also have to ask you what you think about the L.A. Clippers. Should the owner be forced to sell the franchise for what he said?

TC:  Wow! This is what I think about Donald Sterling. We need to forgive him.

TC:  Let me tell you why. We’re all guilty of what he did. I’ve said things about my wife, which would make people think I was a horrible person, if somebody had recorded me. You say things in anger that you’d never normally say. If someone secretly records you in your own home, you’re going to offend somebody. Taking Donald Sterling’s team away from him, because people don’t like what he said doesn’t make any sense to me. I don’t know Donald Sterling. I don’t like him. We’ll never hang out. But let people vote with their dollars. You have to recognize that this is a dangerous precedent. If you don’t forgive, you’re setting yourself up to be judged forever. And as soon as you say something somebody doesn’t like, they can take what you own away from you. I know a lot of people disagree with me, but I just don’t believe in a system that doesn’t allow you to apologize, change and move on.

KW: That’s an interesting take. You surprised me. Food for thought.

TC:  It’s the new McCarthyism. It’s just not right. What I’m saying is that everybody has done it. You might not have said something about black people, but you might have said something worse than what Donald Sterling said, something horrible about your wife, your kids, your best friend, or someone else. If you can’t turn around, say “My bad. I’m sorry,” and be forgiven, then what do you do now? Are we going to hold everybody to that standard? People like to throw stones, but I say “Let he who is without sin cast the first stone.” We have to give mercy to get it.

KW: Attorney Bernadette asks: What advice would you give your teenage self, just coming of age, if you could travel back in time?

TC: I would say, “Terry, behave like a king.” Because, when I was young, I spent a lot of time behaving like a fool. And fools get mad when people try to give them good advice. They actually get angry at ‘em. [Laughs] Because by being a fool, you start messing up everything, and all of a sudden you want to blame everybody else. You’re a victim! It was my mother… It was my father… It was my wife… It was society… It was my being a black man… It’s endless. But when you behave like a king, you make no excuses, because it’s your court, your world, and you’re responsible for everything in your circle. That’s what I would tell my younger self. “Dude, behave like a king, and know it’s up to you.” That’s the deal. And I say it to young men now.

TC: Wooooo! Kam, that’s a big question. There are so many. I wanna be Radio Raheem, if they ever remade Do the Right Thing. [Chuckles] Yeah, I would love to play Radio Raheem. [Laughs some more]

TC: Wow! What superpower? Flight! It’s gotta be flight, because I love to travel.

KW: Is there any question I haven’t asked you that you wish I had?

KW: Then thanks again for the time, Terry. Good luck with Blended and your many projects. And I look forward to speaking to you again soon.

To see a trailer for Blended, visit: https://www.youtube.com/watch?v=_w168vuhjRo

To order a copy of Terry Crews’ book, “Manhood: How to Be a Better Man,” visit here.