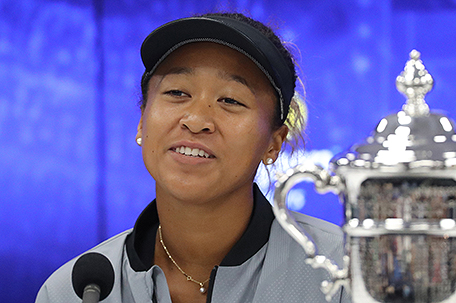 ABOVE PHOTO:  2018 US Open champion Naomi Osaka of Japan during press conference after her win at 2018 US Open women’s final match against Serena Williams.  (Photo: Shutterstock)

Osaka is reportedly working on a deal with the sports brand that is worth $8.5 million per year.

Tennis star Naomi Osaka is winning both on and off the court. After defeating Serena Williams, the 20-year-old Haitian and Japanese athlete has become a household name. According to Business Insider, Osaka is slated to make history by inking the biggest deal that Adidas has ever offered to a woman athlete.

Osaka is reportedly working on a deal with the sports brand that is worth $8.5 million per year, the news outlet writes. The deal could possibly make her one of the highest-paid women in the realm of sports; out-earning her tennis opponents. Osaka currently has a contract with Adidas for six figures which is ending this year.

It seems as if the Adidas deal is just the beginning of more endorsements to come for Osaka. She recently signed a three-year endorsement deal with Nissan to be one of their brand ambassadors. “With a combination of grit and grace, Naomi Osaka is not afraid to take on the best tennis players of our time, and win,” Asako Hoshino, Senior Vice President, Nissan, told the news outlet. Osaka is humbled to represent the brand and says she was drawn to Nissan because of its “strong Japanese DNA and global competitive spirit.”

Osaka’s win over Serena Williams at the 2018 US Open garnered a lot of attention after Williams was hit with a slew of unjust code violations for coaching, breaking a racket, and her exchange of words with umpire Carlos Ramos. Despite the drama surrounding the match, the tennis veteran displayed sportsmanship by giving her opponent encouraging words as the crowd booed the outcome. “She said that she was proud of me and that I should know that the crowd wasn’t booing at me. So, I was really happy that she said that,” said Osaka during a recent appearance on The Ellen Show.