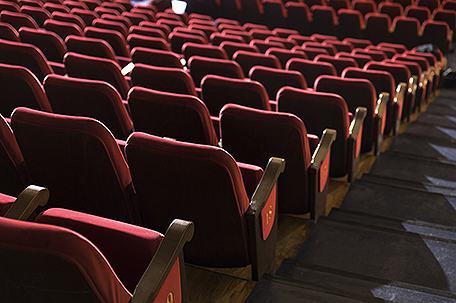 Specifically, the majority of participants in the survey (53 percent) said that the reason they saw fewer movies in the theater last year (2014) than in 2013 was because ticket prices are too high. Although, the National Association of Theater Owners (NATO), said the average price of a movie ticket in 2014 was $8.17, an all-time yearly high, it was only a slight increase from the 2013 average of $8.13. So that’s not really enough of a difference, year-over-year, to alter one’s movie theater habits, is it? Here in New York, tickets are almost double the nationwide average (some theaters do have matinee prices, but for the most part, the major chains are charging $12 to $16 per ticket these days, keeping a lot of New Yorkers away from theaters).

Although I should note that the $8.17 figure is more than double what the cost of a ticket was in the mid-1990s, when tickets were around $4. So, I suppose, compared to 20 years ago, ticket prices are high, but the increase has been steady over two decades. So you should expect prices to be higher.

Regardless, 53 percent of those surveyed said ticket prices are too high, and that’s what’s keeping them out of theaters, and staying home instead. There should maybe also be consideration for whether wages have kept up with the rise in ticket prices over the years.

The second most popular response was that movies just aren’t as good as they once were. I would agree with that, in an era dominated by sequels, prequels, adaptations of TV shows, remakes of old movies (or foreign movies), comic book superhero movies, etc. It’s assembly-line cinema these days. Good luck to the screenwriter or director with a wholly original idea, working in Hollywood! It’s all about big-budget, tent-pole movies with guaranteed international appeal, especially since DVD sales (once a cash cow for the studios), are pretty much in the toilet. Risk-taking is something very few studio heads are willing to do. Just consider Disney’s lineup for the next five years – Star Wars movies, Marvel superhero movies, and Pixar family movies.

Third on the list for why fewer are going to the movie theater, is having the freedom to see movies whenever they want to, or “on my own schedule” as the survey says. Thirty percent of participants checked that box.

Number four is that more folks prefer to spend their money on other things. Gone are the days when going to the movies was THE entertainment experience. Today, there’s so much competition for our attention, that it’s become less of an event.

Number five is the shorter window between when a movie opens in theaters to when it becomes available on home video platforms – a window that continues to be challenged, as some distribution companies are releasing movies on VOD before theaters, or, simultaneously. Amazon is getting into the distribution business now, as announced earlier this week, with the intent being, in part, to disrupt that process even further, shortening release windows between theatrical and home video, or bypassing theatrical altogether, which speaks to the third reason on this list – “being able to watch what I want, when I want.”

The full list of 10 reasons follows below. I’m actually surprised that number 10 on the list (the annoying cell phone and tablet disruptions) isn’t much higher on the list. It would be much higher on mine. Drives me nuts, especially given how prevalent it is.

After checking out the list below, I’d like to take a similar poll here on S&A, so please participate: First, do you find that you’re going to the movie theater even less?  And if so, why is that (list you top three reasons)? What I’ll then do is compile all the results (assuming I receive a healthy number of them), and repost in a few weeks, if only to compare them with the PricewaterhouseCoopers survey below:

Ticket prices are too high – 53 percent

Movies are not as interesting as they once were – 41 percent

Prefer movies “on my own schedule” – 30 percent

Prefer to spend money on other activities – 29 percent

Can see movies at home shortly after theatrical release – 24 percent

Prefer going out to dinner – 19 percent

Too many people using phones and tablets in theaters – 10 percent

Top ten reasons why people of color should care about sequestration

(Eight) Black films to see in theaters this month (October)