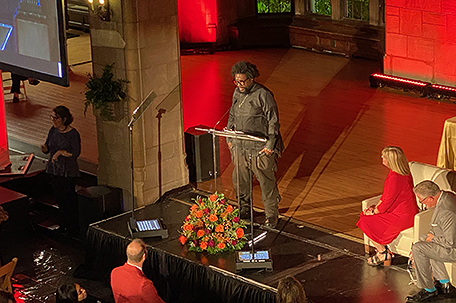 You don’t describe him at all, you just call him “Questlove.”

On Sunday, October 23, the leader of The Roots,  Ahmir “Questlove” Thompson, was given one of the highest honors granted at Temple University — the Lew Klein Excellence in the Media Award. The award is not based on accomplishments at Temple or through the university, but is presented to someone whose work and career serves as an inspiration to its students.

Before being honored at a ceremony that evening, Questlove sat in front of an eager group of students and gave them an opportunity to pick his brain.

“What’s the best place in Philadelphia to listen to music?’’ shouted one student.

“How do you heal from your personal trauma?” asked another.

“What are you doing here right now? The Phils are in the playoffs,” said another student jokingly. The Phillies were in the middle of game 5 of the NLCS against the Padres — a game they would go on to win.

“I had the opportunity to be at the game, but I chose to be here with you,” Questlove said. “This is more important.”

Questlove’s very presence was awe-inspiring. You could tell by the sheer number of students who resisted the urge to be on their phones. How could someone who seemed to be so relatable, who had a similar upbringing to nearly everyone in that room end up with so much success in so many areas?

“What’s one piece of advice you have for someone who doesn’t want to conform to one specific genre of media?” asked one student.

“If you have a passion, step into it,” Questlove answered back. “There will always be a voice of self-doubt. It’s up to us to ignore it. I used to live under fear. I would manage my expectations for failure, but it wasn’t until I began to undo those toxic labels that weren’t serving me that I could take the next step in walking in my purpose.”

Many young musicians attended the event as well. One of them asked a question that most artists would inquire about — “What do you do when nothing comes to mind?”

Questlove’s answer was surprising to some.

“I recommend boredom,” he answered, receiving a chuckle from his audience. “When you’re on this creative quest and looking for a spark, I suggest you sit quietly for about twenty minutes until the noise finally subsides. Out of that boredom comes some of our most creative work.”

Hundreds of people in attendance hung on Questlove’s every word, all of them listening intently and taking notes as he dropped gem after gem. But while Questlove’s name may have come with heavy star power, several other changemakers in media were being honored by the university that same day.

The school honored other shining examples of success from the Klein College of Media and Communication. Ray Boyd was given the “Rising Star” award. In addition to his top-notch work for the Philadelphia Inquirer, Boyd continues to advocate for local journalism and journalists of color. Another journalist recognized was the late Eugene Kane. Kane spent most of his career being a champion for journalism and North Philadelphia while working in Milwaukee, Wisconsin. While Kane was the only journalist to receive the award posthumously, having lost his life in 2020, his family has been working with the university to create and grow a scholarship that provides financial assistance to graduates of public high schools in the Philadelphia School District who enroll at the Klein College of Media and Communication.

At the end of the night, Questlove took the stage again to add to his forever-growing trophy case. Although the setting and audience changed from when he spoke to Temple students to when he was awarded by Temple’s brass, the impact of his words remained the same.

Questlove spoke of his upbringing in Philadelphia, his early love for music, and how his family has been one of his greatest influences. He spoke of humble beginnings, like playing drums on the street for tips and hoping to scratch up enough for a late night trip to Wawa. But what stood out most was his grasp of what it truly meant to be a “creative” and where he draws his inspiration. He likened it to being in touch with his inner child.

“You have to go back to your mindset of when you were eight years old,” Questlove. said “I don’t want to just be tied to working. I want things to be fun for me as well. I want my passion to be something that I enjoy, something that serves me.”

In addition to still being an active member of The Roots, Questlove says he’s working on more than five different projects, including a music documentary focusing on the groundbreaking band, Sly and the Family Stone. He also aims to preserve the music of the past while creating the media of the future.