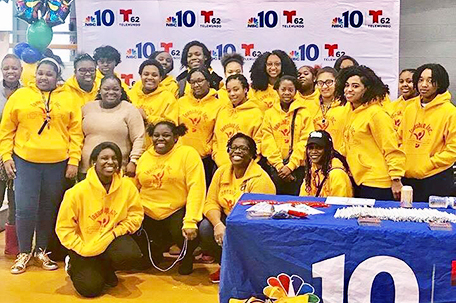 When the COVID-19 pandemic hit in March, Teenshop transformed its program delivery from community-based sites to virtual to ensure that girls could continue participating in its empowerment workshops that help them achieve their goals.

“We realized that now, more than ever, girls need to stay connected to our caring leadership teams and chapter members to support their social and emotional well-being as they navigate this new normal.

When it’s safe, we hope to resume some site-based workshops, but we will also continue serving girls online.”

Teenshop is a volunteer-based weekend college preparatory and life skills program Hendley founded on June 15, 1985 while working full-time as a broadcast journalist at Philadelphia’s CBS 3 TV.

The nonprofit has grown to five chapters in three states – Los Angeles; Camden, NJ, and three chapters in Philadelphia, each led by a five-member volunteer team of career women.

Teenshop is proud of its 100% college acceptance rate. More than 100 members enroll annually, and there are thousands of alumna, several of whom are working as leaders in their former chapters.

The virtual anniversary celebration which is taking place on June 15,  from 4:00 — 4:30 p.m. —  will include honoring two community leaders whose ongoing support during the past three plus decades continues to sustain the program: Charisse R. Lillie, Esq., CRL Consulting LLC, and Sharmain Matlock-Turner, president and CEO of the Urban Affairs Coalition.

As Hendley looks to the future of advocating for girls, she has created an  initiative called the Girls With Goals Collaborative, which held its first annual Empowerment Conference in partnership with the Philadelphia District Attorney’s Office on March 7 in the Atrium of the Philadelphia School District.

More than 30 organizations participated to share their resources with girls throughout the area.

“Especially during this new normal, it’s critical that all girls are aware of programs and resources that support their positive development and help ensure the best possible outcomes for their futures.”

Teenshop provides an empowering experience for “girls with goals”