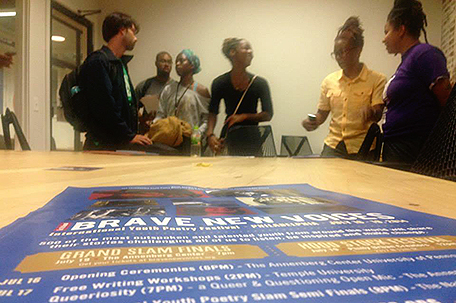 The voice of the 21st century resounds in Philadelphia, as the 17th Annual Brave New Voices International Youth Poetry Slam makes its way to the city, July 16-19, 2014. Five hundred young poets and spoken word artists, aged 13-19, will convene in Philadelphia, representing 50 parts of the country and five additional cities from across the globe. The subject of a hit HBO series, Brave New Voices (BNV) will capture teenagers picking up the pen and taking hold of the microphone with passion, creativity and power.

At the heart of Brave New Voices is a multi-round poetry slam competition, shining a spotlight on young artists, educators, poets, and emerging leaders from around the world. From the quarter finals to the final showdown, this impassioned demonstration of free speech, artistic empowerment, and youth voice will foster a community of dialogue in celebration of “Possibility.” In addition to the slam competition, BNV participants will have the opportunity to engage in world-class workshops with renowned poets and writers, complete various youth development programs, and discover and develop the skills to become America’s next generation of leaders.

During the four-day festival, 54 events will take place on the campus of the University of Pennsylvania, as well as at various community-based theaters, major performance venues, and public spaces across Philadelphia. The Festival schedule, subject to updates, is as follows:

Brave New Voices 2014 kicks off with an opening invocation and set of performances featuring many of the most talented and inspiring young artists in Philadelphia.  This presentation will also honor the passing of iconic writers and activists Maya Angelou, Amiri Baraka and Yuri Kochiyama.

We are investing in a conversation where those who stand to lose the most are not policed and asked to tone down their intelligence or fervor. We want allies—yes, but allies that are challenged, transformed, and engaged. We want safe spaces—yes. We want ones where we—all of us—can be fully ourselves.

Held in a different city each year, the festival will make its way to the City of Brotherly Love for the first time since its inception in 1998. Created by Youth Speaks after the inaugural Youth Speaks Youth Poetry Slam in San Francisco, BNV is the first youth-centric poetry slam in the nation’s history. Since that time, BNV has grown to represent youth from across the United States, Canada, Africa, the Polynesian Islands, and Europe, making it the largest and most diverse ongoing spoken word event in the world.

Founded in 1996, Youth Speaks is the leading nonprofit presenter of Spoken Word performance, education, and youth development programs in the country. Youth Speaks first produced The Brave New Voices International Youth Poetry Slam in 1997, and has since been an important cornerstone of Youth Speaks’ annual programming.