TCM shines a spotlight on female directors and their art 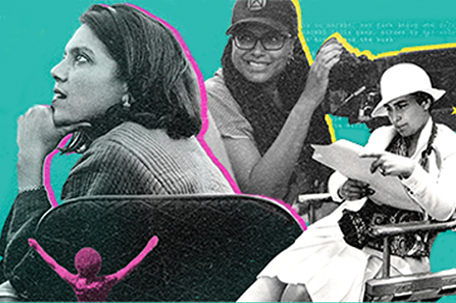 Women have been making great films since the silent era, although you might not know it to look at a list of the best films of all time. The American Film Institute’s top 100 famously does not include any female directors at all.

But Turner Classic Movies is helping craft a revised history of women in film with an epic series programmed around a groundbreaking 14-hour documentary by film historian Mark Cousins entitled “Women Make Film: A New Road Movie Through Cinema.”

Every Tuesday night through December audiences will be treated to one hour of Cousins’ docuseries, which exhaustively examines the work of some 183 directors from around the world, narrated by the likes of Tilda Swinton, Thandie Newton and Jane Fonda. After each installment, the night continues with thematically relevant films commentary from directors like Mira Nair, Kimberly Peirce and Nicole Holofcener. In total, TCM has programmed 100 films directed by women from A (as in Dorothy Arzner ) to Z (as in Mai Zetterling ), that span 12 decades and hail from 44 countries and six continents.

Film historian and TCM host Alicia Malone, who has written books on women in film, said she was surprised by just how many films she had never seen in the programming and the documentary. Malone and fellow TCM host Jacqueline Stewart are leading discussions with some contemporary filmmakers around the evening’s programming.

“I consider myself to be someone who has made an effort to learn about movies made by women, to seek them out and to watch them whenever I can,” Malone said. “For me to find movies and filmmakers that I’ve never heard of is both maddening and thrilling.”

And she wasn’t the only one to find herself reaching for her notebook and making a list of films to watch. “Born in Flames” director Lizzie Borden said she “went into study mode.”

“I’ve been seeing excerpts and thinking, why don’t I know about this film?” Borden said. She’ll be featured on Night 10, airing Nov. 3, and focusing on melodrama, sci fi and horror. Films that evening include Ida Lupino’s rape culture-themed “Outrage” (1950), Ann Hui’s Vietnam-set “Boat People” (1982) and Lois Weber’s silent film “Shoes” (1916), about a shop girl who needs a new pair.

“’Outrage’ is an extraordinary film to watch after the #MeToo revelation,” Borden said. “Ida Lupino has always been compared to Dorothy Arzner. But she’s nothing like Dorothy Arzner. And it’s only because there have been so few visible women. It’s an unfair comparison. Her films are so interesting! She’s reflecting an inner life of women going into the ’50s.”

Borden also said the documentary has made her appreciate films she’s seen many times even more, including her friend Kathryn Bigelow ’s Oscar-winning “The Hurt Locker” (which will be airing on Nov. 10. She likened it to a film school.

“It encourages your mind to be really active,” Borden said. “I never took apart an action scene that (Bigelow) does the way Mark Cousins does or count the number of shots as he does.”

“Boys Don’t Cry” director Peirce, whose “Stop-Loss” is airing on Oct. 20 during Night Eight, is excited to showcase the breadth of experience of female filmmakers throughout history.

“It’s a miracle if you’ve seen any woman’s content,” Peirce said. “And if you know a woman’s name, that’s awesome because it means she probably made more than one movie. I don’t think I’ve met a woman artist who doesn’t know that her career should have been tenfold from what it is.”

Peirce spoke about Arzner bucking the system and going from the script department to editing to directing and making the pre-code romance “Christopher Strong” with Katharine Hepburn and about Italian filmmaker Lina Wertmüller, the first ever woman to be nominated for a best director Oscar, who produced avant garde plays and designed sets before she picked up a camera.

Sure, they may the only jobs available to them on the path to directing, but, Pierce said, the problem is also the solution: The odd jobs made them better directors.

The good news is the numbers seem to be getting better. 2019 was a “banner year” for female directors. And Cousins’ documentary and the subsequent discussions will also help advance the conversation about women directors by focusing on their art and not just statistics.

“What we can do is start to celebrate the films that we have, the filmmakers that are making these movies and also talk to them about craft, which is something female filmmakers rarely get to do,” Malone said. “Usually, and I’ve been guilty of this, we talk to female directors only about being a woman in the industry and we talk to male directors about their craft and their technique.”

Peirce, who is helping to enact change in the industry as an Academy Governor and on the leadership team of the Directors Guild, said she often finds herself on panels and in documentaries talking about being a female filmmaker.

“A lot of the living filmmakers, we’re friends with each other, we’re a support system and we’re a really beautiful community,” she said. “And we’ve all been fighting the fight to tell our stories, tell stories well and tell the stories of women telling stories.”

And now they have another ally in TCM.

Mati Diop on being the first Black female director in Cannes