Tatum and team turn up the titillation in sequel 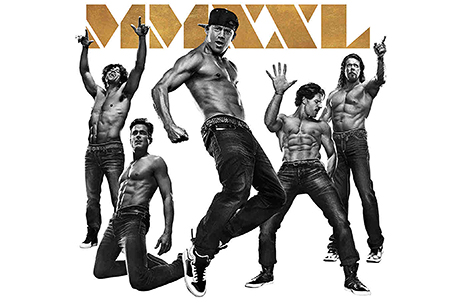 What made the original Magic Mike so appealing was it’s raw-edged, realistic feel that made you forgot you were even watching a movie. This relatively-superficial sequel tosses the notion of plausible character and plot development out the window in favor of a sensual take the money-and-run sequel focused squarely on titillation.

Yes, Channing Tatum has returned in the title role, but conspicuously absent are Matthew McConaughey, Olivia Munn and a couple of other actors critical to the success of the original. Also gone is the picture’s legendary director, Oscar-winner Steven Soderbergh (for Traffic) who retired in 2013 out of frustration with the film industry.

XXL picks up three years after the ending of the first episode, conveniently ignoring the fact that Mike had specifically left stripping for a legit line of work in order to walk off into the proverbial sunset with a grateful girlfriend. At the point of departure, we find Mike single again and flourishing as a furniture designer. He is soon duped into attending what is supposed to be the wake of Dallas (McConaughey), his former boss at the notorious nightclub known as Xquisite.

Upon arriving, however, Mike learns that Dallas is alive and well and living in Macao. The deceitful death notice was just a ruse concocted by pals to pitch him on participating in a reunion of The Kings of Tampa. That brawny brotherhood of hunky dudes with whom he’d once shared the stage is now interested in taking their bawdy burlesque show on the road.

Already signed on are Tarzan (Kevin Nash), Big Dick (Joe Manganiello), Tito (Adam Rodriguez) and Ken (Matt Bomer), as well as rubbery eunuch Tobias (Gabriel Iglesias), who’s been enlisted to serve as the chauffeur of their food truck-turned-tour bus. The plan is to drive from Florida to Myrtle Beach, South Carolina to perform in a competition at the annual strippers convention.

It doesn’t take much in the way of arm-twisting to bring Mike aboard, and the next thing you know the motley crew is cutting a swath across the South, making stops to strip at seedy dives along the way, a big exception being the upscale establishment run by Mike’s ex, Rome (Jada Pinkett Smith), which caters to a predominantly black clientele. Among the buff bods in her sepia stable are Andre (Donald Glover), Augustus (Michael Strahan) and Malik (Stephen “tWitch” Boss).

Magic Mike XXL was directed by Gregory Jacobs, best known for the made-for-TV Liberace biopic, “Behind the Candelabra”, which landed 11 Emmys in 2013. Too bad he apparently couldn’t be bothered with crafting a credible story line for this disappointing, big screen production.

An unabashedly carnal indulgence solely interested in inducing gelatinous drools of saliva from the mouths of overstimulated females.

To see a trailer for Magic Mike XXL, visit: https://www.youtube.com/watch?v=oLoyU3xYwbs

‘Magic Mike’ taught Pinkett Smith to be playful with husband