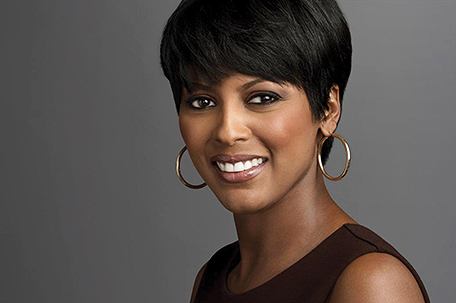 The “Today” family is growing with a familiar, friendly face: Tamron Hall has been named a co-host of “Today’s” Take, the 9 AM hour of “Today” joining fellow hosts Al Roker, Natalie Morales and Willie Geist. The announcement was made Monday morning on “Today.”

Hall, 43, has been filling in regularly on the show, reading the news, covering special events like the Golden Globes, and spotlighting buzzy social media trends in in “Today’s” digital studio, the Orange Room. “We’re really excited to officially welcome Tamron into the “Today” family,” said Don Nash, “Today’s” Executive Producer. “She brings wit, enthusiasm and a keen sensibility to an all-around fantastic team, and I think Tamron, Al, Natalie and Willie will have a lot of fun together hosting the third hour.”

A regular fill-in host on “Today,” Hall has most recently interviewed Hugh Jackman, Mariah Carey, and Instagram’s CEO Kevin Systrom. She has frolicked with puppies in the Orange Room, sprinted across the “Today” plaza in heels, and taken on senior basketball phenoms, the Tigerettes. (In one instance during that fun-filled showdown, Tamron revealed her strength with a shot that sailed right over the backboard!)

The veteran broadcast journalist also has shared personal stories on the show. As part of “Today’s” #InspiredBy series, Tamron talked about the man who inspires her and whom she “fondly calls my dad,” her stepfather, Clarence Newton Sr. And for “Today’s” Shine a Light series, Hall worked to raise awareness about domestic abuse in memory of her sister, Renate, a victim of domestic violence.

Hall earned her degree in broadcast journalism at Temple University and began her reporting career at KBTX -TV in Bryan, Texas. From there, she moved on to KTVT-TV in Dallas and to WFLD-TV in Chicago, where she worked for 10 years and covered Chicago politics.

In 2007, she joined NBC News and worked as a reporter and fill-in anchor at MSNBC before becoming anchor of MSNBC’s NewsNation with Tamron Hall. She has hosted several special reports for MSNBC and NBC News, including “Making the Grade;” “Debating the Black Agenda;” several “Dateline” and “Rock Center with Brian Williams” pieces; the 2012 London Olympics; and “Education Nation: Teacher Town Hall,” which was nominated for an Emmy Award in 2011. She also served as correspondent of the NBC News special “The Inauguration of Barack Obama,” which won an Emmy for Outstanding Live Coverage in October 2010.